'They're afraid of this president': Sen. Sherrod Brown calls out Republican fear 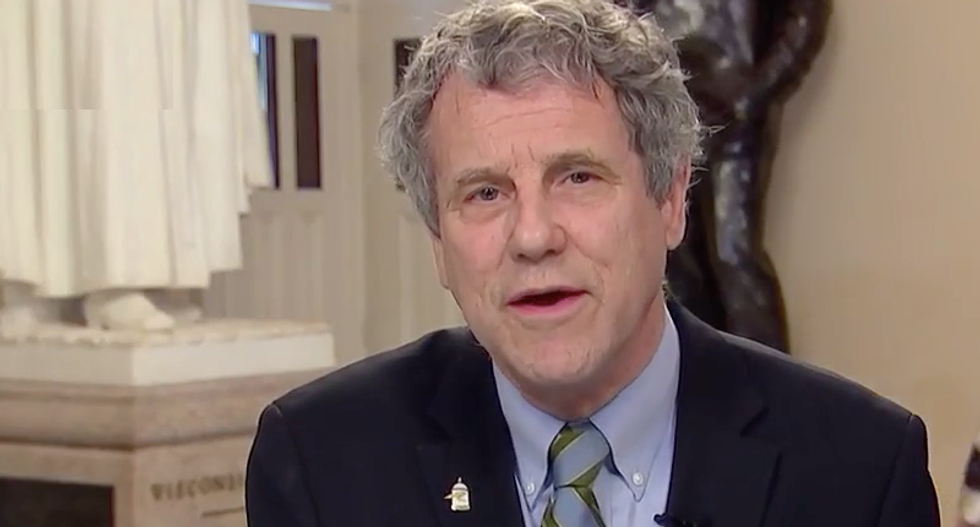 The Senate took a break during the impeachment trial of President Donald Trump Tuesday, and Sen. Sherrod Brown (D-OH) said that it has become obvious that Republican senators are afraid of being attacked by the president.

"I think that most of my Senate colleagues know that you can trust John Bolton more than Donald Trump," he said. "I hear the grumbling about this president. You know it, too, Nicolle, because of where you used to work and the people you know. Some are 'Never Trumpers,' but a lot of them aren't. You've just seen in this body that fear now kind of does the business. Republicans like the tax cuts and the young extremist judges. They're afraid of this president."

He explained that the senators are afraid of being attacked by Trump with a nickname like "Lyin' Ted" or "Low-energy Jeb."

"They have that fear that the president will come into their states and campaign against them," he said. "And fear really does the business."

He remembered during the Iraq War vote that there were accusations going around about being soft on terrorism and not protecting the country if you didn't vote for the war. It scared so many members politically that many voted to authorize the war when the didn't want to. It obviously ended up to be the reverse.

"When fear does the business, we don't act well as human beings, and that's what you've seen taking over the Senate Republican Conference," Brown explained.

Host Nicolle Wallace said that she found it interesting that the role of fear is so prominent to these Republicans.

"I watched from a distance Saturday all the sort of pearl-clutching of Republicans who were so offended that Rep. Adam Schiff (D-CA) had quoted that CBS report about Trump campaign political associates talking about their -- just mentioned it," she said. "It's a CBS report, a credible news organization. I've watched that news organization. They haven't pulled back any of that reporting. They stand by it. That is obviously what's going on. I think there will come a time when they'll welcome the fact that they were bullied and intimidated because it's a better explanation if they come down on the wrong side or as Claire [McCaskill] predicts, if 35 to 40 of them vote against witnesses, being corrupted by the Trump White House."

McCaskill specifically called out the hypocrisy of the Trump White House attacking the Biden family accusing them of nepotism when Trump's family is profiting off of the White House.