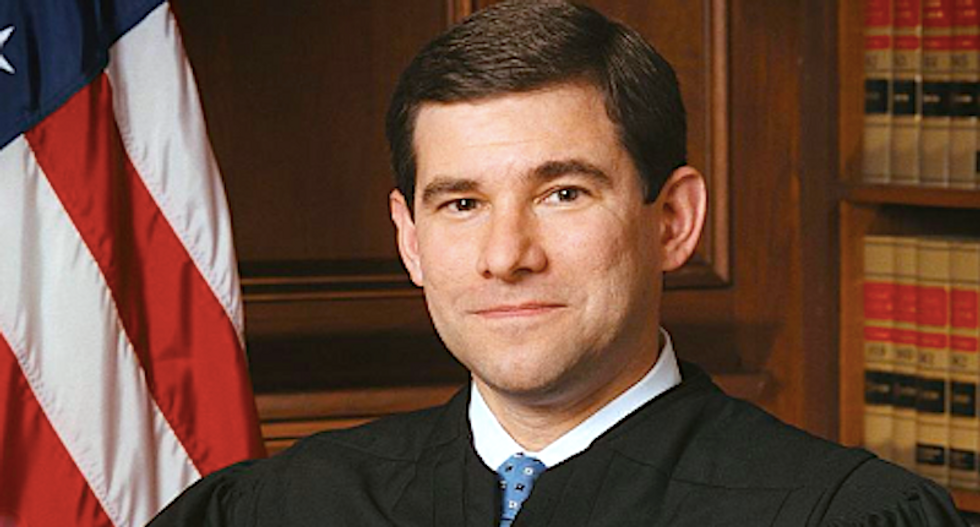 Judge William Pryor of the 11th U.S. Circuit Court of Appeals wrote a lengthy dissent last week in a Florida case that so alarmed another conservative judge on the panel that she then wrote a less radical concurrence to his message that God can instruct juries, reported Slate.

The case involves former Rep. Corrine Brown, a Florida Democrat who was found guilty in a fraud and tax evasion case, and she appealed her conviction because the judge removed a juror who claimed God had told him the ex-lawmaker was not guilty.

That man, Juror 13, had told other members of the jury at the start of deliberations that a "higher being" had told him Brown was not guilty on all counts, and the judge questioned the man -- who insisted the "Holy Spirit" had instructed him on reaching a verdict.

Defense attorneys, naturally, wanted the man to remain on the jury, but the judge instead replaced him with an alternate juror.

Brown appealed his removal, but the appeals court ruled that jurors may pray for guidance in a case but cannot render an impartial verdict when they believe God's word, and not the evidence presented in court and the judge's instructions for deliberations, should form the basis of their verdict.

Pryor, however, argued that Juror 13 was the victim of discrimination by the judge, and he insisted that the juror's removal would embolden attorneys to "target and eliminate certain demographics from jury service."

“African American and evangelical Christians are more likely than others to believe that God speaks to them," Pryor wrote in his 55-page dissent, "and the majority’s decision now requires that these eligible jurors be stricken for cause if a discriminating lawyer elicits during (jury selection) that God communicates with them.”

Pryor argued that the juror's claim of divine commandment might have been true, and he argued that perhaps more juries might consult "the Holy Ghost" when deciding cases.

His colleague Judge Anne Conway, a George W. Bush appointee, tried to clean up Pryor's unusual dissent by explaining what it did not mean.

“This is not a case which turns on a juror’s religious beliefs or religious freedom to engage in prayer or seek guidance during deliberations when applying the law to the evidence in the case,” Conway wrote. “Rather, it is a straightforward case about whether the district court — having concluded based on direct questioning that a juror was not following the court’s instructions — abused its discretion in dismissing that juror.”