Trump has been mysteriously ignoring Melania's initiatives in his major speeches: report 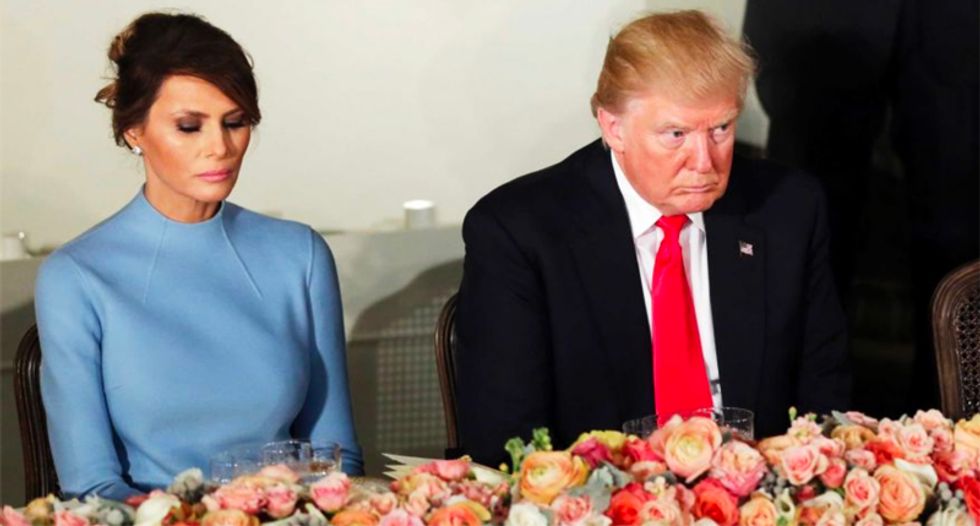 According to a report on Politico, an analysis of Donald Trump's State of the Union addresses shows that the president has neglected to boost his wife's most notable achievement in her three years as first lady -- apparently at the urging of aides who feel it is best not to bring it up.

Traditionally, first ladies take on a cause after settling in and Melania Trump has been no different, launching her "Be Best" campaign aimed at halting online bullying. However, that campaign has been ignored by the president in all of his major speeches where he has touted his administration's accomplishments.

"As her own husband prepares to deliver his fourth joint address to Congress next week, Melania Trump‘s “Be Best” — the name of her anti-cyberbullying campaign — is still waiting to make a cameo. In past years, the only recognition she received was a hand wave to the House gallery," Politico reports. "For three years in a row, Trump has declined to mention his wife’s initiative in his annual remarks to lawmakers, a review of transcripts shows."

This raises the question as to why, with some Beltway observers speculating that Trump mentioning an anti-bullying campaign would open him to a wave of ridicule considering his Twitter name-calling and attacks on opponents real and perceived.

"Some associates suggest the omission is deliberate; perhaps the president’s aides want to protect him from getting mocked during the widely viewed address," the report suggests, with a former Barack Obama speechwriter adding, "I think his speechwriters know that Donald Trump talking about an anti-bullying initiative is ironic at best, and you don’t want people laughing during the middle of a State of the Union address."

Politico goes on to note that Trump likely has his own reasons for not touting her initiatives because he is, at his core, a self-promoter.

"The lack of attention Trump has paid to his spouse in the annual high-profile speech also raises questions about existing relations between his inner circle and the East Wing," the report notes. "While his predecessors often indulged the American public’s fascination with first ladies, Trump has demonstrated a preference for keeping the spotlight on himself — particularly in high-stakes moments like the State of the Union, where his penchant for unpredictability kept lawmakers in previous years guessing whether Trump the fighter or Trump the peacemaker would show up on Capitol Hill."

Politico does point out that the president has highlighted some of Melania Trump's initiatives, but at times has failed to mention her connection to the project.

"To be sure, Trump has given significant attention to his wife’s initiatives in other settings. The duo hosted a White House summit on the opioid epidemic in March 2018, shortly before the first lady unveiled her three-pillar platform, which includes youth opioids awareness. Trump mentioned the opioid crisis in his 2019 State of the Union, but did not discuss his wife’s efforts on the issue," the report states with Lauren Wright, a lecturer on the presidency, saying the president is wasting using her popularity that rivals his own.

“A major tool in the White House’s arsenal is the first lady’s popularity and image, and Melania Trump has been severely underutilized by this administration,” Wright explained. “If anything, they don’t think about the East Wing as a strategically valuable part of the White House, which it has been in past administrations.”