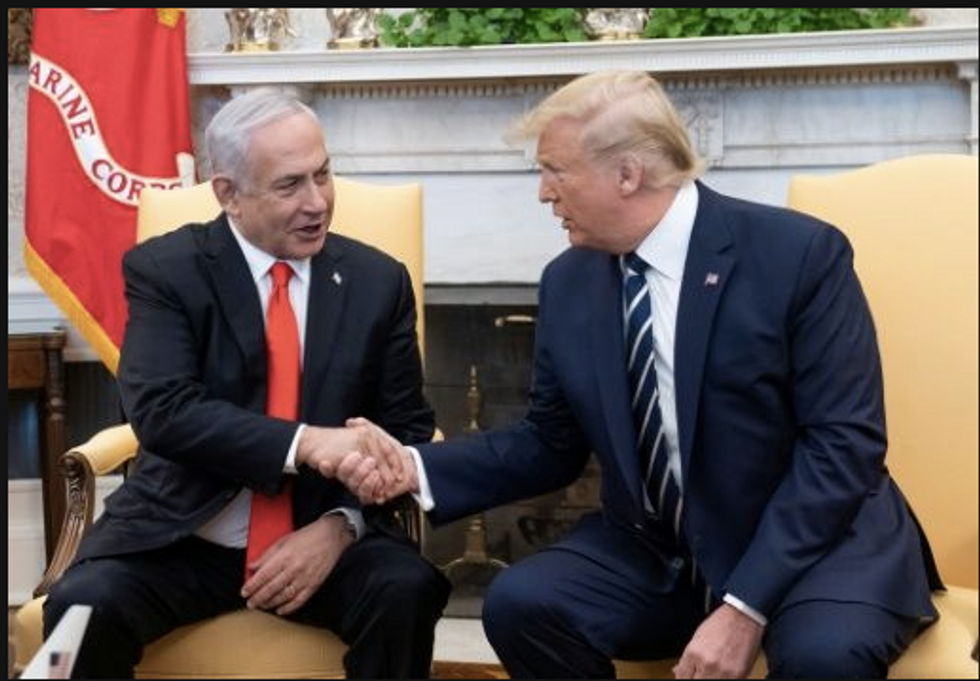 US President Donald Trump on Tuesday will ignore accusations, led by the Palestinians themselves, of pro-Israel bias and unveil what he says is a peace plan capable of solving the Israeli-Palestinian conflict.

Long held secret, the plan will finally be aired jointly by Trump and visiting Israeli Prime Minister Benjamin Netanyahu at the White House.

Given that it has been rejected by the Palestinians, the latest of many US proposals to address the bitter, multi-generational Mideast conflict might seem to have little future.

But Trump insists he is optimistic and whatever happens, both he and Netanyahu could reap political benefits as they battle respective domestic scandals.

"It might have a chance," Trump said of the plan at an initial Oval Office meeting with Netanyahu on Monday.

Trump, whose impeachment trial in the Senate is entering a critical phase, said his plan was getting widespread support from "many of the Arab nations" and claimed that even Palestinians would come round to the idea.

"It's very good for them, in fact it's overly good for them," Trump told reporters. "We think we will have ultimately the support of the Palestinians."

Netanyahu, praising Trump as "the greatest friend that Israel's had in the White House", described the peace plan as "the deal of the century".

“It comes just before an Israeli election [and] we heard yesterday Donald Trump saying that he couldn’t wait any longer for the paralysis in Israeli politics when he was releasing it,” she said.

Netanyahu also faces corruption charges, as well as a tense election in just over a month in which his right-wing Likud party is neck-and-neck with Benny Gantz's centrist Blue and White party.

On Monday, Trump also met separately with Gantz, but the limelight fell almost entirely on the incumbent prime minister - as will any political dividends from a peace plan favoring Israel.

No Palestinians have been invited to the White House event. They say they were never included in crafting the plan, which was overseen by Trump son-in-law Jared Kushner.

Palestinian Prime Minister Mohammad Shtayyeh on Monday urged international powers to boycott the plan, which he said was designed "to protect Trump from impeachment and protect Netanyahu from prison".

"It is not a Middle East peace plan," Shtayyeh told a cabinet meeting. "This plan gives Israel sovereignty over Palestinian territory."

FRANCE 24’s Makler said that the Palestinians would hold an emergency meeting at the same time as Trump announces the plan, and that several protests against it will be held through Friday.

The plan, whose details still remained under wraps up to the last minute, has been gestating for so long that skeptics asked whether it really existed.

Aaron David Miller, a Mideast expert with the Carnegie Endowment for International Peace, said Kushner's team wants to "finally, basically demonstrate that they have a plan" - and to do so ahead of the US presidential election in November.

Trump has already thrown Netanyahu a string of political presents throughout his first term.

These include breaking with international diplomatic consensus to recognize the disputed city of Jerusalem as the Israeli capital; recognizing Israeli sovereignty over the Golan Heights, which were seized from neighbouring Syria; and ending opposition to Israeli settlements on occupied Palestinian land.

Last Thursday, Trump described the still-unpublished peace plan as "great" and said it "really would work".

But on Sunday, Palestinian leaders warned that instead of bringing peace, the plan could trigger their withdrawal from key provisions of the decades-old Oslo Accords, which sought to map out peaceful Israeli-Palestinian relations.