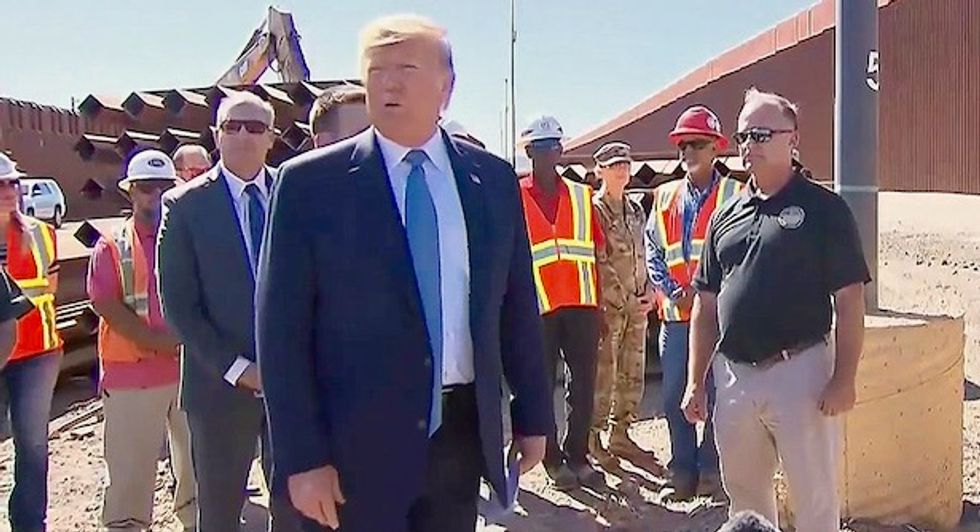 Just this week a part of President Donald Trump's border wall collapsed under heavy winds. It highlighted one of the obstacles to Trump's Mexico border barrier.

Ironically, the threat of climate change will be brutal on Trump's wall. Flash flooding, high winds, hurricanes and other storms, and dramatic swings in temperature can ultimately make the wall more susceptible to issues.

The Washington Post reported that the Trump border barrier project will require the installation of hundreds of large storm gates that will remain open for months every summer to keep the border wall from being damaged or falling over.

Lee Baiza, who was previously the park superintendent for the Arizona’s Organ Pipe Cactus National Monument explained that the president's border project will further increase the risk for flood damage, because the work crews have loosened dirt, plants and rock along the road, which can be more easily carried away in floodwaters.

“It’s a fragile environment, so if you go drive across that country you will loosen up the soil and brush,” the Post quoted Baiza. “The more activity, the more it gets run over, the more debris you create.”

"Another section of border barrier toppled in 2014 near Nogales, Ariz., when U.S. agents failed to open the floodgates in time, sending mud and stones into nearby homes," the report explained. "And in 2008, two people in the Mexican city of Nogales, just across the border, were killed in catastrophic flash floods that inflicted millions of dollars in damage, with some of the blame falling on a Border Patrol project that placed bars into cross-border culverts intended to block illegal crossings."

Having open gates to protect against flooding for months on end poses questions about the function of the wall itself.