Trump's killing of Suleimani was a gift to resurgent ISIS in Iraq: Middle East experts 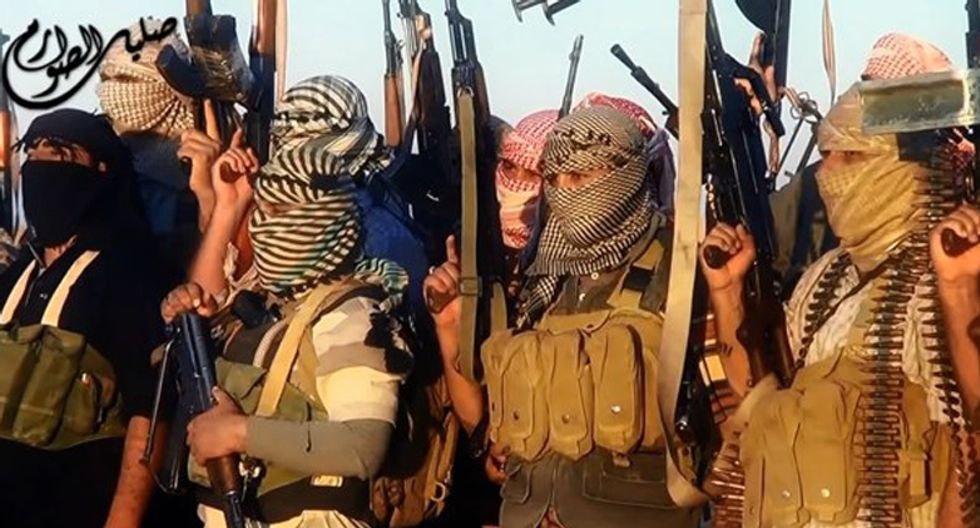 A still photo from a propaganda video by the ISIS jihadist group allegedly shows militants near the central Iraqi city of Tikrit. (AFP)

According to Middle East experts, Donald Trump's decision to kill Iran military leader Qassem Suleimani was good news for ISIS insurgents who had previously been on the ropes since he had been at the forefront of fighting them in Iraq.

Business Insider reports, "some experts have raised concerns that tensions between the US and Iran may actually embolden a common enemy, the Islamic State, which could seek a resurgence amid the chaos created in Iraq."

"While the US and Iran have had no formal diplomatic relations since 1980, the two found unlikely common ground in the battle against the Islamic State. The US-led military coalition helped train Kurdish fighters on the ground and conducted airstrikes against Islamic State positions in Iraq and Syria. Iran, too, was deeply involved in the fight against Islamic State. Iran's participation in the fight against ISIS largely stemmed from the country's desire to have more influence in the Middle East," the report states, adding that the conflict also entails the longstanding enmity between the Shiite and Sunni sects of Islam.

"This sectarian conflict has been linked to many crises in the Middle East over the years, particularly because Iran has adopted a policy of supporting Shiite militias and governments through a vast network of proxies, putting it at odds with Sunni powers like Saudi Arabia," Business Insider notes.

Beyond that, the chaos created in the region by Trump's ordering the assassination of Suleimani has created an opening for ISIS to ramp up recruiting and terrorism in Iraq, according to some experts.

"Experts have warned that the conflict playing out between the US and Iran will only fuel further instability in Iraq, which is slowly recovering from the devastation brought on by the emergence of ISIS within its borders," the report states.

"Iraq has been a theatre for US-Iranian competition, influence, and power projection for some time," explained Lydia Khalil, a research fellow at the Lowy Institute in Sydney. "Iraq will remain and increase as a battlefield between US and Iran after this event, which will complicate Iraq's stabilization and governance."

"They are looking to survive and carve out areas of influence within Iraq if possible," he explained, adding that he only sees growth in Iraq and not other countries like Afghanistan where ISIS also has a presence.

"Iraq is their heartland," Shanahan remarked. "Any diminution in coalition or Iraqi military actions will give them greater freedom of action."