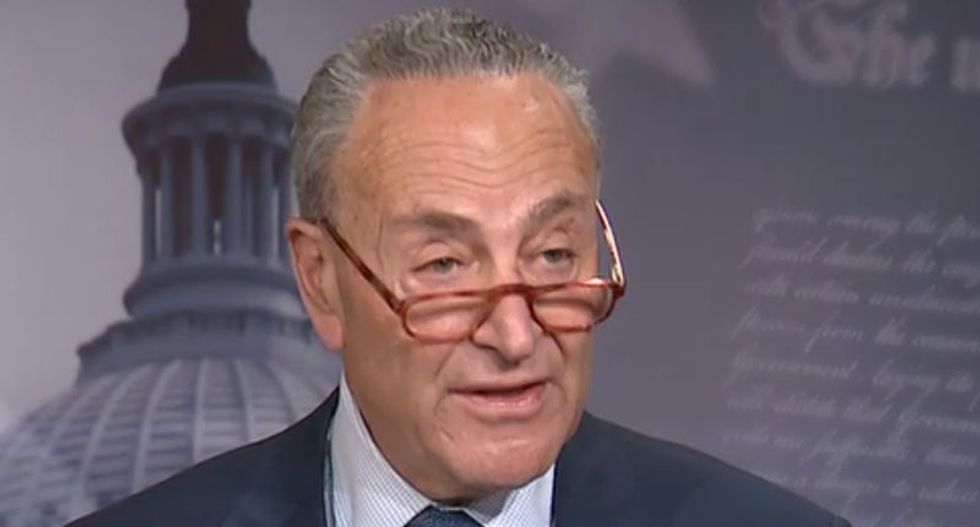 US President Donald Trump's historic impeachment trial begins in earnest Tuesday in the Senate, with Democrats calling for his removal from office and Republicans determined to acquit him -- and quickly, if possible.

Four months after the Ukraine scandal exploded, and 10 months before Americans go to the polls to decide whether to re-elect Trump, the 100 members of the Senate will gather at 1:00 pm (1800 GMT) with Supreme Court Chief Justice John Roberts presiding over the trial.

The lawmakers, sworn in last week as jurors, will decide if Trump abused his office and obstructed Congress as charged in the two articles of impeachment approved last month by the lower chamber House of Representatives.

The articles state that Trump tried to pressure Ukraine into interfering in the 2020 election to help him win, and then he tried to thwart a congressional probe of his behavior.

It will be only the third time a president has endured an impeachment trial, after Andrew Johnson in 1868 and Bill Clinton in 1999.

Part of the scandal centers on a July 25 telephone call in which Trump pushed Ukrainian President Volodymyr Zelensky to announce an investigation of former Vice President Joe Biden, Trump's potential opponent in the November vote.

Democrats, who control the House of Representatives, accuse Trump of manipulating Ukraine by withholding $400 million in military aid for its war against Russian-backed separatists -- and a White House meeting -- on condition a probe was opened into Biden.

Trump, 73, was absent from Washington on Tuesday, attending the World Economic Forum in Davos, Switzerland, where he again branded impeachment proceedings against him as a "hoax."

"It's the witch hunt that's been going on for years and frankly it's disgraceful," he said.

Trump's 12-man legal team is contesting the very idea of his impeachment.

They called the two articles of impeachment -- approved largely along party lines in the Democratic-controlled House -- the product of "a rigged process" and "constitutionally deficient" because they involved no violation of established law.

Trump's lawyers, including Kenneth Starr, who tried to bring down Clinton over his affair with Monica Lewinsky, said in their brief that "the Senate should reject the Articles of Impeachment and acquit the president immediately."

But House managers said Saturday in a memorandum that Trump "abused the power of his office to solicit foreign interference in our elections for his own personal political gain, thereby jeopardizing our national security, the integrity of our elections, and our democracy."

They said the president's behavior "is the Framers' worst nightmare," referring to the authors of the US Constitution, and that Trump deserved to be removed from office.

But Trump looks almost certain to be acquitted because of the 53-47 Republican majority in the Senate.

How long the trial will last is up in the air.

The first order of business Tuesday will be to set the rules, such as how long to hear the arguments of the House managers, or prosecutors; how long to hear the defense; the time allotted for questions, submitted by the senators but read by Roberts; and whether they will call witnesses or seek other evidence.

Senate Majority Leader Mitch McConnell late Monday proposed rules calling for each side to have 24 hours over two days to present their arguments.

That makes for long trial days stretching late into the night but is a significantly quicker pace than in Bill Clinton's impeachment trial in 1999. The chamber will debate and vote on the proposed rules Tuesday.

Senate Democratic leader Chuck Schumer said McConnell was rushing the trial and making it harder for witnesses and documents to be presented.

"On something as important as impeachment, Senator McConnell's resolution is nothing short of a national disgrace," Schumer said in a statement.

The Democrats want key Trump administration officials to testify, such as acting chief of staff Mick Mulvaney and former national security adviser John Bolton, in the belief that they know significant facts about Trump's dealings with Ukraine. Bolton has said he is willing to testify if subpoenaed.

The White House has said it expects the trial to be over in two weeks. Clinton's trial lasted five weeks.

McConnell has said he won't consider the witness issue until after the arguments and questioning take place, and his majority means he will likely prevail.