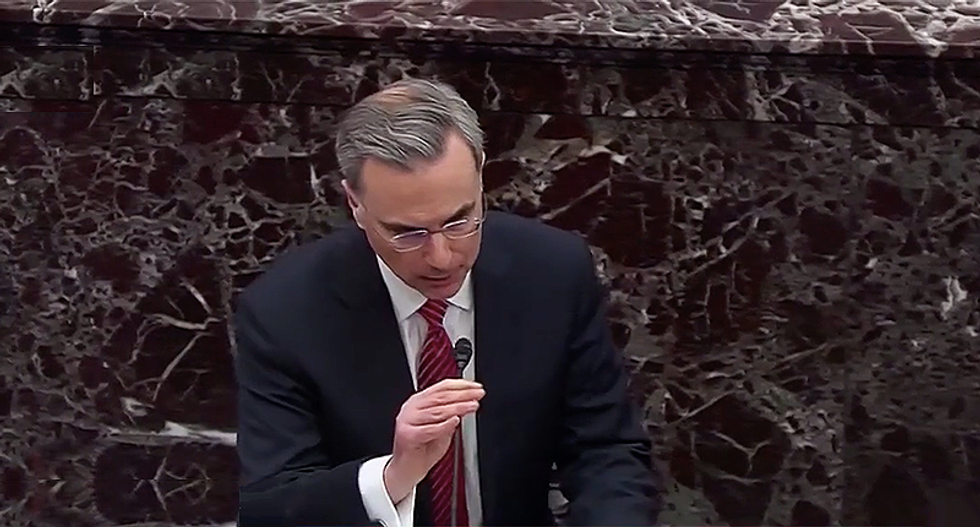 President Donald Trump woke up and began tweeting around midnight EST during the Senate impeachment trial over the amendments over the rules. That's when a noticeable thing changed on the Senate floor: Trump's team started yelling.

Nearing 1 a.m. EST Tuesday morning while the president was tweeting about impeachment, his team began attacking Rep. Jerry Nadler (D-NY) personally. They called him a liar and accused him of attacking the president and demanded an apology. After nearly 12 hours this was the first time the White House got even remotely animated after a dull defense of the president.

It wasn't lost on those watching the late-night proceedings. You can see the comments below:

Pat Cipollone unloads on Nadler: “The only one who should be embarrassed is you, Mr. Nadler, for the way you addres… https://t.co/VLeQJMLPCv
— John Bresnahan (@John Bresnahan) 1579671553.0

The most compelling debate of the day didn’t come until the witching hour. Animated oral punching from Nadler over… https://t.co/hXt4n0zn3Y
— Chad Pergram (@Chad Pergram) 1579671925.0

Good lord. A hundred forty years ago when you were a prosecutor, at trial you too said the defendant was guilty. Re… https://t.co/lJ34uYkNXr
— Preet Bharara (@Preet Bharara) 1579672063.0

#RepNadler is reminding that #Cippolone sent a letter rejecting the offer of due process & then claiming no due process. #ImpeachmentTrial
— Maya Wiley (@Maya Wiley) 1579671990.0

And now everybody is looking up the meaning of the word Roberts referenced -- pettifogging -- which Merriam Webster… https://t.co/0NNPJazqLO
— Athena Jones (@Athena Jones) 1579672876.0