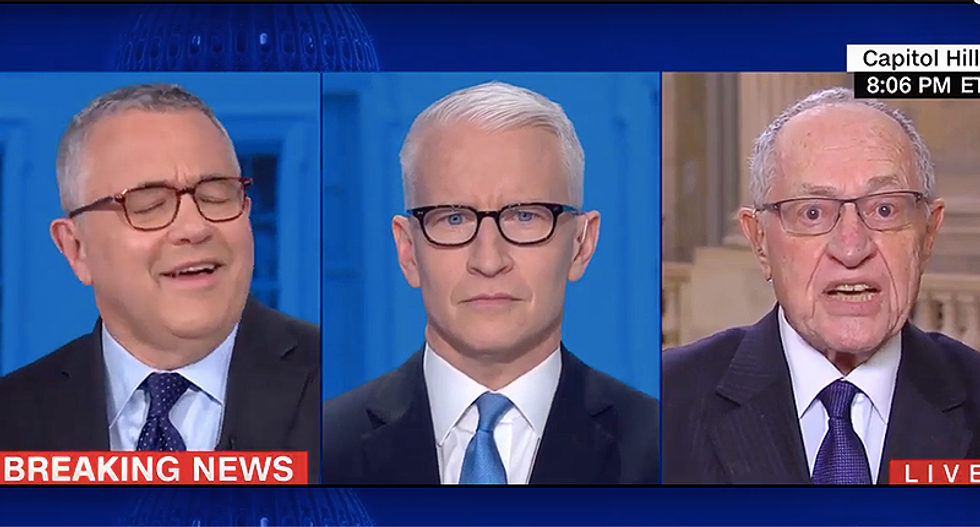 "I mean, Alan, you are equating maladministration with the abuse of power," said Toobin. "You are the only scholar who does that."

"Again, you're wrong," said Dershowitz. "Let me give you a cite. Today's New York Times," Professor Nicholas Bowie says that almost exactly. He says that maladministration, abuse of office, abuse of power — read it in The New York Times."

"That's right. And that's why it makes his argument so much stronger," said Dershowitz. "He thinks I'm wrong and yet he agrees with me that maladministration, abuse of power and abuse of office are essentially the same. I'm not quoting him for his conclusion. You can quote him from his conclusion. I'm quoting him for the point that you just made saying no scholars think abuse of power is the same as maladministration."

"The best you can do is quote a scholar who thinks you're wrong?" said Toobin.

"Jeff, why is abuse of power an impeachable offense?" asked Cooper.

"Because impeachment is about what the president can do wrong," said Toobin. "It is about abuse of the office of president. This is the difference between the Clinton impeachment and this impeachment. Anybody can lie about sex in the grand jury. Only a president can withhold aid from a congressionally authorized taxpayer money in return for dirt for his political enemies. That abuse of presidential power is exactly what Alexander Hamilton was talking about in Federalist No. 65. It is why there is an enormous consensus that abuse of power is an impeachable offense that only you and the president's lawyers think is not an impeachable offense."

"Let me make a categorical statement," said Dershowitz. "If Hillary Clinton were under impeachment for abuse of power, virtually all the scholars that say abuse of power is an impeachable offense would be on the other side. They do not pass the shoe on the other foot test."

"How do you know?" said Toobin incredulously. "You know every law professor?"

"I don't think we get to that issue, whether he abused his power," said Dershowitz. "Did George Washington abuse his power?"