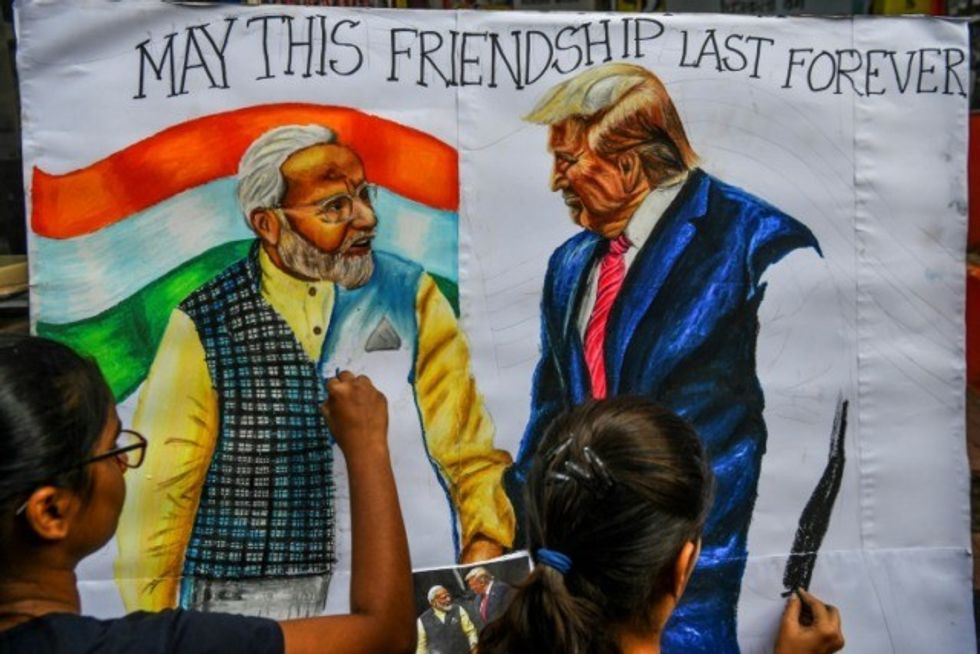 President Donald Trump kicked off his first official visit to India by addressing a rally of more than 100,000 people on Feb. 24 in Indian Prime Minister Narendra Modi’s home state of Gujarat.

Trump promised the thousands of cheering Indians who greeted him “an incredible trade deal” and “the most feared military equipment on the planet.”

Accompanied by first lady Melania Trump, he then toured Sabarmati ashram, where Mahatma Gandhi lived for 13 years. Afterwards, Trump visited the Taj Mahal, a 17th-century mausoleum built by an Indian emperor for his beloved wife.

Trump and Modi have built a personal rapport. The U.S. president’s 36-hour visit to India – named “Namaste Trump” – is seen as India returning the favor for “Howdy Modi” – a rally in Texas in fall 2019, where the two leaders appeared together.

A few news reports had suggested that Modi and Trump could discuss rising violence and discrimination against religious minorities in India. However, media reports noted that President Trump later defended Prime Minister Modi on religious freedom in India, even as riots broke out in New Delhi, leaving at least 10 people dead.

I am a scholar who studies U.S. foreign policy toward India. In the past, U.S. administrations concerned with boosting trade with India have celebrated the two countries’ shared commitment to democracy and human rights. Under the Trump administration, I argue, the relationship is in danger of becoming purely transactional.

Departing from the past

Over the past several decades, American presidents, regardless of political affiliation, have reaffirmed the shared values that have bound the two states.

Despite the ebbs and flows in the India-U.S. relationship, both sides have long seen democracy as an important link.

In 1977, President Jimmy Carter visited India shortly after Prime Minister Indira Gandhi lost an election. Gandhi had declared a state of emergency in India, ruthlessly curtailing civil rights and personal liberties. Carter opposed providing U.S. nuclear fuel to India because India had conducted a nuclear test in 1974, arguing that it had violated the spirit of a prior agreement.

Nevertheless Carter went out of his way to laud India for its ability to restore democratic practices, following the state of emergency. Several decades later, a president of a wholly different ideological leaning, George W. Bush, adopted a markedly similar stance when hosting Prime Minister Manmohan Singh for a state visit in Washington.

When introducing his visitor to his wife Laura Bush, the U.S. president famously celebrated the absence of religious extremism in India, calling it “a democracy which does not have a single al-Qaeda member in a population of 150 million Muslims.” 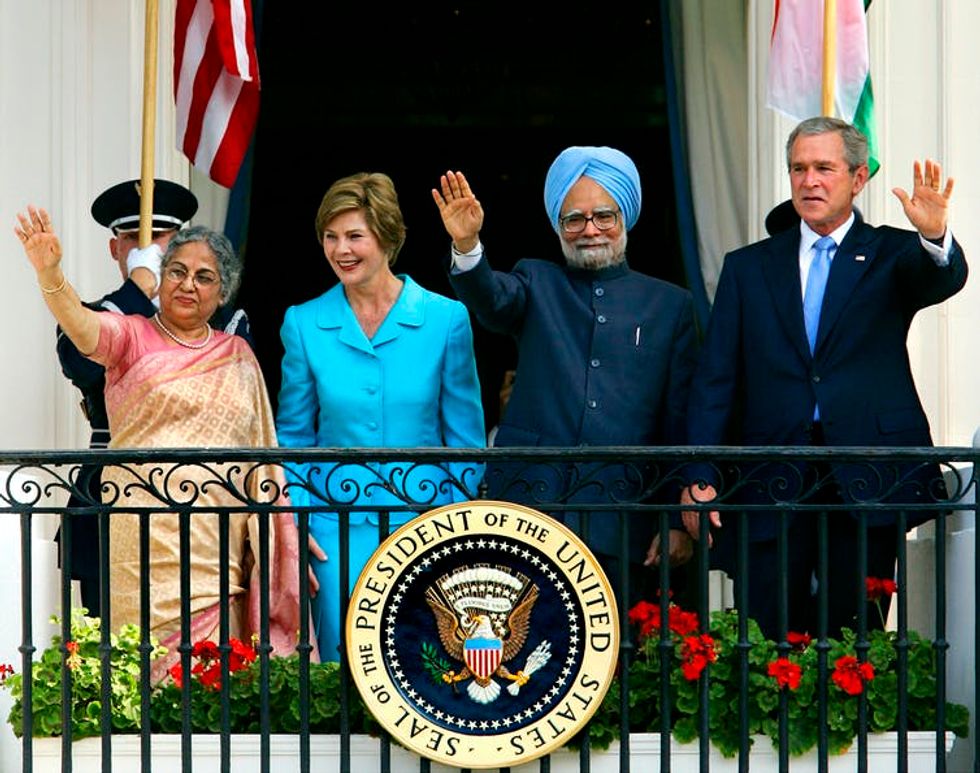 Bush went on to attribute the absence of Islamic extremism in India to its commitment to democracy.

By the time of the first George W. Bush administration, the Indo-U.S. bilateral relationship had opened up a significant market for American goods.

A big reason for this growing trade relationship was a shift in India’s U.S. foreign policy. Even as trade grew, the U.S. presidents have not shied away from criticizing India.

“Every person has the right to practice his religion or not to practice it if they choose so without persecution,” Obama stated in a speech in Mumbai shortly before his departure from India on Jan. 27, 2015. 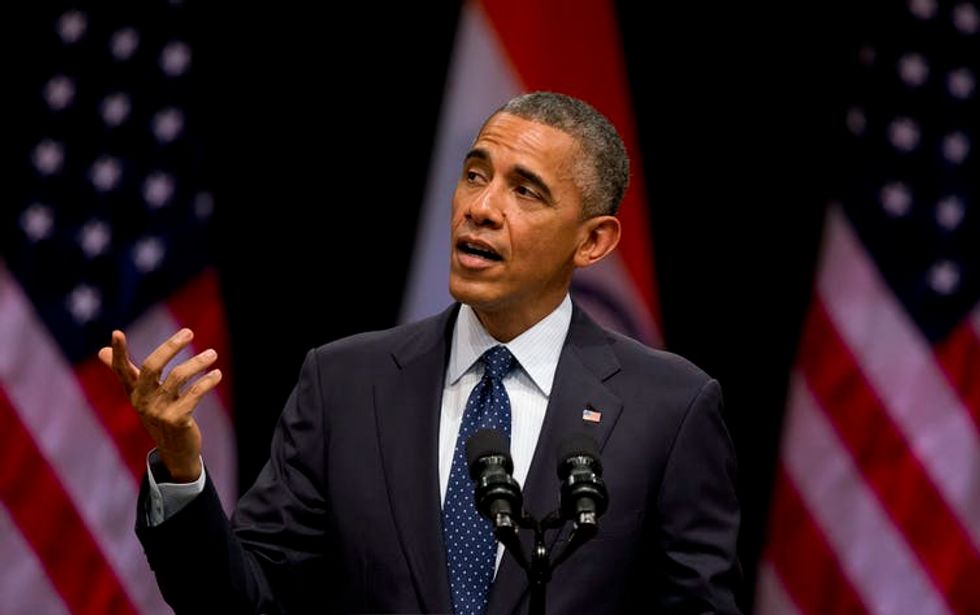 President Barack Obama during his second visit to India in 2015.

Trump’s visit diverges from this past of U.S. presidents alternately celebrating and critiquing democracy in India. Trump seems to be focused on material issues – primarily India’s increasing spending on U.S. military supplies.

In recent years, defense and military sales relationship with India have been burgeoning, growing some 557% between 2013 and 2017 over the previous five-year period and now reaching almost US$20 billion. In early February of this year India announced it would purchase $2.4 billion in Sikorsky naval helicopters from the U.S.

These military acquisitions, in considerable part, stem from India’s growing apprehensions about China. These fears stem from China’s military capabilities arrayed along much of India’s Himalayan border and the failure to resolve a border dispute.

Indeed Trump has adopted a hard line stance toward India when it comes to business transactions. On the eve of his departure to New Delhi, Trump ended India’s preferential trade status as a developing country. The move could impose as much as $260 million in new duties and is meant to induce India to open up its markets to a range of American manufactured and agricultural products.

A requiem for human rights?

Missing from Trump’s visit is any allusion whatsoever to recent disturbing political developments in India.

In early August 2019, India ended the special status of the portion of the state of Kashmir, under India’s control. It also placed a number of prominent politicians under house arrest, blocked telephone and internet services and dramatically bolstered its military presence in the region.

In December 2019, India passed the Citizenship Amendment Act, a law that allows the immigration of a range of minorities to India from Afghanistan, Bangladesh and Pakistan but bars Muslim migrants. Protests that erupted across the country in opposition to the new law have been brutally repressed by police. 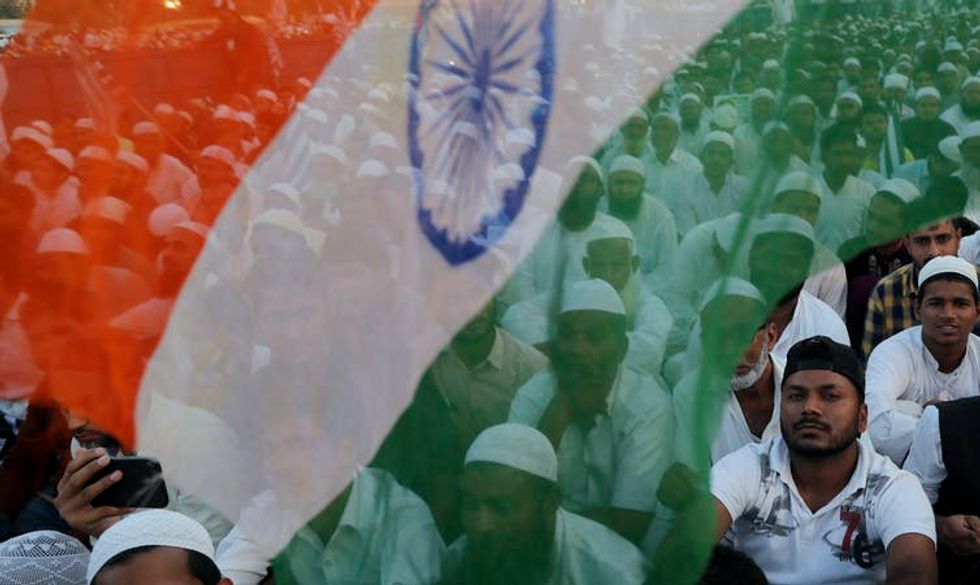 Indian Muslims participate in a protest against a new citizenship law.

India is also drafting a National Register of Citizens, an effort to document all voting-age Indians that could in effect disenfranchise millions of poor minorities because of their inability to produce appropriate papers.

All of these policy initiatives have been undertaken since Prime Minister Modi was re-elected in April 2019. Several members of U.S. Congress, most notably U.S. Rep. Pramila Jayapal of Seattle, have been outspoken about India’s human rights challenges. But Trump has stayed silent – and he seems unlikely to break that silence on his first-ever official visit to India.

As I see it, Trump’s message is clear: As long as India opens up its markets to American products, and is willing to make common cause with the United States on some foreign policy issues, the shared commitment to democratic values and civil rights of minorities can be set aside.