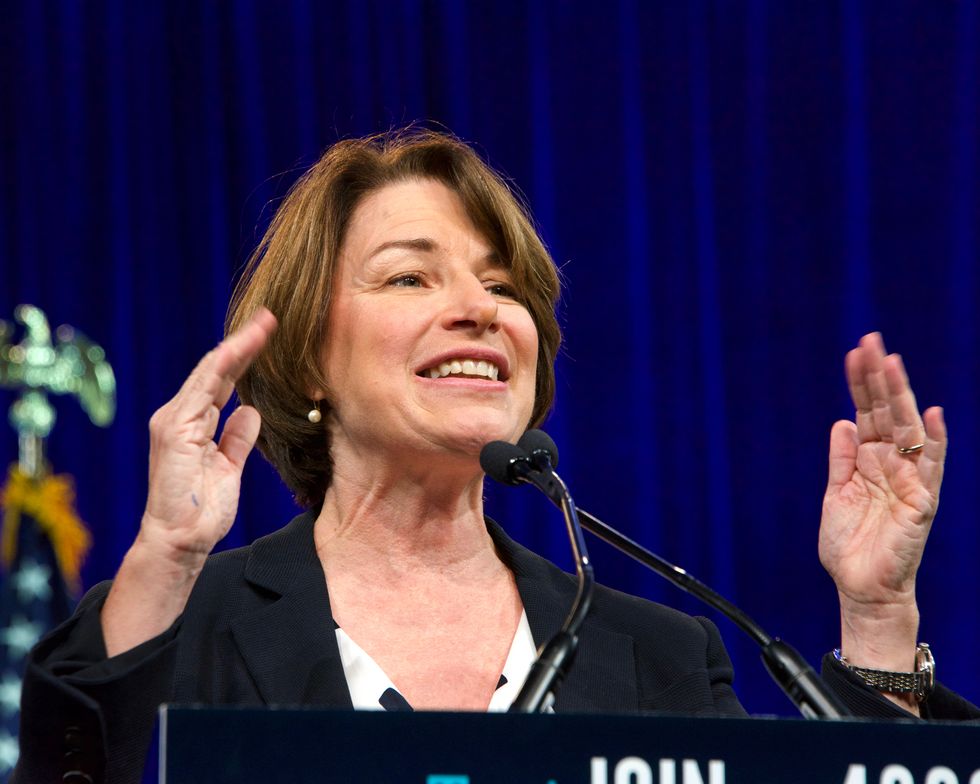 Of course some Democrat took the bait from the Dems-for-Life types, because of course they did, and of course it was Amy Klobuchar, because... of course:

Democratic presidential hopeful Sen. Amy Klobuchar (D-Minn.) on Tuesday said that the Democratic Party should be a "big tent" for people of different beliefs, including those who oppose abortion rights.

Klobuchar, who is running as a centrist candidate and alternative to Sens. Bernie Sanders (I-Vt.) and Elizabeth Warren (D-Mass.), said while she is "pro-choice"...she doesn't think the party should shut out Democrats who disagree.

"There are pro-life Democrats, and they are part of our party, and I think we need to build a big tent," she said.

"I think we need to bring people in instead of shutting them out."

This is the potato-salad-left-unrefrigerated-for-hours kind of politics. There is simply no reason to do this, except to play the part of the camel standing outside the tent looking in, if you catch my drift. It's smarmy, for one thing. What Dem politician is going to say No, thanks. I'm good. We don't need those pro-life votes?

But there's Klobuchar, making sure everyone knows she's an "alternative" to Pete Buttigieg and especially Bernie, who according to the National Review wants to run all those baby-savers out of the party:

Which sounds bad until you go back and hear the context, which is that a populist movement that doesn't stand for the rights of its vulnerable members (in this case the LGBT community and women) can't hope to overturn an entrenched political system holding everyone down.

But of course, Amy Klobuchar appears to be interested in being elected, and that's pretty much it. (Quick, name one policy she's championed while in the Senate.) But Klobuchar will win her election, by God, and if that means giving ammunition to the right wing trolls over at the National Review, well, so be it.

And even this swift embrace from the right produces soul-numbing contradictions: the NRO accuses Sanders of hypocrisy for supporting a pro-life mayoral candidate in 2017, but saying in 2020 that he thought being pro-choice was part and parcel of being a Democrat. Except the endorsement is evidence for exactly the opposite conclusion. If Sanders really thought the pro-life vote should be chased out of the party, why would he have supported Heath Mello? He certainly took enough heat for the endorsement that it couldn't have been for political expediency.

I recently asked the head of Democrats for Life of America what made her cause deserve to be accorded special deference in the party, and received no reply. I'd like to ask Klobuchar the same thing. If Dems need a big tent for pro-lifers, why not one for those who want to send LGBTQ people to "reparative therapy"? For those in favor of child labor? Of course she wouldn't. No candidate would. It simply points to the fatuousness of the "big tent" construction.

As I have said to the wind many times, Democrats have the right to define themselves as they please, and as a body, they have done that on countless issues, including on the question of reproductive rights. But why should dissenters on this one particular cause get a lollipop? The answer, of course, is usually because a male politician wants to play "Good Daddy." It's more than a little disheartening to see a woman who ought to know better running the same play.

I digress. I noted recently that catering to the pro-life vote would be a net loser for Democrats, which is true. But the math turns out to be even worse than before. The Hill, citing a Kaiser Family Foundation study, says that 84% of Democrats consider themselves pro-choice, and only 15% say they're "pro-life." If this study is correct and 20% of the pro-lifers would not vote for a pro-choice candidate, that sloughs off about 3% of the total voters. But 25% of pro-choicers say they wouldn't vote for someone opposed to reproductive rights. That's more than 1 in 5 Democrats. This here big tent is pretty darned lopsided, don't you think?

In the end, the whole subject is bollocks. There are plenty of pro-life Democrats, voters and elected officials alike. Nobody is going to chase them out, the complaints of a dogmatic few aside. All that's going on here is that Klobuchar's trying to muscle Biden and Buttigieg out of the way from the right by tossing a bone to a few people who can't seem to wrap their head around the idea that the party has moved overwhelmingly in a different direction than they one they prefer. If only it were that harmless.

Klobuchar's lazy dig at her rivals feeds the trolls, yes, but it also boosts the "Democrats in disarray" narrative at a time when they desperately need to stick together. It makes it harder to have any kind of productive conversation about reproductive rights within the party, and it encourages the zealots and the cynical to deal away women's needs. In short, it does exactly what Sanders said it would: it divides the progressive movement so Amy Klobuchar can find just the tiniest improvement in where she stands on Joe Biden's neck.

In the end, this big tent rhetoric accomplishes nothing, except perhaps to make more voters sympathize with Pete Buttigieg and Bernie Sanders. So congratulations, Senator, I guess?