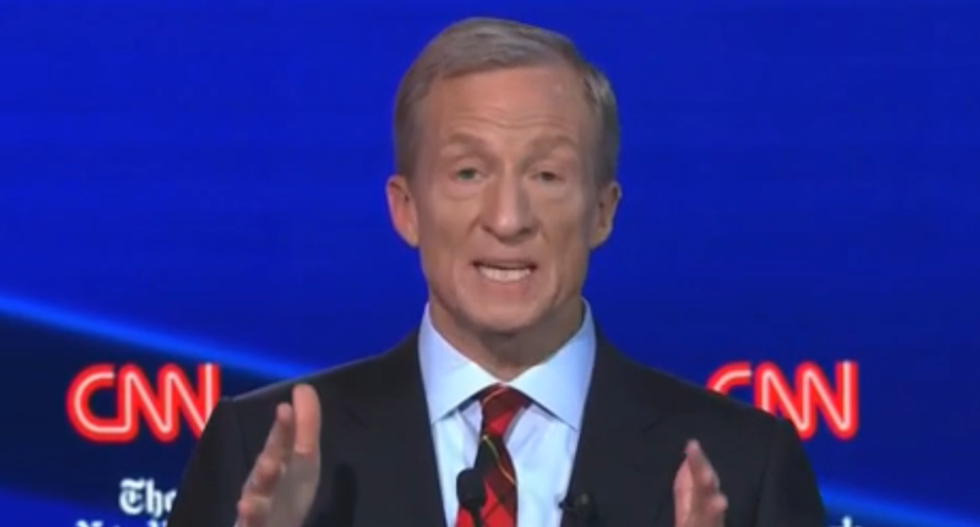 For centuries, South Carolina's Charleston was the largest port of entry for the transatlantic slave trade. Now, a billionaire activist named Tom Steyer is shaking up the state's Democratic primary by advocating slavery reparations for African Americans.

A California financier turned philanthropist and environmental campaigner, Steyer has poured tens of millions of dollars into the state ahead of Saturday's vote -- with a single-minded focus on the black voters who make up 60 percent of its Democratic electorate.

How South Carolina's African Americans vote in the White House primaries is traditionally a key indicator of which contender has nationwide support from the black community -- a crucial Democratic constituency.

Flooding the airwaves with promises to compensate the descendants of slaves, and to invest in universities in historically marginalized black communities, Steyer -- who lags far behind his Democratic rivals nationally -- has hoisted himself into third place in state polls, behind Joe Biden and Bernie Sanders.

"You've got to tell the truth about what happened," said Steyer during one of his final campaign stops at a Mexican restaurant in Myrtle Beach, drawing applause from the diverse crowd.

"You've got to repair what's done so that we can move on together," said Steyer -- who says the United States needs to confront a "subtext of race" underpinning nearly every issue it faces, more than 150 years after the abolition of slavery in 1865.

Teresa Skinner, an African-American retired nurse and veteran, was impressed.

"Tom Steyer's bringing something new," said the 51-year-old. "It's just an enlightening thing."

"He's just coming in as an individual that's wanting to make us better than what we are, and right now we're in a divided nation."

Robert Greene, a visiting professor at Claflin University, a historically black college in South Carolina, attributes Steyer's popularity squarely to his "very aggressive stance" on reparations, "an issue that most of the other candidates will not touch."

The idea of reparations has been the topic of contentious debate in the United States for decades, but has picked up steam in recent years.

Last April, students at Georgetown University in Washington voted to create a fund to compensate the descendants of 272 people enslaved at the Jesuit-run school who in 1838 were sold to finance its operations.

In the past two years, at least two other US institutions have set up funds intended to address their past links with slavery.

In a video released this week, Steyer's campaign stated its case in uncompromising terms.

"For 400 years, this country has built a racist system of profits made on the backs of incarcerated black bodies," a narrator says. "Reparations are well overdue."

Retiree Ama Saran -- who intends to vote for Biden -- recognizes the potential of Steyer's proposal, but has doubts over what it would mean in practice.

"I think that it is important. I think it needs to be looked at," said Saran, who is African American.

"But we would have to plan that thing because there's a lot of division among the people who would be afforded reparations. There is not that much agreement about what that means."

Other Democratic candidates have agreed to convene a commission to study reparations if they win, but only Steyer has made the issue a cornerstone of his campaign.

President Donald Trump aimed an election-eve jab at Steyer, branding him a "loser" and a "joke."

But as Steyer pumps money into South Carolina, he has faced bitter criticism from Democratic rivals too, who accuse both him and fellow billionaire Michael Bloomberg of using virtually unlimited resources to buy the election.

"What's happening is you have Steyer spending hundreds of millions," Biden complained last weekend, when asked why his lead in the state had narrowed.

Biden is banking heavily on the black vote in South Carolina and beyond, hoping to leverage his popularity as Barack Obama's former vice president in a race that no longer features any African American candidates.

Steyer's actual ad expenditure in South Carolina stood at $23.6 million as of February 27, according to the Advertising Analytics monitor -- almost 10 times the second spender, the centrist Pete Buttigieg.

Steyer denies his growing support comes down to money: his campaign makes the case that as a newcomer to politics he had to invest to make himself known to the public.

"When you say that he's buying an election, you're actually insulting the voters," Steyer's spokesman Alberto Lammers told AFP at the campaign's headquarters in Charleston.

"What is resonating is his message, and people are responding to that."