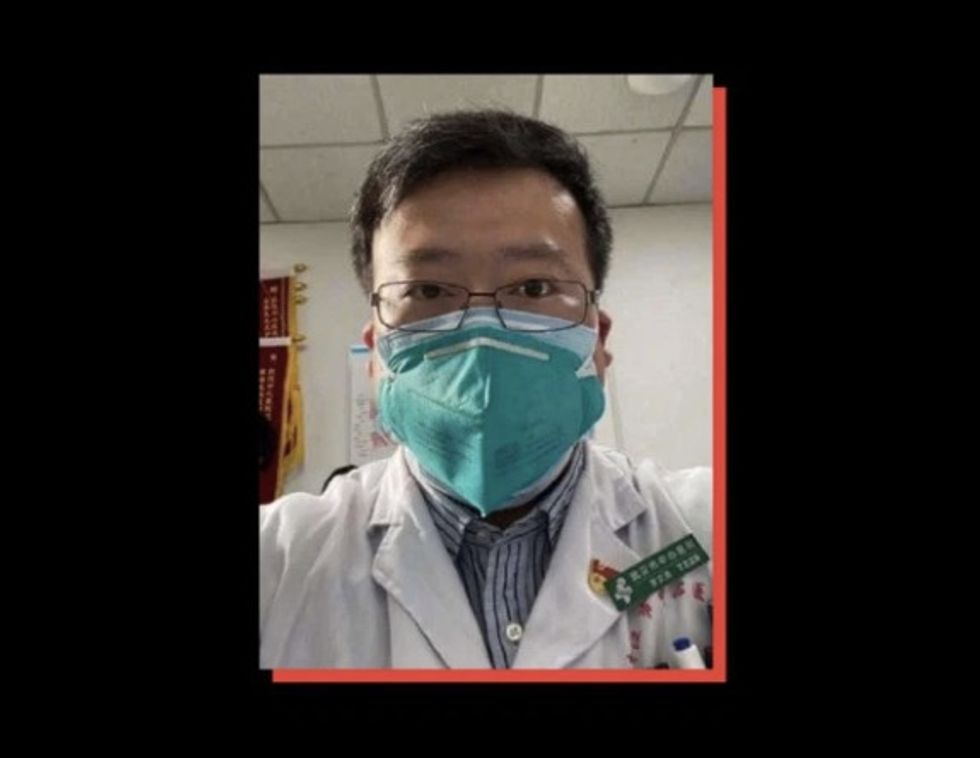 A Chinese doctor, among the first to raise the alert about China's new coronavirus, himself died from the pathogen on Friday, emphasizing the depth of a worsening crisis that has killed more than 560 people.

Ophthalmologist Li Wenliang died at 2:58 am, Wuhan Central Hospital said in a post on its verified account on Chinese social media platform Weibo.

The 34-year-old sent out a message about the new coronavirus to colleagues on December 30, but was later among eight whistleblowers summoned by police for "rumour-mongering."

He later contracted the disease while treating a patient and has been hailed as a hero by Chinese internet users.

Li was among more than 28,000 people who have been infected in China, where authorities are struggling to contain the outbreak, despite ordering millions indoors in a growing number of cities.

Two dozen countries have confirmed cases of the respiratory disease, which emerged from a market selling exotic animals in the central Chinese city of Wuhan late last year.

Thousands of holidaymakers on cruise ships in Hong Kong and Japan face an agonising wait to find out if more among them have been infected.

At least 20 people on the Diamond Princess -- off Yokohama since Monday -- have tested positive. Some 3,700 passengers and crew from more than 50 countries have been confined to quarters.

Japanese Prime Minister Shinzo Abe said another cruise ship, the Westerdam, was heading to the country with one confirmed case.

He said no foreigners from the vessel, capable of carrying nearly 3,000 passengers and crew, would be allowed to disembark.

Hong Kong has been particularly nervous because the crisis revived memories of another coronavirus that causes Severe Acute Respiratory Syndrome (SARS). It killed nearly 300 people in the city and another 349 on the Chinese mainland in 2002-2003.

One person has died after contracting the virus in Hong Kong.

While the death toll rises in China with the death of Li and others, experts have stressed that at two percent mortality, 2019-nCoV is far less deadly than SARS, which killed around 10 percent of the people it infected 17 years ago.

The outbreak has nevertheless been declared a global health emergency, prompting several governments to warn against travel to China and ban arrivals from the country, while airlines have halted flights and brought home their citizens.

Almost 200 Canadians showed up at the airport in Wuhan for the country's first evacuations, most on a commercial airliner chartered by Ottawa, officials said.

Germany's foreign ministry said it was working to bring home several nationals who had not made it out on a flight that reached Frankfurt last Saturday.

Saudi Arabia banned citizens and resident foreigners from travelling to China, while Air France-KLM extended its flight suspension by another month until March 15.

After Britain advised nationals to leave China, Beijing's ambassador to London said there should not be "such a panic."

China has enacted unprecedented measures to contain the virus, which spread during the Lunar New Year holiday in late January, when millions criss-crossed the country.

But deaths and new infections continue to rise, especially at the epicentre in Hubei province, where 18 cities housing 56 million people have been under virtual lockdown since late last month.

There is a shortage of 2,250 medical personnel in Hubei, deputy provincial governor Yang Yunyan said Thursday. The inability to offer health workers adequate protective gear is hindering the numbers that can be deployed on the front lines, he added.

With Hubei's capital Wuhan overwhelmed, authorities were due to open a second, 1,600-bed field hospital.

The first, with 1,000 beds, opened earlier this week, and authorities said they were converting public buildings into temporary medical facilities.

The central government has announced measures intended to ensure the supply of vital resources, with tax breaks for manufacturers of medical equipment.

"We must make all-out efforts across the country to meet the need for essential medical supplies and medical professionals in Hubei province," Premier Li Keqiang said, according to Xinhua.

BGI Group, a genome sequencing company in southern China, said it had opened a lab in Wuhan able to test 10,000 people a day.

They include Hangzhou, 175 kilometres (110 miles) from Shanghai, where fences block streets and loudspeakers tell people: "Don't go out!"

In Beijing -- where streets remain eerily quiet -- restaurants have been barred from accepting reservations for parties.

And in Nanchang, the capital of Jiangxi province which borders Hubei, pharmacists must send reports to the authorities on anyone buying fever or cough medicine.

Workers making iPhones at tech giant Foxconn's plant in Henan province, bordering Hubei, will be quarantined for up to two weeks, the company said.

China said it would halve tariffs on $75 billion worth of US imports, as part of a trade truce with Washington and as officials look to calm markets unnerved by the outbreak.