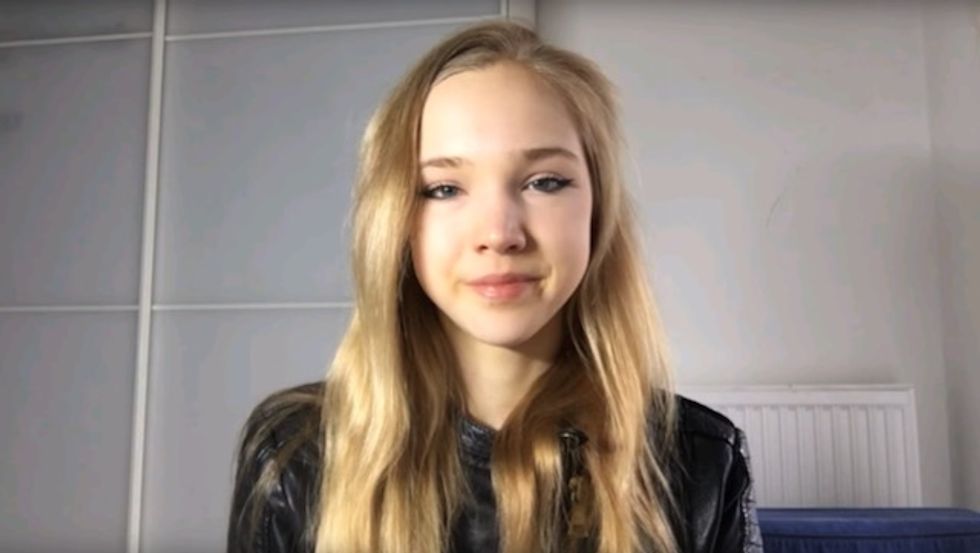 At 19, Naomi Seibt is on her way to becoming the voice of climate skeptics. Close to the far right in her home country of Germany, she has also been propelled by the Heartland Institute, an American think tank supported by allies of US President Donald Trump.

Climate skeptics have found their muse: Naomi Seibt, a German woman who denounces “climate alarmism” in videos she posts on her YouTube channel. In December, the Heartland Institute, an American think tank engaged against scientific consensus on climate change, gave Seibt top billing during its one-day forum on “climate reality”, which took place on the margins of COP 25, the UN Climate Change Conference in Madrid, Spain.

One month later, the institute featured Seibt in a video posted on its own YouTube channel, entitled “Naomi Seibt vs. Greta Thunberg: Whom Should We Trust?”

“Greta Thunberg took the world by storm with her doomsday climate predictions,” reads the video’s description. “Naomi Seibt, a rising star, advocates for proper scientific discourse over climate change. Who seems like the more reasonable advocate to you?”

‘I don’t want you to panic’

The media has cast Seibt as the “anti-Greta”, and it’s difficult to avoid the comparison. The activists are both eloquent and close in age: The Swedish Thunberg is 16, and Seibt is 19. Thunberg warns unceasingly of climate crisis, while Seibt warns against "climate change alarmism".

Without denying global warming, a trend which she thinks is overestimated, Seibt questions the impact of human activity on the phenomenon. In the Heartland video, she says that “climate change alarmism, at its very core, is a despicably anti-human ideology”.

She also hopes to reassure the young people who mobilize for the “Fridays for Future” protests initiated by Thunberg. “I would like that young people are not made to fear the future or to believe that the older generations are destroying the planet, that the animals are dying out or that nature is dying,” Seibt said.

Faced with Thunberg’s success, Seibt is inspired by its elements of language and communication. She has altered some of the Swedish activist’s now-famous phrases for her own purposes, transforming, for example, Thunberg’s “I want you to panic”, from the World Economic Forum in January 2019, to an oppositional “I don’t want you to panic. I want you to think.”

However, Seibt doesn’t like being compared to the author of her source material.

“The reason I don’t like the term ‘anti-Greta’ is that it suggests I am an indoctrinated puppet myself,” she told an interviewer.

Freedom of expression, the migrant crisis and the German far right

Seibt claims that, unlike Thunberg, she is not being indoctrinated. She places her fight under the virtuous flag of freedom of expression as against so-called group think, asserting her right to “express skepticism, based on science”.

The German activist says she started “being skeptical” in 2015. “But this had less to do with climate science than with the migrant crisis in Germany.” She claims to be critical of subjects that find consensus in “mainstream media”, such as immigration, feminism, gender theory, socialism, postmodernism and climate change. Issues that are “all linked in a sense and open the way to totalitarianism”.

German media call Seibt a sympathizer of Germany's far-right AfD (Alternative for Germany) party, the third-largest political force in Parliament. She insists she’s not part of AfD; however, her first video posted on YouTube is a poem on courage written for a competition that AfD launched in April 2019. Seibt also was applauded at an AfD meeting in Münster in early February.

Last November, Seibt participated in a conference of the European Institute for Climate and Energy (EIKE), a German think tank whose vice president, Michael Limburg, appeared on AfD’s list for the 2017 legislative elections. It was there that the Heartland Institute, which had hosted conferences with EIKE, first noticed her.

Interest from US climate sceptics

But why would an American think tank show so much interest in a teenage German activist? The Heartland Institute receives backing from influential Republicans, including William Happer, a scientist who served on the White House National Security Council between 2018 and 2019. Happer founded the CO2 Coalition, an organization to defend the “vital role of CO2 in our environment”, and is known for having compared the “demonization of CO2” to the “demonization of the poor Jews under Hitler”.

According to the Washington Post, the Heartland Institute fears that “Germany’s strong will to reduce its greenhouse gas emissions is contagious”. The Post reported that a Heartland director wrote that Seibt was the “star” of its Climate Reality Forum in Madrid, and a person who would be well-placed to fight German climate policy.

Suspected of being manipulated despite her intentions, Seibt has responded by adopting Thunberg’s cri de coeur at the UN Climate Action Summit in New York City last September. “How dare you?” Seibt asks in a video entitled “Message to the Media”. Time Magazine named Thunberg its 2019 Person of the Year, and her speech at the UN has millions of views on various YouTube channels; Seibt’s video, thus far, has less than 50,000. The comparison between the two activists ends there.

This article has been adapted from the original in French by Philippe Theise.