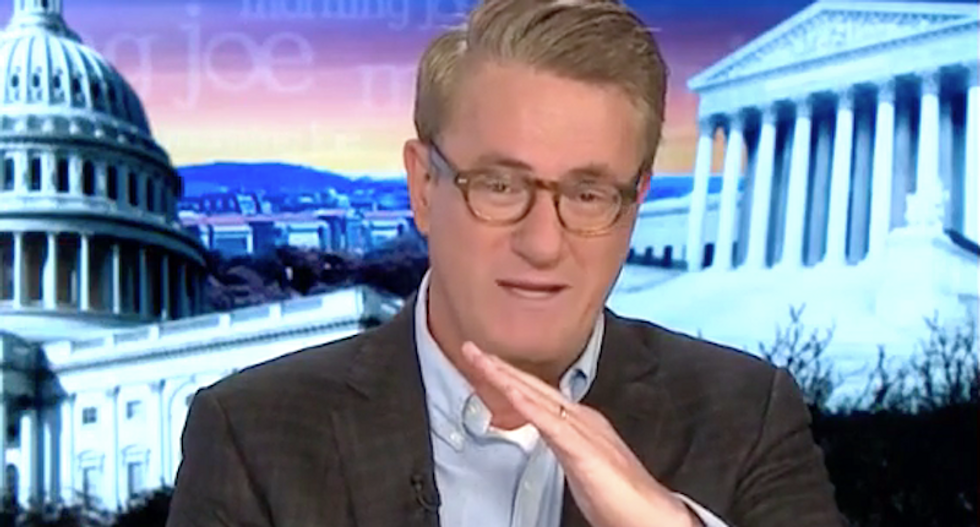 The president boasted that the U.S. economy was "the best it has ever been" and promised to protect health care coverage for Americans with pre-existing conditions, but the "Morning Joe" host said those lies were easily busted with a quick Google search.

"I wanted to do a little fact checking myself, and I put it through the 'Morning Joe' supercomputer -- the size of a city block, I tell you," Scarborough said. "The president saying that he's going to protect pre-existing conditions. My supercomputer, it spit back out the fact this is a damnable lie. Republicans have been feverishly working to kill the pre-existing conditions protection that would be afforded to people like my son with Type 1 diabetes."

"Two other things," he continued. "First, the economy is the best that it's ever been. This is particularly maddening not because the president saying it and lying about it, and not because Republicans in Congress are repeating that lie, but because the media -- and I've been complaining about this for a couple years now -- the media parrots the president."

Economic growth was higher under Jimmy Carter's presidency, even during the so-called "malaise" year in 1979 -- and Scarborough said the economy isn't working for most Americans.

"That is a Trump slump that is weak, that is anemic, and I know that everybody on Wall Street, they are all loving it," he said. "The rich are getting really, really rich, but 2.3 percent growth is pathetic. Under Kennedy it was 5.7 percent, under Johnson, 5.1 percent. Under Jimmy Carter, who Donald Trump has trashed before, 3.2 percent. Under Bill Clinton, 3.8 percent, and the Trump slump throughout the three years, the Trump slump puts it at 2.5 percent, and last year after all of those tax cuts for multi-national corporations and the very richest Americans in the land, the economy only grew last year by 2.3 percent."

"It's hard to sort through all the lies from last night," Scarborough continued. "I know a lot of people say, well, you have to admit it was a great -- great themes. Yes, great themes if you're cool with the person speaking lying all the time, but Donald Trump saying if we hadn't reversed the failed policies of the past administration, oh, we would never have this great economy. We are in the middle of an 11-year Obama economic recovery and all the lines are going like this, whether it's job growth, whether it's GDP -- it's ridiculous."