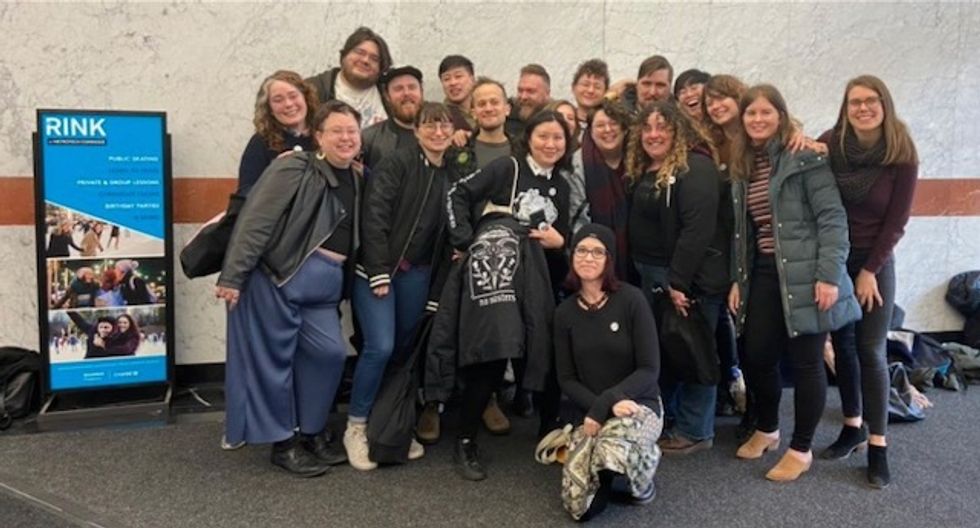 Workers at Kickstarter voting in favor of unionizing Tuesday, a major step forward for workers' rights in the technology industry. (Photo: @ksr_united/Twitter)

"To all tech and creative workers looking to fight for your rights, this is only just the beginning!"

Workers at the crowdfunding platform Kickstarter made history Tuesday when they voted to unionize, making them the first in the industry to do so in the latest grassroots victory for tech workers.

The 47-36 vote in favor of forming a union makes Kickstarter United the first union of white-collar, full-time workers in the tech sector, NBC News reported. Employees including designers, writers, engineers, and software developers, all voted in favor of forming the union.

"Utilizing our collective power to improve our workplace and our professional lives will increase Kickstarter's ability to have a radical, positive impact on society by allowing us all to advocate for workers' rights, which is a core pillar of the fight against inequality," Oriana Leckert, a spokesperson for Kickstarter United, told The Hill.

"Utilizing our collective power to improve our workplace and our professional lives will increase Kickstarter's ability to have a radical, positive impact on society by allowing us all to advocate for workers' rights, which is a core pillar of the fight against inequality,"

The National Labor Relations Board oversaw the vote after 18 months of negotiations between union organizers at Kickstarter and the company's management.

At least two organizers reported that they were fired during the dispute, and two others said they were forced out of their jobs by intimidation tactics from the management. In December, the two sides reached a neutrality agreement, with employees agreeing not to speak to the press about negotiations if the company stopped its campaign trying to dissuade workers from unionizing.

During the dispute, journalists who had used Kickstarter to fund their projects expressed their "unequivocal support" for the workers.

"It is impossible to partner with a company that does not respect its workers and is not willing to honor their rights," wrote the editorial staffs of Current Affairs, The Baffler, and other online publications. "Kickstarter's unlawful and unethical actions threaten to do significant damage to its platform, and to the creators who rely on it."

Following the long fight to form a union through the Office and Professional Employees International Union (OPEIU), Kickstarter workers plan to head to the negotiating table with management to discuss pay equity, diversity in hiring, platform moderation, and other issues.

"It's been a long journey, but now the real work is ahead of us!" tweeted the newly-formed union.

We are so truly grateful to everyone who has supported us along the way, especially @OPEIU & @153Local. It's been… https://t.co/0vaWZsPoDy
— Kickstarter United (@Kickstarter United)1582042036.0

"Workers want to be able to participate in critical product decisions without retaliation, to change how the company handles sexual harassment, how it addresses gender discrimination, and they want to take on future challenges with a healthy power structure," Clarissa Redwine, who says she was fired for organizing, told NBC News.

Labor leaders and supporters applauded the workers for their hard-won success.

The formation of Kickstarter United follows a swell in political activism among Silicon Valley workers. In 2018 Google employees pressured the company not to renew its government contract to develop artificial intelligence for new drone technology. Amazon workers last year demanded their companies do their part for climate justice by implementing plans to end carbon emissions.

"To all tech and creative workers looking to fight for your rights, this is only just the beginning!" tweeted the union.