‘I haven’t heard you speak like that’: MSNBC host shocked as independent senator blasts GOP’s embrace of authoritarianism 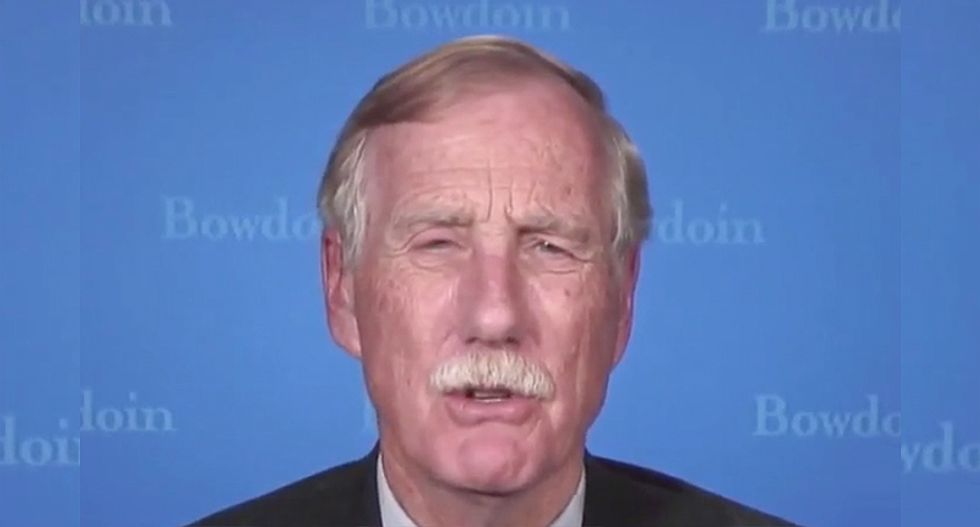 MSNBC host Ari Melber was floored by Sen. Angus King (I-ME) when the two spoke after the close of the impeachment trial in the Senate Monday.

After both sides did their closing statements, King said that he couldn't understand how Republicans are so ignorant to the reality of what they're doing.

The normally quiet and reserved senator unleashed on the president and the Republicans saying that they were allowing an outright authoritarian president more power.

"We are 200-plus year experiment and I think what's going on right now is a step toward authoritarianism," he said. "It is allowing an elected monarch and what the framers were worried about. That's why they put the impeachment clause in. People said you don't need it because you have elections. They said, no, you have to have a check on somebody. And particularly what makes it even more powerful in this case is the offense we're talking about involves meddling with the election. In other words, if the election itself is the cure but we can't trust that the incumbent won't, you know, finagle the election. It is not the cure."

Melber noted that King is known for his more moderate tendencies and his caution.

"So, to hear you say as this closing argument is completed on this day, that you are concerned that the actions in the Senate that the clearing, sort of acquitting of what I've quoted Sen. Lamar Alexander (R-TN) called the Democrats have proved their case, that the president was shaking down a foreign country, extorting help with his re-election, you're saying you believe that puts the United States on a path to being at risk of being an authoritarian country? Tell us more about that, because I haven't heard you speak like that before."

King said that that example combined with Article II of the impeachment, which he called a "kind of broad-scale total obstruction of the process."

"How do you hold a president accountable?" he asked. "How do you -- if a president can say, 'We're not going to share any information, any documents, any witnesses, and we're going to block all witnesses,' the impeachment clause is essentially a nullity. You can't convict somebody if they control the flow of the evidence. But also, I worry that it can be -- the principal is being established here that it's okay to do that. We'll go over into the ordinary oversight process."

He went on to say that this isn't really about Donald Trump, and the real thing at issue are future presidents having the power that the GOP gave with their precedent.

Watch his full interview below: