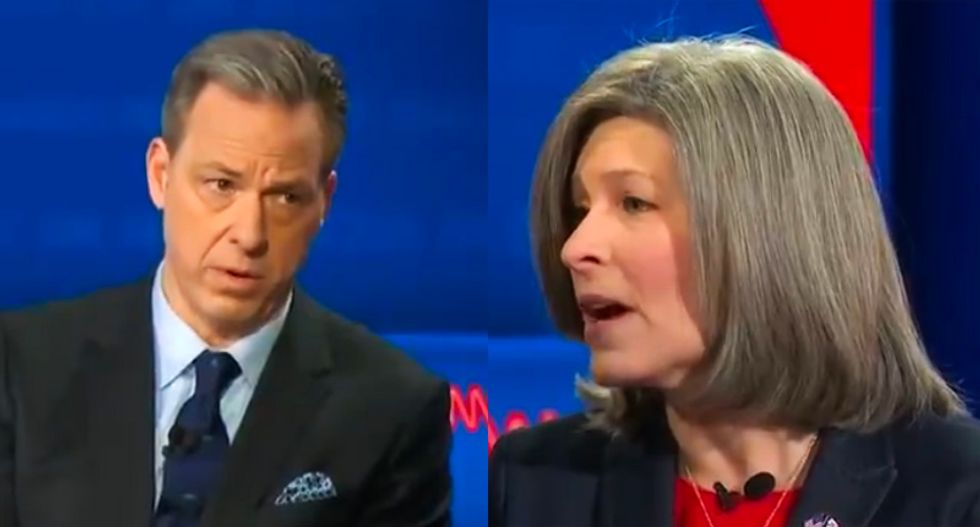 Sen. Joni Ernst (R-IA) was put on the spot on Sunday morning on CNN after calling Donald Trump's Ukraine phone call seeking dirty on former Vice President Joe Biden "wrong" and then refusing to explain why she thought it was wrong.

Appearing on State of the Union, the Iowa Republican who is faced with a tough re-election fight, tried to laugh off some of host Jake Tapper's questions as she avoided saying anything derogatory about the president.

Noting that some of her Republican colleagues in the Senate have called Trump's attempt to get campaign information "wrong" the host pressed Ernst for her opinion.

“We’ve seen the Democrats presenting the case, and I think it really did show that there was something of concern with Burisma. And so I think that the Democrats can follow that, they will make that decision as they are going to the caucuses tonight. But overall, there is a corruption issue in Ukraine, and we have pointed it out for years,” Ernst explained.

Pressed on the wrongness by the host, Ernst demurred only saying, "The president has a lot of latitude to do what he wants to do... generally speaking, going after corruption would be the right thing to do. He did it maybe in the wrong manner. But I think that he could have done it through different channels.”

"I think generally speaking, going after corruption is the right thing to do, but he did it in the wrong manner. Bu… https://t.co/HR5SPIIZkU
— CNN Politics (@CNN Politics)1580654792.0