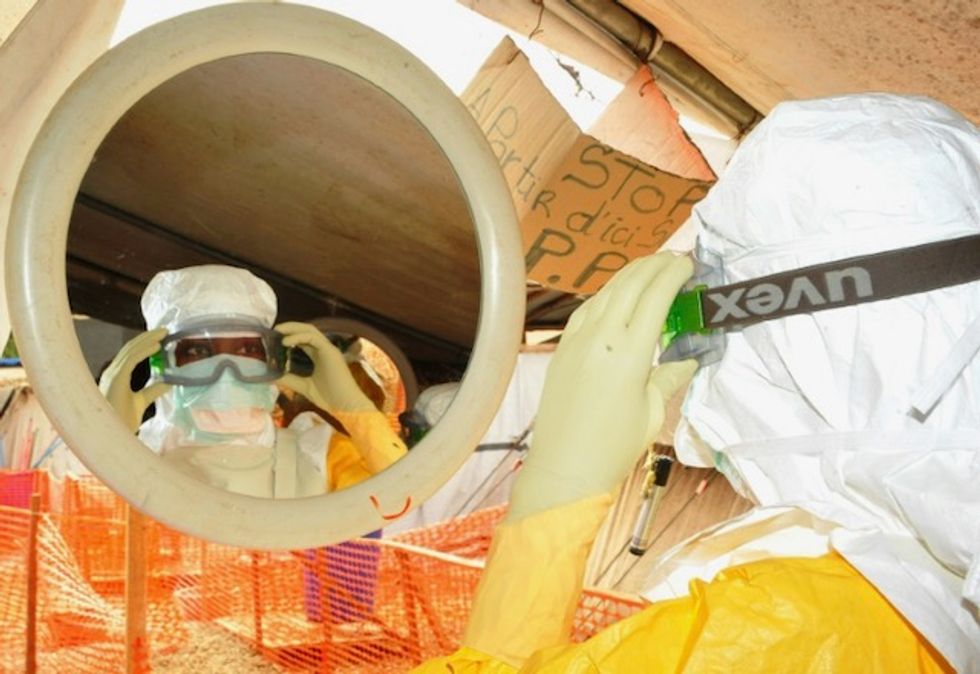 Before the emergence of the new coronavirus, which has sparked worldwide panic, other epidemics had struck earlier in the 21st century, but were less deadly than the previous century's pandemics.

The deadliest epidemic of the haemorrhagic fever Ebola broke out in West Africa in December 2013 and lasted more than two years, killing more than 11,300, mainly in Guinea, Liberia and Sierra Leone.

First identified in 1976, Ebola is less contagious than other viral diseases, but is particularly lethal, killing around 40 percent.

The virus re-emerged in August 2018 in the eastern Democratic Republic of Congo where it has so far killed more than 2,200.

The World Health Organization (WHO) says 18,500 died of so-called "Swine flu", or H1N1, which was first uncovered in Mexico and the United States in March 2009.

AFP/File / LUIS ACOSTA The World Health Organization (WHO) says 18,500 died of so-called "Swine flu", or H1N1, which was first uncovered in Mexico and the United States in March 2009

The pandemic alert was launched on June 11, 2009 and lifted on August 10, 2010 but the virus turned out to be not as deadly as first feared.

Vaccines were rushed out, but in hindsight, the West, particularly Europe, and the WHO were criticised for overreacting at a time annual influenza epidemics every year kill between 250,000 and 500,000, according to the Geneva-based UN health agency.

It killed 774, four fifths of whom were in China and Hong Kong. It was transmitted to man from horseshoe bats, eventually spreading to around 30 countries. It had a mortality rate of 9.5 percent.

The deadly H5N1 strain of bird flu killed more than 400 people, mainly in Southeast Asia, after appearing in 2003. It first ravaged poultry farms in Hong Kong, before being transmitted to humans. The WHO declared a global health emergency, but the toll remained limited.

By far the most deadly epidemic of modern times: according to UNAIDS some 32 million people around the world have died of the disease which affects the immune system and leaves people vulnerable to opportunistic infections.

AFP/File / Dibyangshu SARKAR AIDS, by far the most deadly epidemic of modern times: according to UNAIDS some 32 million people around the world have died of the disease

Today around 24.5 million people have access to retroviral drugs which when taken regularly efficiently stop the illness in its tracks and heavily reduce the risk of contamination.

Around one million people died of this disease, according to the US Centers for Disease Control and Prevention (CDC).

Transmitted around the world between mid-1968 and early 1970, it in particular killed many children. It first started in Hong Kong, spread through Asia and reached the United States in late 1968. After lying low for several months it then hit Europe in late 1969.

For epidemic experts, this flu went down in history as the first of the modern era, due to the advent of high-speed air travel.

Around 1.1 million people died of Asian flu, according to the CDC.

The pandemic hit in two aggressive waves. The virus first appeared in southern China in February 1957. Several months went by before it reached America and Europe.

The disease, which results in serious lung complications, in particular affected the elderly.

Spanish flu hit a large part of the world's population in the wake of World War I, killing up to 50 million people, according to the CDC.

AFP/File / - Spanish flu hit the world's population in the wake of WWI, killing up to 50 million, according to the CDC, and is considered the most deadly in history over such a short period

Striking between September 1918 and April 1919, it is considered the most deadly in history over such a short period.

Five times more people died of it than did in World War I. The first victims were recorded in the United States, before it spread to Europe and then around the world.

Its mortality rate was estimated at more than 2.5 percent, according to the CDC.