Lindsey Graham is now Trump's attack dog -- but sooner or later, the blowback will come 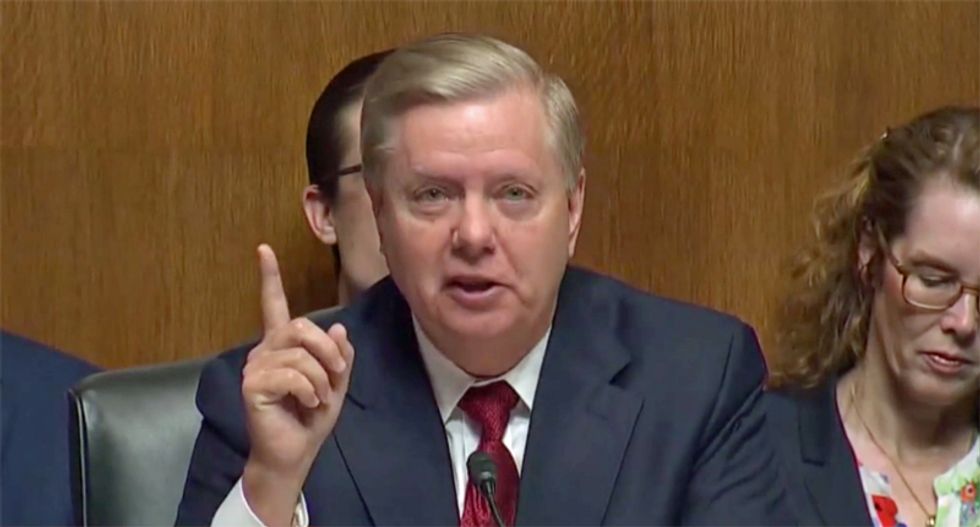 Sen. Lindsey Graham of South Carolina told Fox News' Brian Kilmeade last week "When I go to meet God at the pearly gates, I don't think he's going to ask me, 'Why didn't you convict Trump?'" He may be right about that, but only because he's likely to first be asked to explain what he did afterward. Graham has become Trump's instrument of revenge in the Senate, and he isn't making any bones about it.

Appearing on Judge Jeanine Pirro's Fox News show on Saturday night, Graham made it clear that the president's impeachment for coercing a foreign government to smear his opponent isn't the end of that story. Team Trump is just bringing their bag of dirty tricks back home where partisan warriors in the U.S. government can get the job done right.

Pirro asked Graham if we could expect the Senate Intelligence and Judiciary committees to take a look at the whistleblower and the Bidens and get to the bottom of this world-shaking conspiracy. Graham replied:

The people going to jail are all Trump associates, and Trump was anything but cleared. But if you watch Fox News, you probably don't know that.

Graham declared that he's sending a list of witnesses to the Justice Department, including all the case agents who were involved in the Russia investigation. That's not all, he told Pirro:

I want to know what Obama knew about this investigation. I want to call [Rod] Rosenstein, Sally Yates, [James] Comey and [Andrew] McCabe, all the people who worked on this case, to find out how it got so off the rails and make sure it never happens again. And I want to know who in the White House knew about this counterintelligence investigation against the Republican nominee.

As I have noted before, Graham has been making these noises for a while. One week earlier, as the final impeachment vote neared, he appeared on Fox and made a similar vow:

We'll deal with the whistleblower … We'll deal with Joe Biden's conflicts of interest. (The) Judiciary Committee will deal with all things FISA. Let me tell Republicans out there — you should expect us to do this. If we don't we're letting you down.

On one hand, Graham had a full year as Judiciary chairman, so you'd think he would have made his move by now. On the other hand, I suspect that he promised Trump he would follow through on all these threats if Trump gave up the idea of witnesses in the Senate, so maybe he's on the spot now.

On Sunday, Graham appeared on "Face the Nation" and basically made the same promise, with a slightly smaller portion of right-wing red meat. But he added some details that were quite alarming.

Margaret Brennan asked Graham about the firing of Lt. Col. Alexander Vindman, who so memorably testified during the House impeachment proceedings. Graham was either egregiously misinformed or outrageously lying when he said that Vindman had never been asked tough questions such as, "Did you leak to the whistleblower?" Of course he was asked exactly that by Rep. Jim Jordan, R-Ohio, a Trump minion. Vindman replied under oath, "I never did. I never would. It is preposterous that I would do that."

And Graham sounds as paranoid as the looniest Q-Anon conspiracy theorist here:

But Graham may have revealed something much more important about the Biden issue when he said that he had spoken with Attorney General William Barr on the subject just that morning and was assured that Barr had set up "a process" by which Trump lawyer Rudy Giuliani could funnel information directly to the Department of Justice. What an interesting development, particularly since Barr has just issued an order saying that he must personally sign off on all investigations of political campaigns.

Graham said he was doing this out of concern that the Russian government was feeding Giuliani disinformation. But in the course of all that he blithely announced to the world that the DOJ is now involved in an investigation of Joe Biden — just as Trump and Giuliani had tried to get the president of Ukraine to do last summer.

Graham is all over the place, clearly unclear about the facts and just trying to appease the president. I don't think Trump is going to be appeased.

Trump tweeted before the "Face the Nation" appearance that Graham needs to get cracking with his Judiciary Committee, saying, "he must start up Judiciary and not stop until the job is done. Clean up D.C. now, last chance!" And then there was this:

He wants his pound of flesh. He is determined to make Biden — and, by extension, Barack Obama — pay.

Although it looks more and more unlikely — at least at this moment — that Joe Biden will get the nomination, Senate Republicans have also staked everything on being "right" about Biden being the most corrupt politician in America. They are fully implicated in everything Trump has done and will do going forward. They are made men (and a few women).

If there's one thing we learned from this impeachment process, it's that as much as people in or around the Trump administration may try to circumvent the president's crazy schemes and ridiculous orders, if he wants something done he can find people who will do it. Now that there's absolutely no oversight, he has no limits.

I can see what Graham is trying to do. He's more than willing to throw Joe Biden to the wolves and degrade every institution in America in order to keep Trump happy and assure his own re-election. But he's also concerned that Trump is being manipulated by the Russian government, by way of Giuliani, and thinks that he and Bill Barr can keep a lid on it. But Barr has his own agenda and I'm not sure it's the same one.

Trump has purged the party of anyone who dared to defy him, and his White House is now entirely staffed by sycophants and assassins. It's even become commonplace for top GOP officials to discuss siccing the Justice Department on political opponents:

They are all clowns, from Trump to Graham to House Minority Leader Kevin McCarthy. But don't take any consolation from that. They are very powerful clowns and now there's nothing to hold them back. As Hannah Arendt wrote in "The Origins of Totalitarianism":

Totalitarianism in power invariably replaces all first-rate talents, regardless of their sympathies, with those crackpots and fools whose lack of intelligence and creativity is still the best guarantee of their loyalty.

That describes the Trump party perfectly.