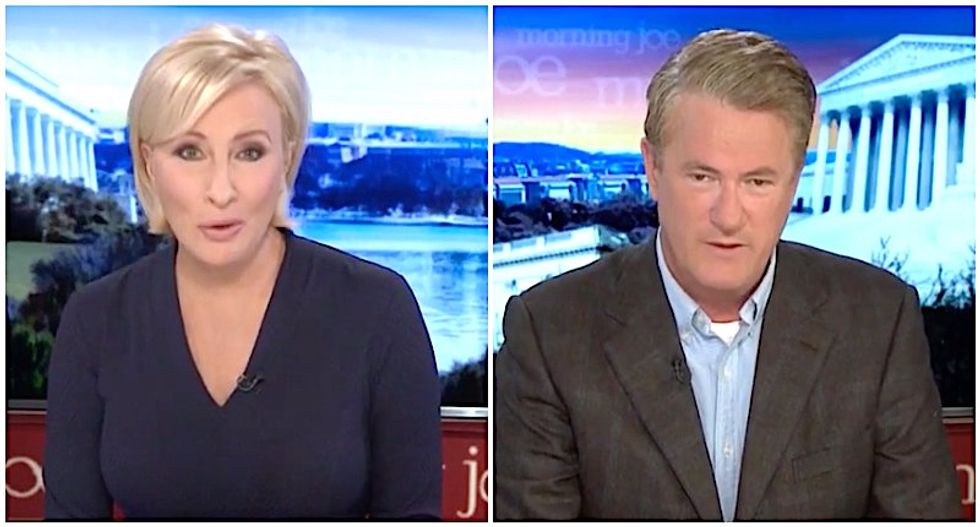 President Barack Obama noted the 11th anniversary Monday of the Recovery Act he signed, which set the stage for more than a decade of economic growth from depths of the worst recession in decades, and Trump lashed out hours later by calling those readily observable claims a "con job."

"Eleven years later, the unemployment rate is down, the stock market is up and President Trump is raging on Twitter," Brzezinski said. "He's not happy."

"Doesn't like facts," Scarborough said. "He doesn't like numbers. It's good for America. He should be happy about America doing well."

"Exactly," Brzezinski agreed. "I would think so."

"You would think he would be," Brzezinski said, "but he's upset because it's Obama."

"The facts are the facts and, of course, facts are stubborn things," Scarborough said. "John Adams may have said it first, Ronald Reagan loved talking about how facts were stubborn things, and here are the facts: That Recovery Act was signed 11 years ago. We've had 11 years of uninterrupted economic growth. It started with the majority through the Obama administration, and if you just take the three years that Donald Trump has been in office, you take that time period and you compare it to Barack Obama's final three years, by just about every measure, Barack Obama's economy was much stronger than Donald Trump's economy."

"What's fascinating is," he added, "the media runs around all the time, and they've been doing it for years, talking about -- parroting what Donald Trump says about how great the economy has been. Yes, this is a recovery that began 11 years ago."

Scarborough pointed to an Axios report from Monday showing six of the last 10 presidents had stronger economies than Trump, although average economic growth had so far outpaced Obama's.

"Six out of the last 10 presidents have had stronger economies, bigger economic growth, bigger GDP growth than Donald Trump," Scarborough said, "which means that once again, Donald Trump is in the bottom half of his class."