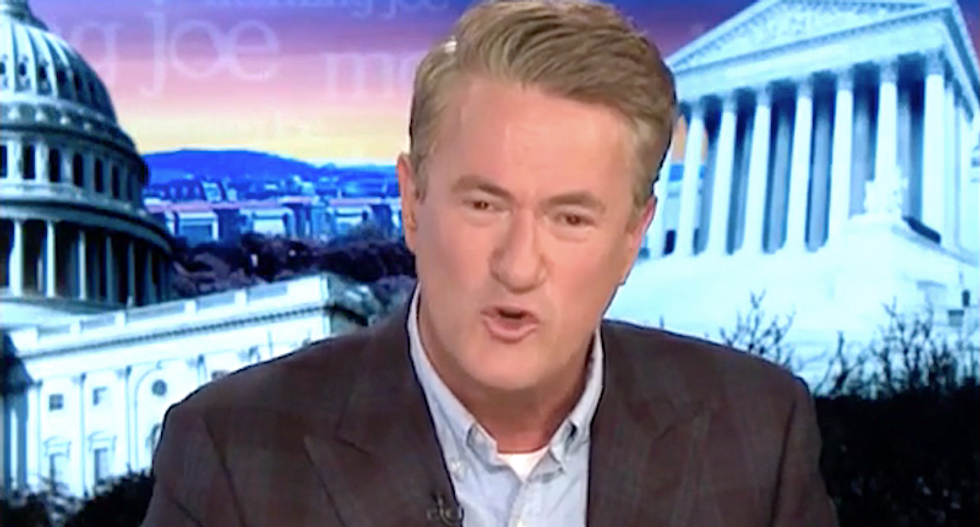 The "Morning Joe" host called out evangelical leaders and Republican lawmakers who clapped and laughed as the president attacked his enemies and made a mockery of their religious values during the National Prayer Breakfast.

"You know, evangelicals, anybody that's grown up in a church, evangelical church, Catholic church, Christian church, understands the blasphemy there -- they really do," Scarborough said. "You had Donald Trump, first of all, saying, 'I don't agree with you, Arthur (Brooks). Well, it wasn't Arthur he was disagreeing with, it was the words of Jesus Christ he was disagreeing with."

"This is a man that has said he's never had to ask Jesus Christ for forgiveness before," Scarborough added. "This is a man who never read the Bible his entire life. He handed me a Bible one time in early fall of 2015 his mother gave him. It's obvious it hadn't been opened for 40 years. He talked about 2 Corinthians, couldn't name a single book in the Bible. He couldn't tell you the difference between the New and Old Testament, and yesterday he mocked the words of Jesus Christ."

"Since Franklin Graham and Jerry Falwell Jr., Robert Jeffress and all of these other so-called religious leaders are not telling those of you who weren't raised in the church why it was so grotesque for people at the National Prayer Breakfast and in the White House to be laughing at Donald Trump mocking the words of Jesus Christ, let a twice divorced back-slidden Baptist tell you," Scarborough said.

"Let me read you the words that the president of the United States as a National Prayer Breakfast was mocking yesterday, and how sad," he added. "Think about it, how sad. Not a single evangelical leader came out yesterday and stood up for the words in the Gospel of Jesus Christ, taken from the Sermon on the Mount -- these aren't footnotes from [the Book of] Nahum -- taken from the Sermon on the Mount, the centerpiece of the Gospels. Jesus said this -- 'You have heard it said, love your friends and hate your enemies, but I tell you, love your enemies and pray for those who persecute you, and pray for those who persecute you, that you may be sons and daughters of your father in Heaven. If you love only those who love you, what reward will you get? And do not even evil men do that? And if you greet only your brothers, only your friends, what are you doing more than others? Do not even pagans do that?'"

"Be perfect, therefore, as Arthur Brooks was saying yesterday, as your heavenly father is perfect," Scarborough continued. "It is the centerpiece, whether you were a believer or not, it is the centerpiece of the Gospels of Jesus Christ to love your enemies, to forgive those who have persecuted you, and to show mercy and kindness and meekness. That should be your goal, and yesterday at something called the National Prayer Breakfast, Donald Trump mocked the words of Jesus Christ, and he got applause for it."