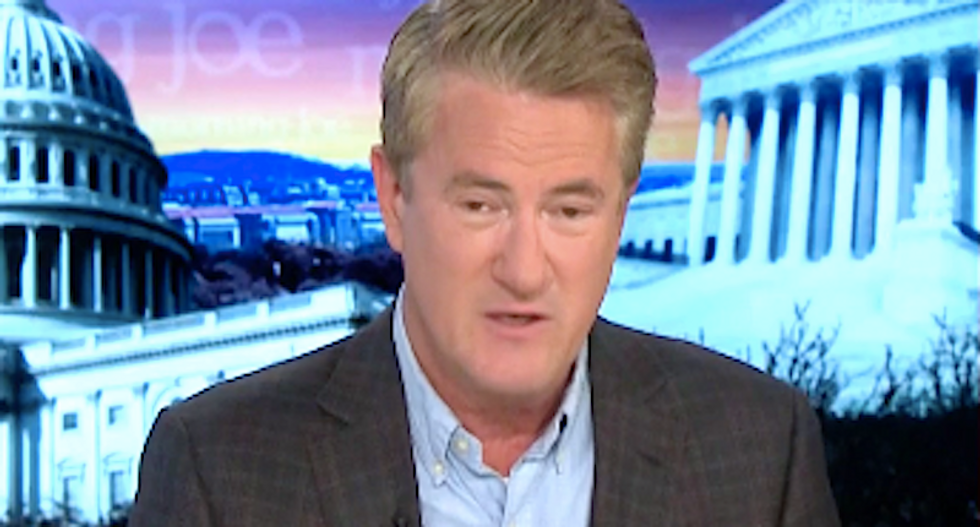 MSNBC's Joe Scarborough ripped President Donald Trump for wrecking his own post-acquittal approval by warping the Justice Department as part of a revenge campaign.

The "Morning Joe" host said he'd made fools of Republican senators who voted to acquit in his impeachment trial, and wiped out any gains he'd made in his public approval by firing Lt. Col. Alexander Vindman and directing the Justice Department to politicize prosecutions of his friends.

"(Republicans) are either buffoons or liars trying to cover up for the fact that they're too afraid to do the right thing because they may lose a couple of points for their approval rating," Scarborough said. "This is so predictable. Donald Trump gets past the Mueller investigation, Robert Mueller testifies -- what happens? Well, the next day he starts in on Ukraine and he starts doing things that gets him impeached, rightly impeached -- [he] wants to call it a fake, his lackeys on television, listen to words of Republicans and the Senate who said what he did is terrible wrong, we just don't have the courage to impeach him."

Some GOP senators justified their acquittal by insisting Trump had learned his lesson, but Scarborough said the opposite was clearly true.

"What happens after this?" he said. "He's now just full-on once again challenging the independence of the federal judiciary, he is corrupting the Department of Justice in a way that we haven't seen since John Mitchell was the attorney general for Richard Milhous Nixon. He's telling the military to investigate a war hero, simply because what that war hero reported was the truth."

Scarborough warned that those efforts would end up blowing up in Trump's face.

"We could go through a laundry list of this, but, again, all Donald Trump is doing is hurting himself," he said. "Here's a guy who can't stand success, a spate of polls has come out over the past couple of days showing his approval ratings back in the low 40s again, and 44 percent with registered voters. Another poll showing him sitting at 43 percent, 44 percent. This is a guy, again, he can't stand success. Everybody was talking about, oh, his approval rating are at 49 percent -- no, he is a 43 percent president, and that's all he will ever be, because he can't handle success."

"He acts too much like punks that we see on playgrounds," Scarborough added. "They may be the worst basketball players ever, but you played against them. I played against them in pickup games, they score two points and go down the court acting like they're Magic Johnson."