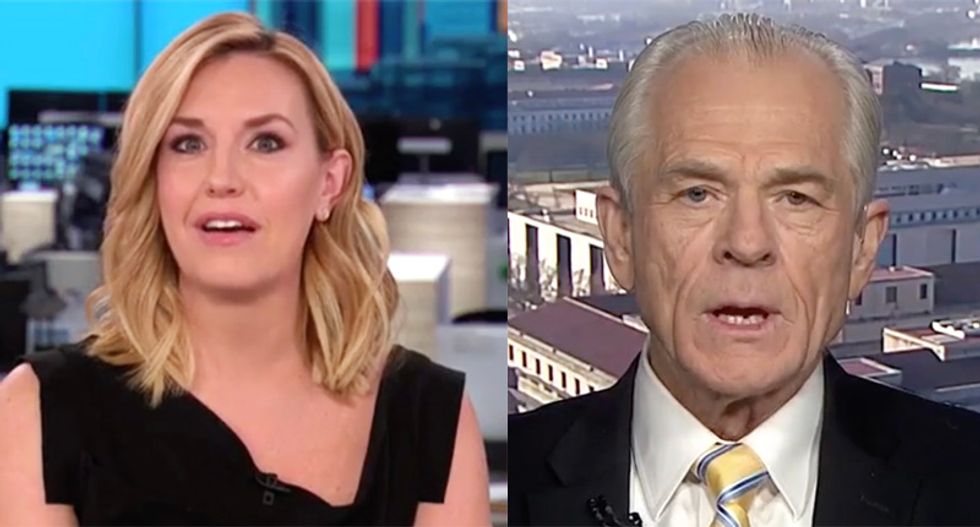 "I want to ask you about the budget released from the White House," said Harlow. "As you know, it does not eliminate the federal deficit in ten years. And as you know, when the president was running, because you were advising him, I remember meeting with you during that time, he promised to the Washington Post he'd eliminate the national debt if given eight years in office. What happened to that promise?"

"Well, we still have five more years to go, and I think we can get there," said Navarro.

"Yeah, but even this budget — no, no, but this budget says it's going to take to 2036 to even start narrowing, not eliminating it," said Harlow.

"Just let me make this point. Elections do have consequences," said Navarro. "One of the problems we faced in the short term with the Democrats holding the House is that when we made the last budget deal, that was more expenditures than we otherwise would have had. The trick of the budget, really, is not cutting expenditures or raising taxes so much as growing faster. The difference between the 2 percent growth rate and 3 percent growth rate is all the difference in the world."

"Kevin Hassett, your good friend, formerly worked with you, said there's aggressive growth projections in this budget, and when you look at the tax cut impact on all of this, it was a big factor," said Harlow. "Even he admitted it. Listen to this with me just last week."

"The military spending is way above what we originally thought, which the president has advocated," said Hassett in the clip. "And then the tax cuts reduced revenue by more than we thought in the first year."

"Fair to say the tax cuts aren't paying for themselves as promised and just adding to the deficit?" said Harlow.

"Well, Kevin was one of the architects of those tax cuts," said Navarro, looking slightly thrown. "And if he were sitting in this chair, he'd say the tax cuts are doing great to stimulate this economy. Things like opportunity zones, helping blue-collar workers, lowest unemployment rate in history for Blacks, Hispanics, Asians, veterans."

"No, I hear you on all of that, but they're adding to the deficit," Harlow pressed him. "I'm asking about the president's promise to the American people and Republicans, who used to care about these things, Peter."

"So, look, the economy is doing great," said Navarro. "We've got a great economic plan to do it. If we get back the House of Representatives, we'll have a lot better fiscal situation than we do now. The bond market doesn't seem to be worried about the prospect of a large fiscal deficit, which I think is supportive of President Trump's economic policies, because they believe that our economy will grow faster because of the Trump policies."

"Let me ask you about this," said Harlow. "The president overnight slamming former President Obama for what he calls taking credit for the good economy. The president was marking 11 years since the Recovery Act. Of course, the depths of the great recession. When you look at the numbers, we have not yet seen one quarter of 4 percent economic growth under President Trump. We saw that four times under President Obama. And if you compare job growth in the last, you know, 36 months of President Obama's term, it was 227,000 jobs on average and President Trump, also good, but 191,000 jobs per month on average. Don't both presidents deserve credit for good economies?"

"If you lived through the Obama years, which everybody watching this show did, they remember what it was like," said Navarro. "What President Obama did was double the debt from $10 trillion to $20 trillion ... what President Trump realized is that we had a structural problem, primarily with offshoring our jobs and overregulation and high taxes relative to around the world. He fixed those structural problems. That set up the economic boom that we're having right now. And back in the Obama-Biden years, it was horrible. We had this new normal of a growth under 2 percent—"

"Peter, I'm sorry, I can't let — Peter, I am just going to pull back the numbers up," said Harlow. "These are numbers from the Bureau of Economic Analysis. Over 4 percent economic growth, four quarters under President Obama. We've not seen growth above 4 percent on a quarterly basis under President Trump. It's a good economy now. It's a great economy now. All I'm asking you is, wasn't it a good economy then as well?"

"No, it was not. It was a horrible economy during the Obama years," said Navarro. "If you can tell me that higher regulation, higher taxes are going to really propel growth like the Democrats want to do, I got a bridge to sell you in Brooklyn, which i think you're probably close to right there ... but we can have that debate. This is all politics."

"Well, actually, I was just asking about the numbers," said Harlow.