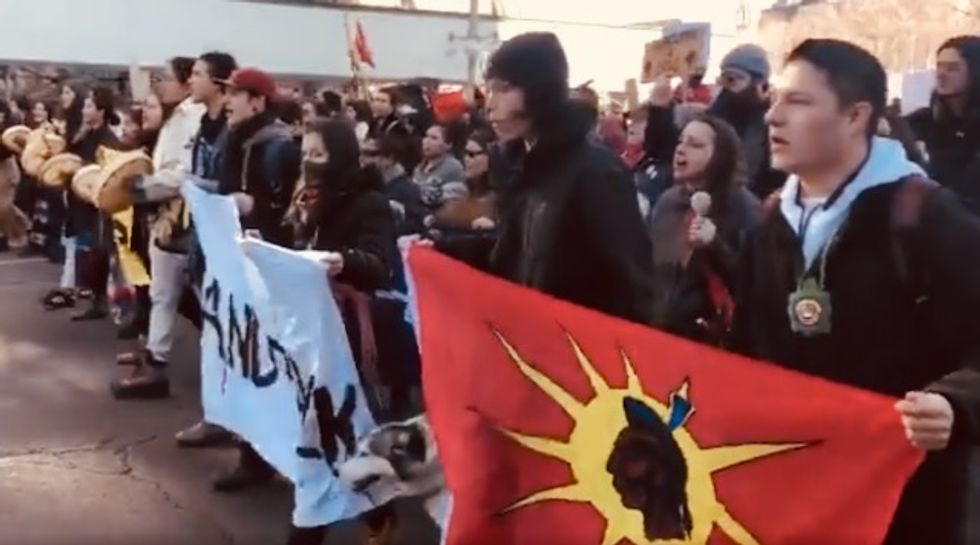 Police moved in on the Tyendinaga Mohawk Territory demonstration as hundreds of people marched through downtown Ottawa.

At least 10 protesters were arrested Monday morning during a Canadian police raid on a Tyendinaga Mohawk Territory camp beside a railway near Belleville, Ontario, which was established on Feb. 6 in solidarity with Wet'suwet'en First Nation hereditary chiefs and land defenders who are trying to prevent a fracked gas pipeline from cutting through their unceded lands in British Columbia.

Dozens of officers moved in hours after protesters declined to comply with a midnight deadline from the Ontario Provincial Police (OPP) to clear the camp. Some journalists reported that police were keeping them far away from the site. However, video footage of officers grabbing and taking down protesters was broadcast on television and circulated on social media.

Indigenous and climate activists expressed outrage over the raid, which came after Canadian Prime Minsiter Justin Trudeau said Friday that all railway blockades across the country in support of the Wet'suwet'en "must now come down." Over recent weeks, the demonstrations have halted passenger and freight trains throughout the country.

"Human self-destruction on display: Canada arresting and brutalizing Mohawk land defenders as climate crisis rages on around the world," Tara Houska tweeted Monday with a clip of the OPP raid. Houska, an Ojibwe from Couchiching First Nation, is an attorney and Indigenous rights activist.

The global environmental advocacy group 350.org addressed the raid and the broader fight against the pipeline in a statement Monday.

"350.org stands in solidarity with the hereditary chiefs of the Wet'suwet'en Nation—along with allied Indigenous land defenders in Tyendinaga and beyond—in their assertion of Indigenous rights and title over their ancestral homelands," the group said. "We condemn the police raids, colonial violence, and divisions being sown by the Canadian and B.C. government in pursuit of the Coastal GasLink fracked gas pipeline."

We denounce the actions of both Prime Minister Trudeau and Premier John Horgan. They have built their political legacies upon promises of reconciliation and climate leadership. Yet they are allowing the militarized Royal Canadian Mountain Police officers to enter unceded and unsurrendered Wet'suwet'en territory to enforce an illegal injunction. They have encouraged similar actions by the Ontario Provincial Police in Tyendinaga. These actions serve to protect the interests of the Coastal GasLink corporation over the collective rights of the Wet'suwet'en people who have been saying no to fracked gas and tar sands pipelines for over a decade, and over Indigenous rights more broadly.

The group urged the Canadian government to honor its obligations under Article 35 of the Canadian Constitution, the United Nations Declaration on the Rights of Indigenous Peoples, and the Paris climate accord.

Greenpeace Canada climate campaigner Mike Hudema tweeted Monday, "Shame on you, [Justin Trudeau]," and pointed out that the prime minister previously called for "patience" and discussions to end the railway blockades. Noting Trudeau's supposed commitment to improving the Canadian government's relationships with First Nations, Hudema added that "reconciliation is found by making different choices not repeating the same historical wrongs.

Is this what reconciliation looks like? Remember, this is the territory of the Tyendinaga Mohawks. They are not ac… https://t.co/39XBnyik6o
— Greenpeace Canada (@Greenpeace Canada) 1582556217.0

Hours before the arrests, the Mohawk People in Tyendinaga said in a statement that "there has always and continues to be a willingness from the Tyendinaga Mohawks to discuss an exit strategy of the CN Rail Main line." The statement added, "We want to remind the public that we have never physically obstructed the tracks and we have been in peaceful solidarity with the Wet'suwet'en."

Although the demonstrators at that site have not directly blocked the tracks, "the rail lines have said that they do not feel it is safe to pass trains so close to the blockade, and that they cannot maintain their networks without passing trains through that spot in eastern Ontario," according to CTV News.

The Tyendinaga Mohawks have condemned Royal Canadian Mounted Police (RCMP) raids targeting land defenders and called on RCMP to leave Wet'suwet'en territory. In a statement later Monday, the Mohawks denounced the OPP's use of force and said that as officers were arresting demonstrators along the rail tracks, RCMP patrolled territory of the Wet'suwet'en Unist'ot'en clan, which has constructed a camp in response to TC Energy's pipeline. The Unist'ot'en Camp Twitter account shared photo and video footage showing RCMP's presence in the area on Monday.

"This has come at a time when [Minister of Indigenous Services] Marc Miller as well as the Mohawk People in Tyendinaga and the Wet'suwet'en hereditary chief were told there would be an announcement at noon today that the RCMP was going to be leaving their territory," said the second Mohawk statement. "This is suggesting that this unnecessary use of force was a coordinated face-saving measure of the federal government as a peaceful resolution was being negotiated."

An RCMP spokesperson confirmed to VICE Monday that officers are still patrolling Wet'suwet'en territory but added that the RCMP is currently in talks with hereditary chiefs.

Meanwhile, in Ottawa Monday, Trudeau convened a meeting of senior cabinet ministers to discuss the rail blockades while hundreds of people took part in "All Eyes on Parliament: Rally for the Wet'suwet'en," which was organized by various Indigenous and environmental groups.

#BREAKING Hundreds march down Wellington in downtown Ottawa towards a wall of police - more to come. This in suppor… https://t.co/3UCuliYVaU
— Christina Succi (@Christina Succi) 1582560090.0

Protesters marching through the streets of downtown Ottawa in support of the Wet'suwet'en chanted, "Hey hey, ho ho, RCMP has got to go."

Outside Trudeau's meeting, Transport Minister Marc Garneau told reporters that "we are committed to reconciliation and we are committed to sitting down and having a dialogue over the specific problem that exists at the moment with the Wet'suwet'en... But at the same time the barricades had to come down because it was having a profound effect on the economy."