Republicans want to either rule America -- or destroy it for everyone else: columnist 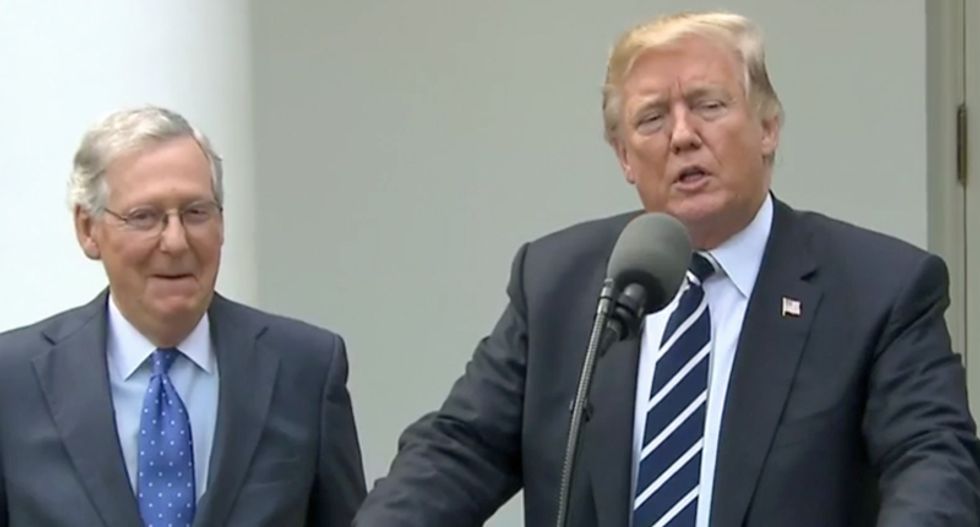 In a scorching column for the Daily Beast, David Rothkopf writes that the refusal of the Republican-controlled Senate to agree to hear witnesses in the impeachment trial of the Donald Trump is one of the darkest moments in U.S. history -- ranking up with the start of the Civil War.

Getting right to the point, he wrote, "Jan. 31, 2020, was the worst day for democracy in America since April 12, 1861, when South Carolina forces opened fire on Fort Sumter. Both days represented a moment when an old guard representing a dying way of life placed their own survival ahead of that of the United States and our Constitution," before adding, "It is an irony that the GOP was founded as an anti-slavery party, a harbinger of the changes to come in the mid-19th century, and today has become a reactionary force surviving by stoking fears of the massive U.S. social transformation that is already well underway."

Focusing on the Senate impeachment trial that is expected to culminate with the acquittal of the president along party lines, he explained, "What took place in the Senate on Friday when it voted not to hear witnesses in the trial of Donald Trump— when witnesses such as John Bolton were available who could corroborate his guilt—may have been the most damaging blow of all. Because this decision effectively ensured that Trump would not only be acquitted of crimes he certainly committed, it also ensured a number of key points made by Trump and his defenders would in months and years to come be supported by the precedent of the momentous Senate action. These include a virtual ratification of the idea that anything a president might do to win reelection would be acceptable."

The columnist goes on to state that the Republican Party fears the rising tide of change in the country so they are hell-bent are destroying all norms in a desperate attempt to hold onto power in a deeply divided country.

"Now they know it is not only OK for them to try put a thumb on the scale of the U.S. elections but that the president and the senate of the United States will ensure they are protected if they do it," he wrote. "The desperate GOP, seeing the clock running out on their brand of racism- and ignorance-fueled, aging white male-based power, will compound the above with renewed efforts to suppress the vote during the months ahead. Who is going to stop them? The courts they have packed? The Department of Justice? The president and the Republican Party that are rooting for their success?"

"This election is likely to be the most at risk to foreign and domestic meddling and distortion in modern history," he continued. " t is clear that the GOP will stop at nothing, use every legal or semi-legal trick in the book and then, when they run out of those, they will move on, as the president did, to the illegal—and the GOP will seek to find new ways to forgive or even endorse that behavior."

"Where they can undermine the law and the Constitution to advance their own narrow interests they will continue to do that, without regard for the lasting damage they are doing—because for them there is only now. For them, tomorrow is the enemy and certain defeat," he concluded.