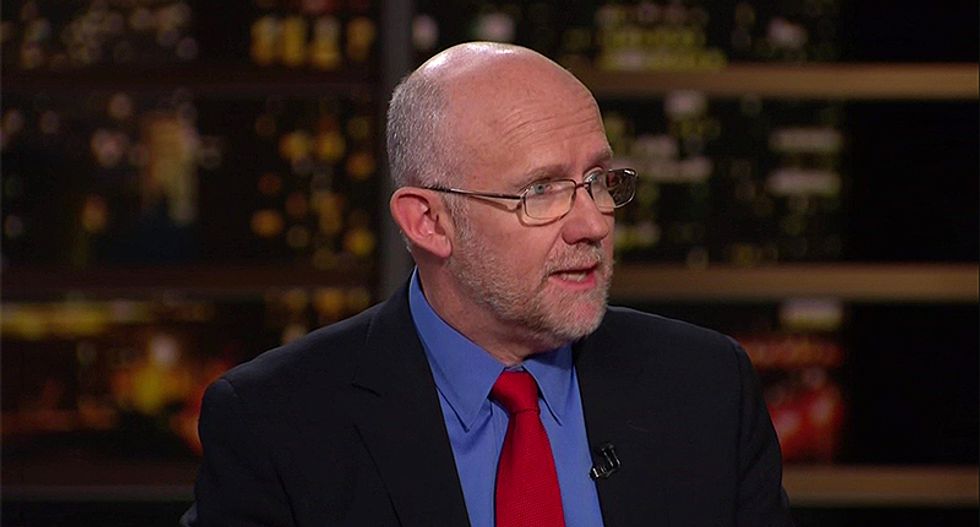 In an absolutely ferocious column for the Daily Beast, GOP campaign strategist Rick Wilson ripped into the Republican Party for acquitting Donald Trump on impeachment charges and thereby unleashing a vengeful "man more suited to a padded cell" upon the U.S. public.

Using Trump's two Thursday speeches -- which Wilson described as indicative of "Trump’s usual mental frailty, verbal dysentery, pathological mendacity, tertiary syphilis, amphetamine addiction, and brain worms' -- as a jumping-off point, the columnist began, "The recently acquitted and utterly guilty president of the United States, King Donald the Malevolent, let his rage, manias, and petty vengeances out to play, bellowing like a third-world warlord in a display of political performance art that was almost unbearably grotesque in its affront to American values, the law, and our collective sanity."

Wilson then made his case.

"Like all authoritarians, Trump was sending a crisp signal that he is above the law. This was the core of it all, the triumph of corruption. The praise of his allies had a sting to it, though most were too dumb or too scared to understand it; 'You are my servants. Today, you did a good job for me. But, really, what have you done for me lately?' Those members of the House and Senate with a pulse know--and secretly admit, as Sherrod Brown wrote in the Times–that Trump was guilty, and from fear they let him off." he wrote. "Trump intends to punish his enemies, real and perceived. That was abundantly clear today. His hit list of enemies was like nothing we’ve ever seen a president say in public."

According to Wilson, who has been noting on his Twitter feed that he and his family have been facing a deluge of threats, the president was also sending a message to his followers that they have free rein to go after anyone who dares criticize him.

"He knows his allies and the rest of the online thugocracy he’s empowered doesn’t need to be told, 'Tell Congressman X that we’re going to kill his kids if he’s critical of me.' He knows damn well it’s going to happen. He knows the threats from his supporters to his opponents are constant, vile, and personal. Trust me, I live it every day," he wrote. " He’s going to continue to act as the corrupt, lawless, warlord president that the Republicans unleashed on America this week. Sitting at his master’s feet was Attorney General and Trump lapdog Bill Barr, a man history will record as the architect of the coming festivities."

Wilson then focused his ire on GOP lawmakers who have been standing by -- and will continue to stand-by -- while the president does as he pleases.

"Donald Trump may be utterly ignorant of history, but he has the unerring instincts of a sociopathic authoritarian for the seizure of power, the destruction of institutions around him, and complete confidence that the weak men around him will cheer every outrage and excess. Trump is a man who will revel in the shock and terror of his allies when he turns on them, feeding on their misery," Wilson wrote. "Many of the senators who said Trump had done something wrong but not something impeachable sat in a room today and clapped like trained seals being tossed chum at the Douchebag Seaquarium. Trump rubbed his guilt in their faces, having learned exactly the opposite lesson that they imagine."

"Trump knows he can break the law, lie with vigor, obstruct justice, threaten Americans with political and personal retribution, shame the presidency, endanger the country, enrich himself and his goon spawn, and nothing can be done to stop him," he added. "The monster is out of the cage. The Republicans set him free."