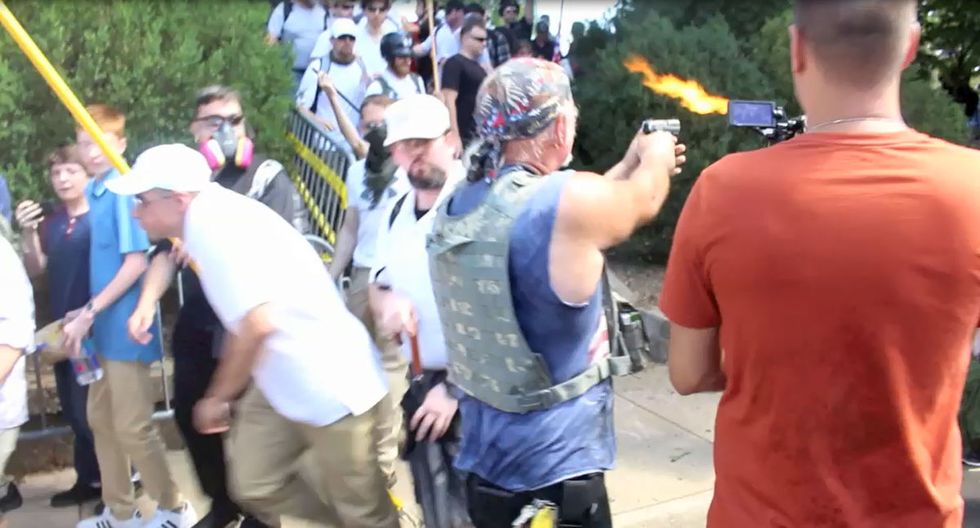 KKK leader Richard Wilson Preston firing on counter-protesters at "Unite the Right" rally in Charlottesville in August (image via screengrab).

A right-wing extremist movement is recruiting on social media to target liberals and law enforcement in a violent uprising called the "boogaloo."

The loosely organized movement is trolling for members on mainstream platforms such as Facebook, Instagram, Reddit and Twitter, in addition to 4chan and other fringe sites, to promote a second Civil War, reported NBC News.

“When you have people talking about and planning sedition and violence against minorities, police, and public officials, we need to take their words seriously,” said Paul Goldenberg, of the Homeland Security Advisory Council.

Hate groups have pushed for anti-government violence in the past, but the "boogaloo" movement appears to be new development in the spread of far-right extremism.

The nonprofit Network Contagion Research Institute has been tracking social media posts, memes and comments and found examples of the "boogaloo" phenomenon spreading online and showing up at real-world events.

Researchers began noticing the boogaloo movement last year, when gun militias and white supremacists started using a reference from the breakdancing movie “Breakin’ 2: Electric Boogaloo” to refer to an impending violent conflict that originated on the 4chan message board.

Use of the term has jumped nearly 50 percent on Reddit and Twitter in recent months, and spiked during a November standoff between an Army veteran and New York police during a domestic dispute, and then spiked again around the House’s impeachment of President Donald Trump.

Boogaloo-themed public groups and accounts on Facebook and Instagram have garnered tens of thousands of members and followers, the report found.

Membership in some of those Facebook groups have nearly doubled since last week, when NCRI's report "went viral" among law enforcement and intelligence communities.

Faecbook has shut down two of the most popular boogaloo groups were no longer available after the report's release, and a spokesperson for the tech giant said the company monitored groups that call for violence.

“We’ve been studying trends around this and related terms on Facebook and Instagram,” the spokesperson told NBC News. “We don’t allow speech used to incite hate or violence, and will remove any content that violates our policies. We’ll continue to monitor this across our platform.”