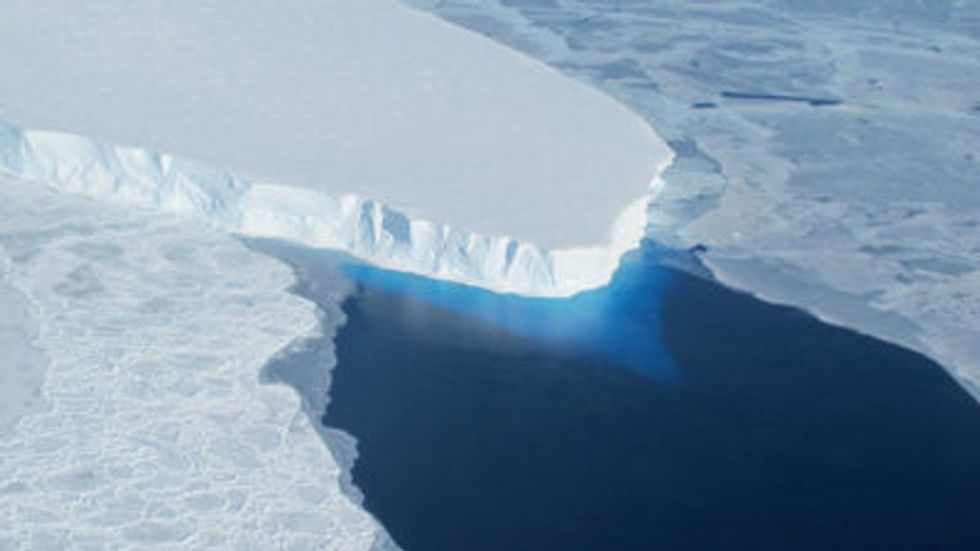 A study by British and American scientists revealed that a massive sheet of ice known as the "doomsday glacier" is melting faster than experts previously believed—edging the world closer to a possible sea-level rise of more than 10 feet.

Researchers at New York University and the British Antarctic Survey drilled through nearly 2,000 feet of ice in the Thwaites glacier in West Antarctica, to measure temperatures at the 75-mile wide ice sheet's "grounding line," where the ice meets the ocean.

The water just beneath the ice was found to be 32º Fahrenheit—more than 2º above freezing temperature in the Antarctic region.

350.org co-founder and author Bill McKibben was among the climate action campaigners who expressed alarm over the new study.

The researchers expressed concern that the water beneath the glacier could be even warmer in other areas.

Scientists refer to Thwaites as the "doomsday glacier" due to the dire implications its rapid melting could have for the planet. Though a 10-foot sea-level rise would likely take years, the melting of the glacier could eventually mean the U.S. would lose 28,800 square miles of coastal land—pushing 12.3 million people currently living in those areas out of their homes.

"Warm waters in this part of the world, as remote as they may seem, should serve as a warning to all of us about the potential dire changes to the planet brought about by climate change," Holland said.

The Thwaites glacier has lost 600 billion tons of ice over the past several decades, accelerating to as many as 50 billion tons per year in recent years.

"There is very warm water there, and clearly, it could not have been there forever, or the glacier could not be there," Holland told the Washington Post of the recent findings, suggesting the water has gotten warmer recently.

Scientists are especially concerned about the Thwaites because its configuration is an example of "marine ice sheet instability."

Thwaites gets deeper and thicker from its oceanfront region back into its interior in the heart of West Antarctica. This is known to be an unstable configuration for a glacier, because as the ocean continues to eat away at its base, the glacier becomes thicker, so more ice is exposed to the ocean. In turn, that ice flows outward faster.

BBC released a short video detailing the scientists' journey to the Thwaites glacier and their findings.

"The ice rises almost a mile from the sea bed and it's collapsing into the sea at two miles a year," the narration explains. "If Thwaites melts, it will increase sea levels worldwide by half a meter. But it sits in the middle of the Antarctic ice sheet and there's three meters more of sea level rise locked up in there."

"That is really, really bad," Holland told the Post of the most recent discovery. "That's not a sustainable situation for that glacier."