Should the Democratic presidential candidates announce their VP picks now? 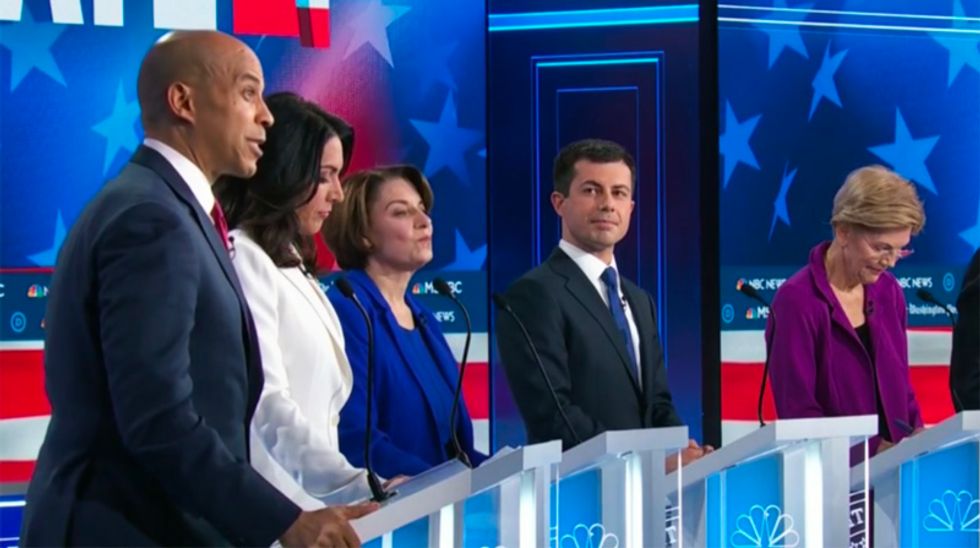 Some pundits have recently suggested that presidential candidates should identify their running mates before the caucus and primary season gets under way. Ted Rall wrote on January 24, 2020 that the United States should require presidential candidates to “announce their veep picks at the same time they announce their intent to run.”  Rall believes such a requirement would be more democratic and provide primary voters useful information about the possible successor.  The same day, Matt Bai made the narrower suggestion in the Washington Post that older presidential candidates in this year’s race should “at least release a short list of possible running mates now” before the voting begins.  Bai’s column focused on Senator Bernie Sanders but he would apply this requirement to former Vice President Joe Biden and Senator Elizabeth Warren, too. Gordon Weil has suggested that Biden, Sanders, and Donald Trump disclose their running mates before the first caucuses and primaries.  Jared Cohen argues that a Democratic presidential candidate should name his or her running mate “now” as a strategy to “surge ahead of a crowded field.”

Yet increasingly most presidential candidates conclude that their political and governing interests coincide when choosing a running mate and that both dictate choosing a running mate who is capable of being president. Most vice-presidential candidates during the last six or seven decades have been politicians whose past or subsequent public service marked them as presidential figures as perceived by reachable voters. Recent vice presidents Richard M. Nixon, Lyndon B. Johnson, Hubert H. Humphrey, Walter F. Mondale, George H.W. Bush, Al Gore, Dick Cheney, and Joe Biden were among their parties’ leading lights when chosen for their ticket.  Defeated running mates like Estes Kefauver, Henry Cabot Lodge, Edmund Muskie, Bob Dole, Lloyd Bentsen, Jack Kemp, Joe Lieberman, Paul Ryan, and Tim Kaine were also among their parties’ most well-regarded figures when chosen. Dan Quayle is often mocked but he was a well-regarded senator who made important contributions to the Bush administration.  Geraldine Ferraro’s credentials (three terms in the House of Representatives) were more modest than most but she was chosen when women were largely excluded from public service.  Senators like John Sparkman and especially Tom Eagleton had distinguished careers in the upper chamber (Eagleton was one of two former senators given the unprecedented honor of speaking when the Senate celebrated its bicentennial) and Sargent Shriver had performed ably in the executive branch in domestic and foreign policy roles. Mike Pence is widely viewed as a plausible future presidential aspirant.  The questionable choices—William Miller, Spiro T. Agnew, John Edwards, Sarah Palin—were chosen by candidates facing uphill races (Miller, Palin) or were simply mistakes.

History suggests that Rall’s reform (that presidential candidates announce their running mate when they announce their candidacy) and Weil’s (that certain older candidates announce their running mates before caucus or primary voting begins) would diminish the quality of vice-presidential candidates.  Rall’s and probably Weil’s proposal would eliminate from consideration anyone running for president, thinking of that option or supporting a rival candidate.  John F. Kennedy could not have chosen Johnson, Ronald Reagan Bush, and Barack Obama Biden.  The possibility that Humphrey would run in 1976 would have precluded Mondale, a Humphrey protégé, from being Jimmy Carter’s running mate.

Moreover, the context in the summer of a presidential election year, when presidential candidates identify their running mates, is more conducive to a good choice than a year or two earlier when presidential candidates now announce. Some successful presidential nominees—Jimmy Carter, Mike Dukakis, Bill Clinton, Obama, Trump, among others—were surprises.  It’s inconceivable that Mondale, Bentsen, Gore, Biden or Pence would have cast their lot with these improbable presidential nominees.  Kemp wouldn’t have signed on as Dole’s running mate early on either.  Cheney declined to be considered as George W. Bush’s running mate in spring 2000 but changed his mind after working with Bush suggested what his role might be given Bush’s operating style.

The transformation presidential candidates experience between candidacy announcement and vice-presidential selection encourages better decisions.   Understandably, presidential candidates and their top aides initially focus on securing the nomination.  The vice-presidential selection becomes their major pre-occupation once that success is assured.  Carter would not have chosen Mondale initially.  Carter only concluded Mondale was his best option only after they spent time together and Carter spoke to others who knew the prospective candidates. Dole disparaged Kemp as “the Quarterback” but after examining alternatives concluded that choosing this long-time rival made sense.  Sometimes presidential candidates learn about running mates as they interact through the primary process, an experience that probably contributed to Romney’s selection of Ryan and Obama’s of Biden.

Finally, vice-presidential candidates are chosen after a long, intensive and intrusive vetting process.   That essential part of the vice-presidential selection process would be prevented if the decision were made as Rall and Weil propose.

Cohen recommends naming a running mate now for its political, not governing, benefits.  Yet it is not at all clear that the sort of running mate who could conceivably move the needle in a positive direction would decide to join forces at this early stage with a presidential candidate who needed to pursue such an atypical strategy to succeed.  Unless a presidential candidate secured a running mate who was appealing and ready for prime time, his or her candidacy would likely be hurt, rather than helped.

Bai starts from a sensible premise (that the likelihood of a succession is greater with an older president) and his proposal, that older candidates announce a list of perhaps three running mates, is more limited in its reach (to older candidates) and is less intrusive (a list, rather than a choice).  Yet history shows that vice-presidential selection is not so unilateral as he suggests and he is overly-optimistic regarding the merits of his proposal.

Although presidential candidates select a running mate they do so after lengthy consultation and after considering the likely reaction of reachable voters.  Bai is right that the 2008 Republican convention accepted Palin but that was because it liked her and inferred from her selection that Senator John McCain was more conservative than the delegates feared.  In fact, part of the reason McCain chose Palin, not Lieberman, was he feared an adverse reaction if he chose Gore’s former running mate. Sure, conventions don’t want to make trouble for their presidential nominee but they rubber stamp vice-presidential nominees partly because nominees weigh party sentiment heavily in making the choice.  And party sentiment doesn’t prevent a bad choice.  Edwards had done well in the primaries and was very popular with the Democratic electorate and convention.

A requirement that older candidates disclose a list from which they would choose their running mate would be hard, if not impossible, to implement and counterproductive.  A list limited to three would exclude some who, come summer, were attractive running mates.  Rival candidates might be omitted but if not, they might feel compelled to slam the door on the vice presidency to preserve credibility as a presidential candidate.  An unlimited list would be unrevealing.  In 1988, the Bush campaign leaked some possible running mates on the eve of the convention.  It was sufficiently long that the likelihood that Quayle would be chosen seemed so inconceivable that his prospects didn’t draw any scrutiny.  And if such a proposal has merit, which it doesn’t, why not apply it to all candidates since the modern vice presidency helps in governing more often than it supplies a successor and the selection provides information regarding a candidate’s values.

The vice-presidential selection system has worked pretty well in recent decades and has allowed presidents to enlist the help of able vice presidents who are compatible with them.  That progress is best preserved by giving presidential candidates incentive to choose well, not by introducing artificial and counter-productive requirements.

Joel K. Goldstein is the author of The White House Vice Presidency: The Path to Significance, Mondale to Biden and other works on the vice presidency.

Thom Hartmann
If you think Republican politicians in Congress are corrupt, you ain’t seen nothing yet. Check out how little it costs to purchase access to a Supreme Court justice!

Conservatives on the Supreme Court famously legalized billionaires and corporations bribing politicians back in 1976 and 1978, respectively (Buckley v Valeo and First National Bank v Bellotti), doubling down on and expanding the doctrine in 2010 (Citizens United).