The rise and fall of Angela Merkel's 'mini-me' 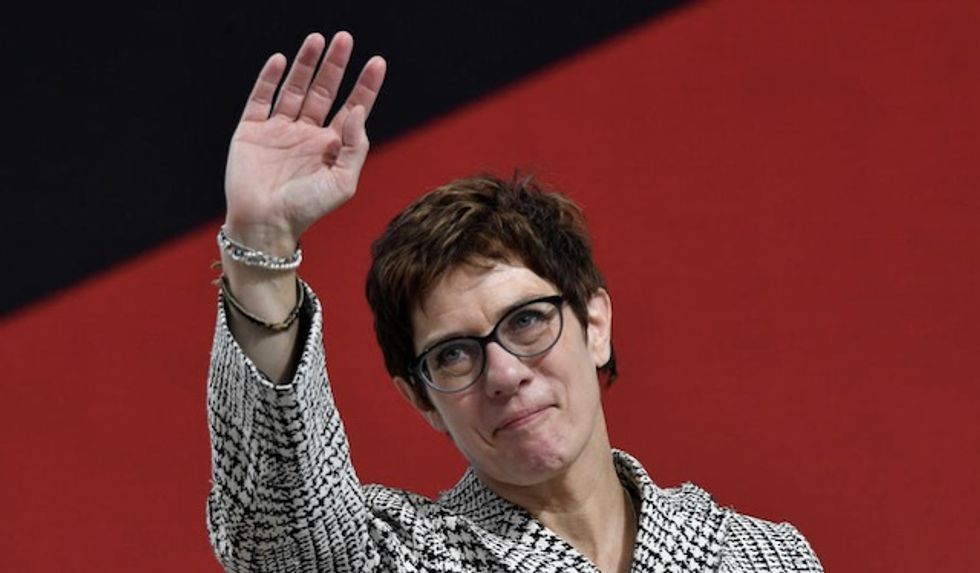 In the end, the "mini Merkel" nickname was perhaps too big to live up to.

Barely a year after replacing her mentor as head of Germany's CDU party, Annegret Kramp-Karrenbauer has thrown in the towel -- throwing Chancellor Angela Merkel's succession plans into disarray.

Kramp-Karrenbauer, best known by her initials "AKK", unexpectedly announced she was standing down as CDU leader and would not seek to become the centre-right party's new chancellor in a general election slated for next year.

It's a swift fall from grace for AKK, whose spell in the spotlight was marred by high-profile blunders and weak showings by the CDU in regional polls.

A political fiasco in the small state of Thuringia last week cast further doubt on her leadership skills and ultimately proved the final blow.

Not only did AKK fail to persuade rebellious CDU lawmakers against siding with the far right in a key vote there, she could not get them to back snap polls afterwards in the face of nationwide outrage.

Merkel had to weigh in from South Africa to condemn the vote as "unforgivable" -- breaking an unwritten rule not to comment on domestic rows during trips abroad.

Even before the Thuringia debacle, critics had long argued that AKK, who is also defence minister, had not lived up to expectations.

"She acted and maneuvred in such clumsy ways that she must have realised herself: this can't go on," the centre-left Tagesspiegel wrote.

It had all started so well for the 57-year-old.

A popular politician in her tiny home state of Saarland, the Catholic mum-of-three was catapulted into the big league in early 2018 when Merkel tapped her to become the party's number two as general secretary.

The move was read as a sign that the veteran chancellor was preparing her exit and AKK, dubbed "mini Merkel" by German media, was the chosen heir to continue her centrist policies.

When Merkel announced she was stepping down as party chief after 18 years and would not seek reelection when her fourth term ends in 2021, it was her protegee who took the reigns of the CDU in December 2018.

But AKK had to fend off an unexpectedly strong challenge from the ambitious Friedrich Merz, who is favoured by the CDU's most conservative wing.

AKK initially sought to carve out her own profile in a party thirsty for change after years of Merkel's moderate course in a loveless coalition with the centre-left Social Democrats.

She notably championed a tougher stance on asylum seekers and floated the idea of reintroducing compulsory military service. She also spoke out against gay marriage.

But Merkel's decision to abandon the party leadership while staying on as chancellor made it difficult for AKK to impose her authority.

In announcing her departure as CDU leader on Friday, a party source quoted AKK saying: "It's clear that the party presidency and the chancellorship need to be in the same hands."

AKK was badly weakened by a string of bruising election results, particularly in eastern Germany's former communist states, where the CDU bled support to the anti-immigrant AfD.

Her rival Merz aims to woo them back by shifting the party to the right.

Several blunders further eroded confidence in her ability to turn the tide on the CDU's woes.

A transgender bathroom joke backfired badly, while an ill-judged retort to a YouTube star's criticism of the government's climate policies left her looking out of touch.

"Of course I would avoid a few mistakes here and there, perhaps respond differently to a certain video," Kramp-Karrenbauer said late last year.

Born into a large, Catholic family, AKK grew up a self-described nerd who adored reading and never dared to cut class.

She married Helmut Karrenbauer in 1984, the same year she started her studies in law and political science.

The couple have three children and AKK has paid tribute to her husband for being a stay-at-home father so she could climb the ladder.

A keen participant in her region's annual carnival celebrations, AKK is famous for performing a comedy routine dressed up a "cleaning lady Gretel" who pokes fun at the political bigwigs in Berlin.

She does not plan to reprise the role at next week's festivities.