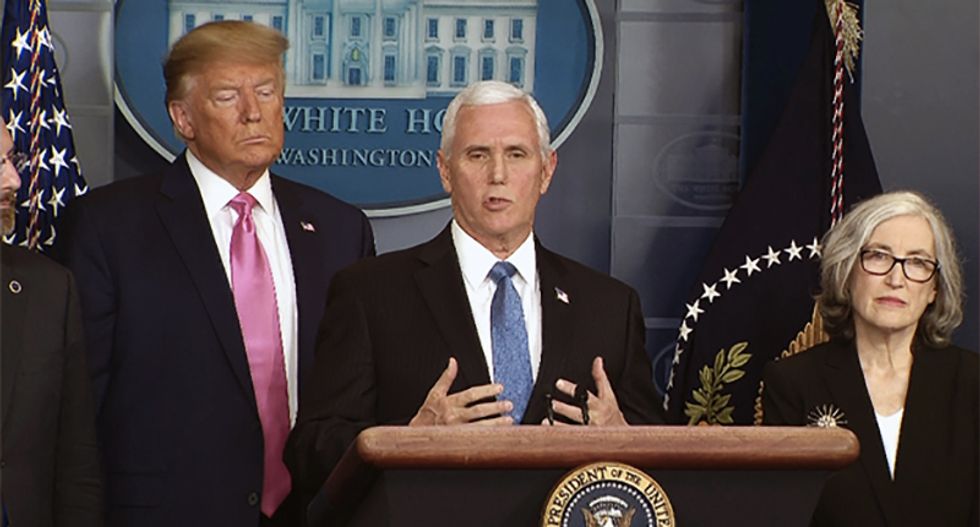 According to a report from the Daily Beast, Donald Trump is directing members of his coronavirus task force to make sure they hammer at the Democrats when discussing progress the administration is making to combat the spread on the growing pandemic.

On Friday night, at a rally in South Carolina, Trump set the tone by pointedly blaming the Democrats and telling rallygoers, "The Democrats are politicizing the coronavirus. They're politicizing it. They don't have any clue," while also tying the growing health crisis to building his wall, by stating, "Border security is also health security.”

As the Beast reports, "According to three sources who have independently discussed the crisis with him in the last three weeks, Trump has appeared preoccupied with his theory that liberals and the press were attempting to use coronavirus to make him 'look bad' prior to the November election."

According to the report, talking points have been distributed to Republicans who might be asked about the coronavirus developments to make sure they drag the Democrats into it -- saying any comments they make about the administration's efforts is "politicizing" the issue.

The report notes that those instructions have also been relayed to members of the task force working under Vice President Mike Pence, with the Beast reporting, "... those talking points have been pushed as a primary message point for surrogates to emphasize. According to a person familiar with the strategy, the White House has encouraged members of the president’s coronavirus task force to denounce Democrats for attempting to politicize the crisis during media appearances this week."

"On Thursday, the Republican National Committee blasted out a message to surrogates and allies promoting a Fox clip of GOP chairwoman Ronna McDaniel declaring that Democrats are 'politicizing this,' and accused them of wanting 'porous borders.' Meanwhile, she said, Trump is 'taking this by the horns like he always does. He’s going to make sure the American people are safe,'" the report continues, adding, "That same day, the Trump White House sent out a talking-points memo to its own media surrogates about how 'while the President is leading aggressive response and preparation efforts, many in the media remain focused on attacking him at every turn.'"