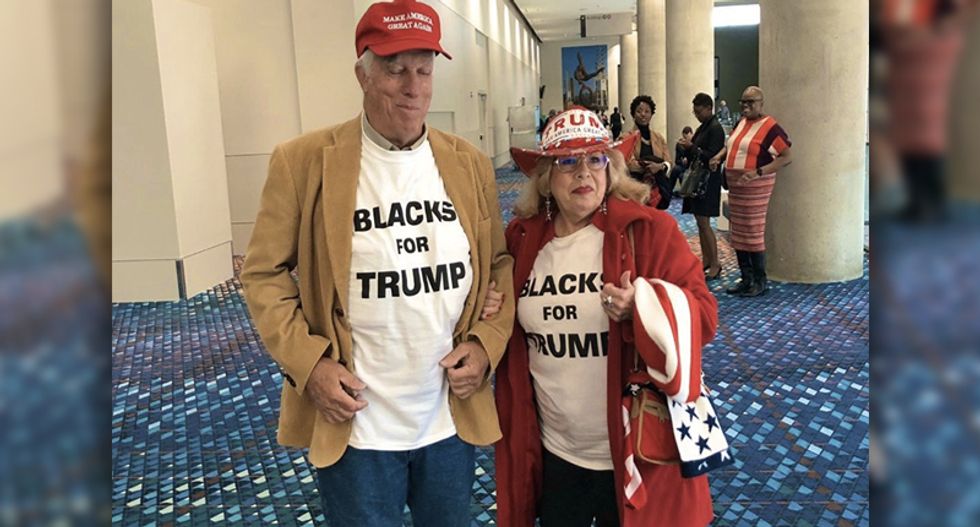 President Donald Trump knows very well how to motivate his audience. They love a good chant. MAGA audiences go nuts for free hats, shirts and signs. They get excited when they hear the president bash whatever Democrat he's come up with a pitifully lame nickname he invented. But when it comes to courting Black voters, Trump has made it clear, he has no idea where to begin.

Washington Post reporter Phil Bump noted that one of Trump's favorite things to do to appeal to Black voters is to cite unemployment numbers he had little influence over causing.

Later Trump used Janiyah Davis as the poster-child for school vouchers. Davis was hoping to get an Opportunity Scholarship but wasn't able to. Trump used the girl and her mother to show she still could get the money. Only, none of Trump's programs or future programs were doing it. Secretary of Education Betsy DeVos personally decided to fund the scholarship.

"Davis and her mother were clearly happy and understandably so," wrote Bump. "For Trump, it was a direct representation of what he thought he was doing for Black Americans broadly: giving them something that they wanted. In the abstract, that’s jobs, at least as measured by the unemployment rate."

Other times, Trump brags about his reform of the criminal justice system as being a specific benefit to the Black community. In reality, only about two dozen people have been released under Trump's legislation and Attorney General Bill Barr is fighting to keep others behind bars.

In his Super Bowl ad, Trump celebrated Alice Johnson, a woman who was given a life sentence for being involved in a drug-trafficking organization. Trump gave her clemency after Kim Kardashian visited the White House and lobbied on her behalf. His criminal justice reform did nothing to get Johson out of prison.

Twitter responded to the ad by saying that it was clear Trump was trying to give cover to suburban white women who have been concerned about Trump's racism.

"Supporters of Trump’s have been even more directly transactional, holding events at which black attendees have the chance to win envelopes full of cash," Bump explained. Black voters don't work that way.

"In broad strokes, the effort to woo black voters makes some sense," wrote Bump. "More than 1-in-5 Democratic votes for president in recent years have come from black voters. If Republicans can peel away even a few of those votes or — as the campaign was reported to have attempted in 2016 — get them to stay home, GOP electoral prospects improve."

For Black communities, politicians who come around a few months before election day are common. Some attend church services begging for endorsements from pastors

"It’s possible that Trump sees economic issues as being the sort of core issue for Black people that opposing liberals is to his own voters," Bump speculated. "It’s also possible that he simply reverts to transactionalism because he doesn’t have a sense of how else to approach the subject. A recent New York Times report about Trump’s outreach to Black voters suggests that it’s more the former than the latter. [Jared] Kushner, for example, has been 'advising Mr. Trump that black voters can be converted into supporters if they are simply educated on his policies.'"

While Trump loses support from angry farmers and ranchers or disappointed Democrats who flipped from Barack Obama to Trump in 2016, Kushner knows that Trump can't afford to lose anyone else if he doesn't intend to gain any new voters.

Black Americans know better, though. Bump showed a slate of polls that reveal they overwhelmingly believe Trump is a racist and that he's made race an even bigger problem in the country than it was before. Most understand that Obama was the one who got the economy back on track after the recession.

While a lower percentage of Black Americans wish Obama had done more for them, they agree he did good things for them. By contrast, over 75 percent of Black voters believe Trump has done anything good for them.

As is often quoted, legendary writer Maya Angelou said, “When people show you who they are, believe them the first time." Black Americans saw Trump demand the death penalty for the innocent Central Park Five teens, they saw his crusade to declare the first Black president illegitimate, and they saw him make excuses for "very fine" Nazis and Klansmen in Charlotte.

"Fundamentally, though, the issue lies elsewhere," closed Bump. "The president understands intuitively how to appeal to the white working-class voters that power his political support. He has no similar sense of how to appeal to African Americans. So he tries giving black people the things he thinks they want, expecting that this will be enough to do the trick. By now he should have learned that it won’t."

After it was announced on Thursday that the House passed the Respect for Marriage Act, protecting the rights of same-sex and interracial marriages, Rep. Vicky Hartzler (R-MO) made a tearful plea to her colleagues to help her in pushing back against it.

In a statement made on the House floor, Hartzler squared off against the Speaker saying "I'll tell you my priority; protect religious liberty, protect people of faith, and protect Americans who believe in the true meaning of marriage."