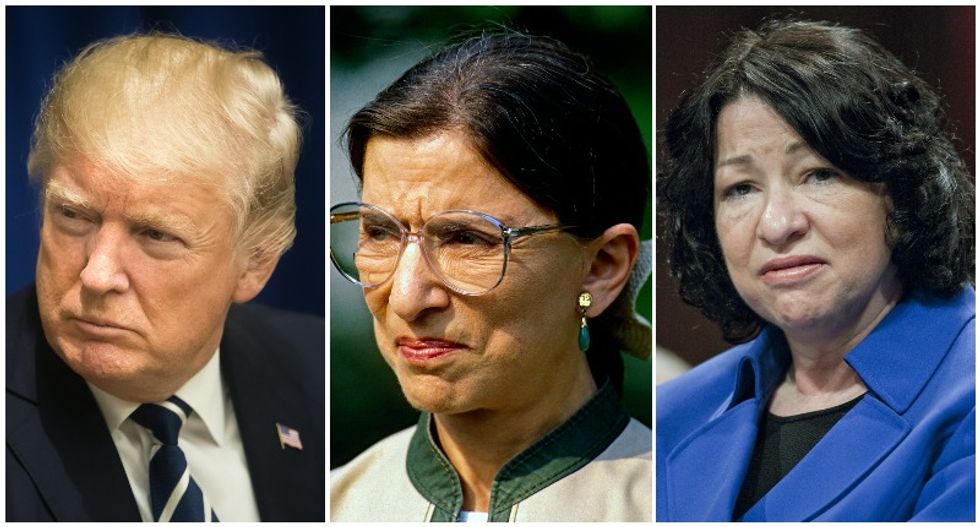 This Monday, President Trump attacked liberal Supreme Court Justices Sonia Sotomayor and Justice Ruth Bader and demanded that they recuse themselves from any cases that involve him.

“‘Sotomayor accuses GOP appointed Justices of being biased in favor of Trump,’” Trump tweeted while citing Laura Ingraham of Fox News. “This is a terrible thing to say. Trying to ‘shame’ some into voting her way? She never criticized Justice Ginsberg when she called me a ‘faker’. Both should recuse themselves on all Trump, or Trump related, matters!”

“While ‘elections have consequences,’” he added, “I only ask for fairness, especially when it comes to decisions made by the United States Supreme Court!”

But many on Twitter saw the rant as just another example of Trump's inherent hypocrisy, with some citing a recent story chronicling Justice Clarence Thomas's wife's advocacy on Trump's behalf.

Actually the justice who most needs to recuse from cases involving Trump is Clarence Thomas, whose wife is a paid M… https://t.co/MuSH2LvHKv
— Brian Fallon (@Brian Fallon) 1582604822.0

Clarence Thomas’s wife is working with Trump to purge disloyal staff. Neil Gorsuch only has a job because Trump an… https://t.co/cGpaJOIyRw
— Keith Boykin (@Keith Boykin) 1582640186.0

Which means his appointees should recuse from any case involving the country. #SupremeCourt https://t.co/TdrDb8u1hS
— Laurie David (@Laurie David) 1582641111.0

So does this mean Clarence Thomas should also recuse himself since his wife is leading the purge of disloyal Trump… https://t.co/N7EAxxagIr
— Justin Baragona (@Justin Baragona) 1582640234.0

So let me understand the thinking here: what Trump is saying is that conservative Justices who supported him should… https://t.co/QH7lgp7SF8
— Hans Kristensen (@Hans Kristensen) 1582644244.0

Which means his appointees should recuse from any case involving the country. #SupremeCourt https://t.co/TdrDb8u1hS
— Laurie David (@Laurie David) 1582641111.0