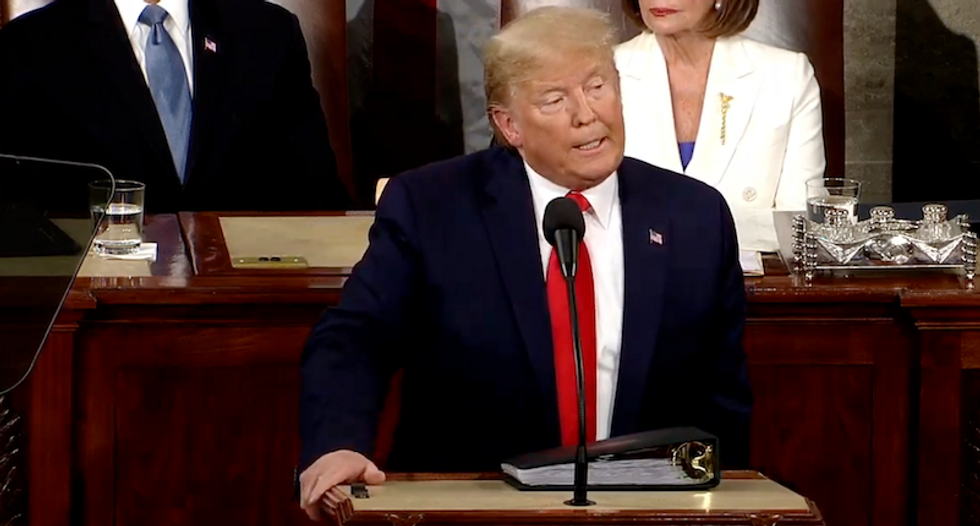 Amid the ripping paper and misbegotten medals, Trump’s State of the Union address promised nationalism with a distinctly Christian bent.

Trump wants to steal $5 billion from public schools (which he decried as “failing government schools”) to give to private, i.e., Christian, schools. Trump wants to roll back reproductive rights and ban abortion. But more than anything, Trump wants to weaponize religious freedom. If he is successful there, it will be a win for his war against abortion and public schools too. He said:

My administration is also defending religious liberty, and that includes the constitutional right to pray in public schools. In America, we don’t punish prayer. We don’t tear down crosses. We don’t ban symbols of faith. We don’t muzzle preachers and pastors. In America, we celebrate faith, we cherish religion, we lift our voices in prayer, and we raise our sights to the Glory of God.

The Constitution already protects students’ right to pray in public schools. What Trump actually wants is to use the machinery of the state to impose religion on students.

The allusion to tearing down crosses is a nod to the Supreme Court’s recent decision to allow the 40-ft tall Bladensburg cross to remain on government land and be maintained at government expense. Justice Alito’s opinion was full of irreconcilable contradictions and it bought in to the idea that curing First Amendment violations would show “hostility toward religion.” Until last summer, that was a claim that the Supreme Court had repeatedly rejected going all the way back to its very first state-church decision.

The placement of this passage, with its Christian nationalist dog whistles, belies its true meaning. It came immediately after he touted the Federalist Society's “pipeline” set up to get conservative lawyers—many patently unqualified—lifetime appointments as federal judges:

“Working with Mitch McConnell — thank you, Mitch — and his colleagues in the Senate, we have recommended 180 new judges to uphold our Constitution as written. This includes Neil Gorsuch and Brett Kavanaugh.”

Those aren’t Trump judges, they’re McConnell/Federalist judges. And they're the ones who will make Trump’s religious freedom subtext a legal reality.

It's also worth noting that immediately following this nod to Christian nationalism Trump claimed to be “defending national security and combating radical Islamic terrorism.”

And, in fact, the speech may have been edited to drop an even more blatant call to Christian Nationalism. Politico's transcript includes the following line (emphases mine):

In reaffirming our heritage as a free nation, we must remember that America has always been a Christian nation.

In reaffirming our heritage as a free Nation, we must remember that America has always been a frontier nation.

It's entirely possible that the speech wasn't deliberately edited; that Trump, who's famous for ad-libbing, simply misread or decided to deviate from the speech as written, but it's meaningful that the speech appears to have been toned down.

Even so, the message is out in the open: These judges will make Christian nationalism the law. They will redefine the Constitution so that it creates two classes of people: conservative Christians and everyone else. That is and has been the goal of Christian nationalism—to codify Christian privilege and elevate Christians to a special, favored class. All others will be second-class citizens. As Chrissy Stroop noted in her Religion Dispatches piece on the SOTU, these ideas have been mainstreamed due to the influence of the radical Christian Reconstructionist movement.

Right now, Christian nationalists are raging against the dying of their privilege. Trump’s State of the Union encapsulated this rage. And, as America nears the tipping point at which conservative Christianity’s power and privilege are reduced to equality for all, the Christian nationalist myths will be spouted more often and more loudly. But the end is near for this movement. That is the true state of our union.