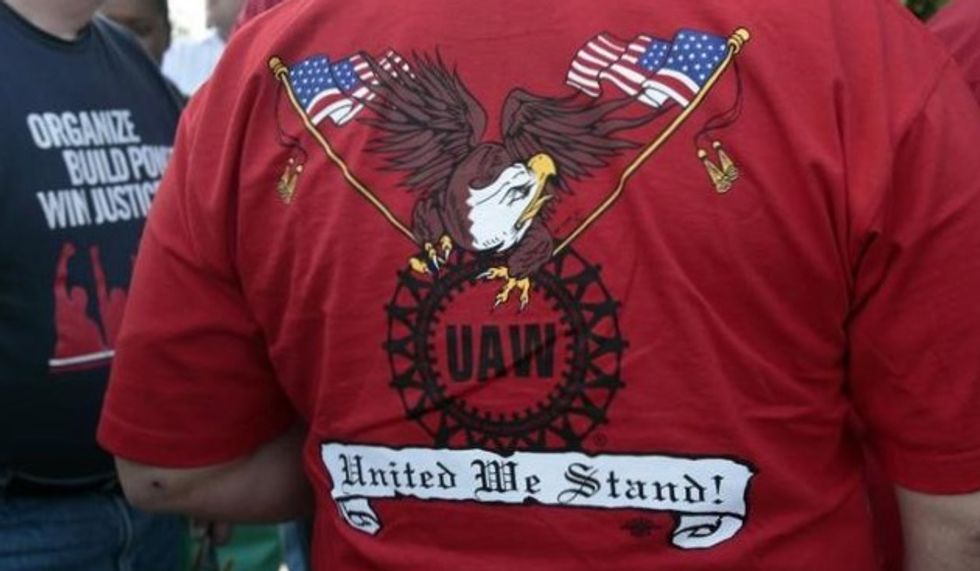 FILE PHOTO - A United Auto Workers union member wears a shirt with 'UAW United We Stand' on it during a ceremony where members of UAW Local 600 unfurled a banner to commemorate the 75th anniversary of the historic "Battle of the OverPass" in Dearborn, Michigan, U.S. May 25, 2012. REUTERS/Rebecca Cook/File Photo

"Trump claimed to be 'pro-worker'... If that was anything other than his usual phony rhetoric, Trump will push the Senate to pass the bill and sign it."

Union leaders and labor rights advocates applauded the Democrat-controlled U.S. House for passing landmark legislation Thursday night that supporters have called one of the most notable efforts to expand workers' rights in several decades.

"This is an important step to leveling the playing field for working people."

House lawmakers voted mostly along party lines to approve the Protecting the Right to Organize (PRO) Act (H.R.2474), which passed 224–194 with 12 members not voting. See the roll call vote here.

"This is a watershed moment for the labor movement and shows what working people can accomplish when we come together to demand a voice on the job and a seat at the table," said Lee Saunders, president of AFSCME, the nation's largest trade union of public employees.

"Make no mistake, this is the most significant step Congress has taken to strengthen labor laws in the United States in 85 years and a win for workers everywhere," said AFL-CIO president Richard Trumka, declaring the measure "the labor movement's number one legislative priority this year."

The PRO Act now faces an uphill battle in the legislative "graveyard" of GOP Senate Majority Leader Mitch McConnell (Ky.). Following the vote, Charles Idelson of National Nurses United (NNU) noted President Donald Trump—who repeatedly claims to be a friend to workers—now has an opportunity to prove it.

NNU, the largest nurses union in the country, celebrated the House's passage of the PRO Act as a "victory for workers" and highlighted how the bill aims to protect those who take steps to form or join a union.

The bill, as the Washington Post reported, "would amend some of the country's decades-old labor laws to give workers more power during disputes at work, add penalties for companies that retaliate against workers who organize, and grant some hundreds of thousands of workers collective-bargaining rights they don't currently have. It would also weaken 'right-to-work' laws in 27 states that allow employees to forgo participating in and paying dues to unions."

The legislation would also empower the National Labor Relations Board to fine companies up to $50,000 per violation, "award workers' compensation for the damages they experience when they are retaliated against, not just back pay and reinstatement, as they are currently entitled to," and "allow more people currently classified as contractors to be given the status of employees for the purposes of union organizing," the Post noted.

AFL-CIO's Trumka called the PRO Act "long overdue." He explained that "America's labor laws are no longer an effective means for working people to have our voices heard" and "working people are hungry for a bill that will ensure a process for reaching a first contract once a union is recognized, prevent the misclassification of employees, protect the right to strike, and so much else."

Leaders of some of the country's largest progressive groups argued in an op-ed ahead of the House vote that "passing this legislation will restore working people's voice on the job and fulfill the promise of our democracy to benefit all of us, regardless of income, race or gender. And it's what the people want. More than half of non-union workers would vote to join a union if they could."

This fundamental right has been eroded for decades as employers exploit weaknesses in the current law and influence the government to weaken current protections. Further, employers often interfere with workers' rights to organize, and face no real consequences for doing so. The result has been stagnant wage growth, unsafe workplaces, and rising inequality. The PRO Act will go a long way toward restoring workers' right to join together to bargain for better wages and working conditions by streamlining the process when workers form a union, ensuring that they are successful in negotiating a first agreement, and holding employers accountable when they violate labor law. The PRO Act is an important effort to bring U.S. labor law into the 21st century—giving working people more power to counteract rising corporate power and inequality. The Senate should pass the PRO Act immediately and give working people what they need most: fairness and a voice on the job.

Saunders of AFSCME also urged the Senate "to reject corporate-backed interests pressuring them to kill this bill and stand with workers by defending their right to organize."

As Common Dreams reported Wednesday, the bill is backed by over 60 environmental groups, who sent a letter to the House that said in part: "We need strong, common-sense worker protections like those in the PRO Act to ensure that a sustainable economy reverses rather than reinforces rising inequity. There is no way to build a greener, more inclusive economy without strong, thriving labor unions."

Progressives in the lower chamber have taken to the floor and Twitter in recent days in support of the bill.

Ardent supporters of the measure include the co-chairs of the Congressional Progressive Caucus, Reps. Pramila Jayapal (D-Wash.) and Mark Pocan (D-Wis.).

Meanwhile, seven House Democrats voted against the legislation and five Republicans crossed the aisle to help pass the bill.

In a Twitter thread about those who broke with their parties, former GOP operative Liam Donovan noted that Trumka had "unequivocally said anybody who isn't with labor on the PRO Act is dead to them," referencing a tweet from earlier this week.

As the the AFL-CIO leader tweeted Wednesday: "And to those who would oppose, delay, or derail this legislation—do not ask the labor movement for a dollar or a door knock, we won't be coming."