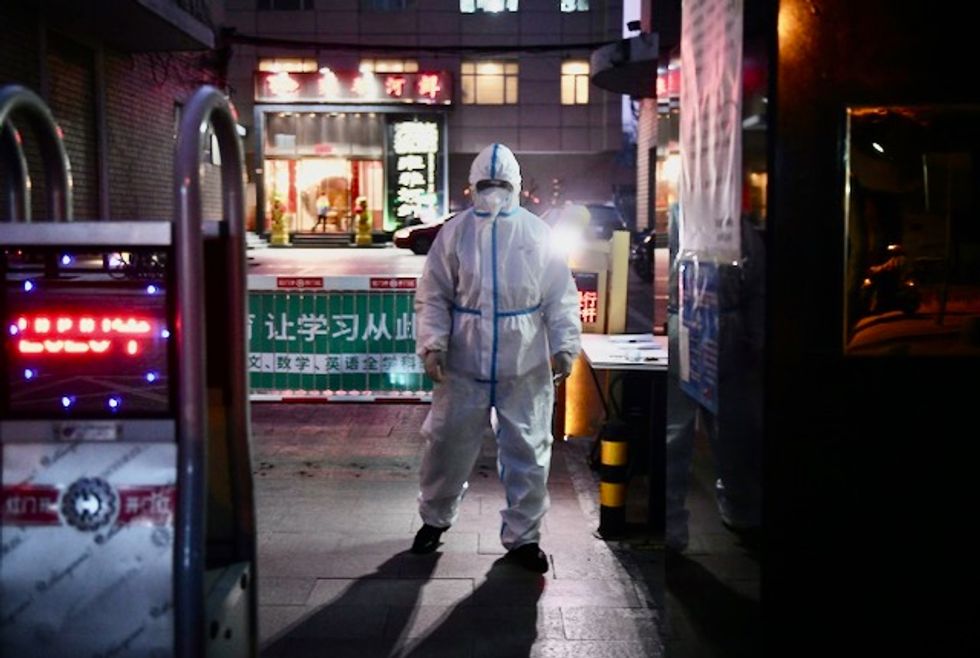 New coronavirus cases surged outside of China on Tuesday, leaving an Iranian deputy minister among the stricken and triggering mass disruption as a top health official warned the world is not prepared for containing the epidemic.

Even as the number of fresh cases declines at the epicentre of the disease in China, there has been a sudden increase in parts of Asia, Europe and the Middle East.

Towns and cities in different parts of the world have been sealed off in an attempt to stop the contagion, while hotels in the Canary Island and Austria were locked down on Tuesday because of suspected cases.

AFP / JEAN-PHILIPPE KSIAZEK Security personnel after sealing an area at the Lyon Perrache train and bus station in France, after the blocking of a bus arriving from Milan, Italy and suspected of carrying the new coronavirus

In Iran, which has reported 15 deaths out of nearly 100 infections, even the country's deputy health minister Iraj Harirchi said he had contracted the virus.

At the World Health Organization (WHO) headquarters in Geneva, Bruce Aylward, who headed an international expert mission to China, hailed measures taken there but told reporters that other nations were "simply not ready" for reining in the outbreak.

"You have to be ready to manage this at a larger scale... and it has to be done fast," Aylward said.

The disease has now reached dozens of countries, with Austria, Croatia and Switzerland the latest additions on Tuesday.

The epidemic's disruption has also grown, with stock markets tumbling around the world, restrictions imposed on travellers and sporting events cancelled.

The WHO, the UN health agency, has called for countries to "prepare for a potential pandemic" -- a term used to describe an epidemic that spreads throughout the world.

Poor countries are particularly at risk, the WHO has warned.

In the Middle East, Iran has emerged as a major hotspot.

The death toll -- the deadliest outside China -- rose to 15 on Tuesday when three more people succumbed to the disease, officially known as COVID-19.

The country has been scrambling to contain the epidemic since last week when it announced its first two deaths in Qom, a centre for Islamic studies and pilgrims that attracts scholars from abroad.

US Secretary of State Mike Pompeo, whose country came to the brink of war with Iran earlier this year, said Washington is deeply concerned Tehran "may have suppressed vital details" about the outbreak there.

Gulf countries announced new measures to cut links with Iran in an attempt to stop the spread.

The United Arab Emirates suspended passenger and cargo flights to Iran, while Bahrain closed schools and nurseries for two weeks. This came after the Gulf states of Kuwait and Bahrain announced additional cases.

South Korean President Moon Jae-in warned that the outbreak was "very grave". His country's death toll rose to 10 and the number of confirmed infections approached 1,000 -- the largest total outside China.

Scores of events, including K-pop concerts, have been cancelled or postponed in the world's 12th-largest economy.

Parliament closed for cleaning on Tuesday after confirmation that a person with the coronavirus had attended a meeting there last week.

More than 80 percent of the infections have been in and around Daegu, South Korea's fourth-largest city.

Nearly 700 people from the quarantined ship have tested positive for the illness so far. Infections have also spiked in Japan, with at least 164 cases including one death.

Italy -- which has reported 10 deaths and more than 300 cases -- has locked down 11 towns. Prime Minister Giuseppe Conte has said the measures could last weeks.

A young man who returned to Croatia from Italy became the first case in the Balkans region.

Upcoming football matches in Italy's Serie A and the Europa League will be played to empty stadiums.

A major rugby match could also be affected. Ireland's government recommended cancellation of next month's Six Nations clash against Italy in Dublin.

And in the United States, which has 57 cases, health authorities significantly escalated the level of threat being conveyed to the public, saying they ultimately expect the new coronavirus to spread more widely there.

"It's not so much a question of if this will happen anymore, but rather more a question of exactly when," said Nancy Messonnier, a senior official with the Centers for Disease Control and Prevention, urging local governments, businesses and schools to develop plans.

"Bit by bit, US investors are seeing the prospects for global growth diminish," said Gregori Volokhine of Meeschaert Financial Services.

Swiss food giant Nestle postponed all business trips until mid-March because of the virus.

In China, though, the epidemic appears to be slowing -- and the country is gingerly returning to business.

More cars are on the streets of Beijing, factories are resuming work, Apple is reopening several stores, and some regions are relaxing traffic restrictions.

But schools remain closed, the capital has a mandatory 14-day quarantine for returning residents, and authorities are keeping about 56 million people in Hubei Province -- the hub of the outbreak -- under lockdown.

Photo: A Chinese security guard wears protective clothing outside a restaurant in Beijing