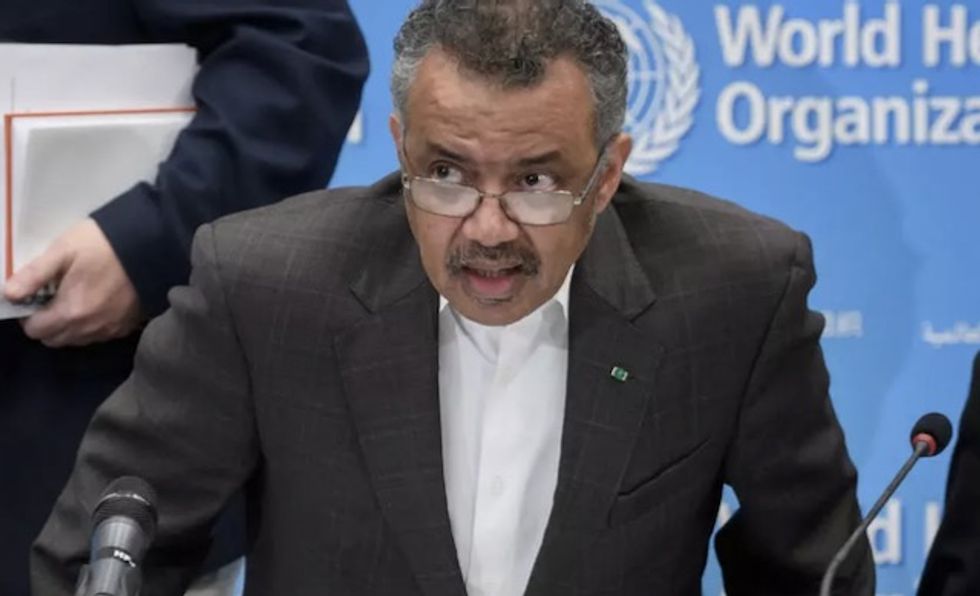 World Health Organization (WHO) Director-General Tedros Adhanom Ghebreyesus arrives for a press conference following a WHO meeting to discuss whether the new coronavirus outbreak constitutes an international health emergency in Geneva, Switzerland on January 30, 2020. © Fabrice Coffrini/AFP

The death toll in China from the new coronavirus epidemic jumped on Wednesday, as the chief of the World Health Organization urged countries to work together against the "grave threat" posed by the outbreak.

The WHO is holding a conference in Geneva on combating the virus, which has killed more than 1,100 people in China and spread to dozens of countries around the world.

WHO chief Tedros Adhanom Ghebreyesus said viruses could have "more powerful consequences than any terrorist action".

Although 99 percent of the infections are in China, where it remains "very much an emergency", it also "holds a very grave threat for the rest of the world", Tedros said at the conference, where the virus was officially named "COVID-19".

The case of a British man who passed on the virus to at least 11 other people -- without having been in China -- has raised fears of a new phase of contagion abroad.

"We have to use the current window of opportunity to hit hard and stand in unison to fight this virus in every corner," Tedros said, warning that a failure to act would lead to far more cases in the future.

WHO sent an advance team to China this week for an international mission to examine the epidemic, where more than 44,000 people have now been infected.

Chinese authorities have locked down millions of people in a number of cities, but another 94 deaths were reported on Wednesday in the hardest-hit province of Hubei, the central province where around 56 million people are under lockdown.

The mortality rate remains relatively low at around 2 percent.

Several governments have banned arrivals from China and major airlines suspended flights in a bid to keep the disease away from their shores.

Most cases overseas have involved people who had been in Wuhan, the quarantined central Chinese city where the virus emerged late last year, or people infected by others who had been at the epicentre.

The Briton caught the virus while attending a conference in Singapore and then passed it on to several compatriots while on holiday in the French Alps, before finally being diagnosed back in Britain.

The 53-year-old said Tuesday he had fully recovered, but remained in isolation in a central London hospital.

"The detection of this small number of cases could be the spark that becomes a bigger fire," Tedros said on Monday.

The biggest cluster of cases outside China is aboard the Diamond Princess cruise ship moored off Japan, where 135 people have been diagnosed.

The ship has been in quarantine since arriving off the Japanese coast early last week after the virus was detected in a former passenger who had disembarked in Hong Kong.

More than 100 people were evacuated from a 35-storey Hong Kong housing block Tuesday after two residents in different apartments tested positive for the virus.

People were forced to leave as health officials in masks and white overalls scrambled to work out whether the virus had spread through the complex of about 3,000 people.

"Of course I'm scared," a 59-year-old resident, who gave her surname as Chan, told AFP.

The United States said Tuesday it had authorised non-essential consulate staff to leave Hong Kong "out of an abundance of caution" linked to the virus.

Servomex/AFP / - Steve Walsh of Britain says he has fully recovered, but he remained in hospital isolation and is believed to have passed on the virus to at least 11 other people -- without having been in China

Chinese authorities dismissed two senior health officials from Hubei and tightened restrictions in the capital Wuhan, forbidding people with fever from visiting hospitals outside of their home districts and sealing off residential compounds.

Local authorities both in Wuhan -- where the virus is thought to have emerged in a market selling wild animals -- and Hubei have faced a torrent of criticism for hiding the extent of the outbreak in early January.

The death of a whistleblowing doctor from Wuhan has sparked calls for political reform in China.

Most deaths and cases are in Hubei.

"The problem of human-to-human transmission has still not been solved in Wuhan," the official Xinhua news agency quoted Zhong Nanshan, a renowned scientist, as saying.

"I believe that with enough venues, enough doctors, better protective gear and our various support teams, the situation in Wuhan should improve quickly, but it is still at a rather difficult stage," he said, forecasting a mid- to late-February peak in the outbreak.

Toward the end of January, Zhong had expected a peak in a week to 10 days.

President Xi Jinping has largely kept out of the public eye since the outbreak spread across the country.

But he emerged on Monday, pictured wearing a mask and having his temperature taken at a hospital in Beijing.

Xi called the situation in Hubei "still very grave" and urged "more decisive measures" to contain the spread of the virus.