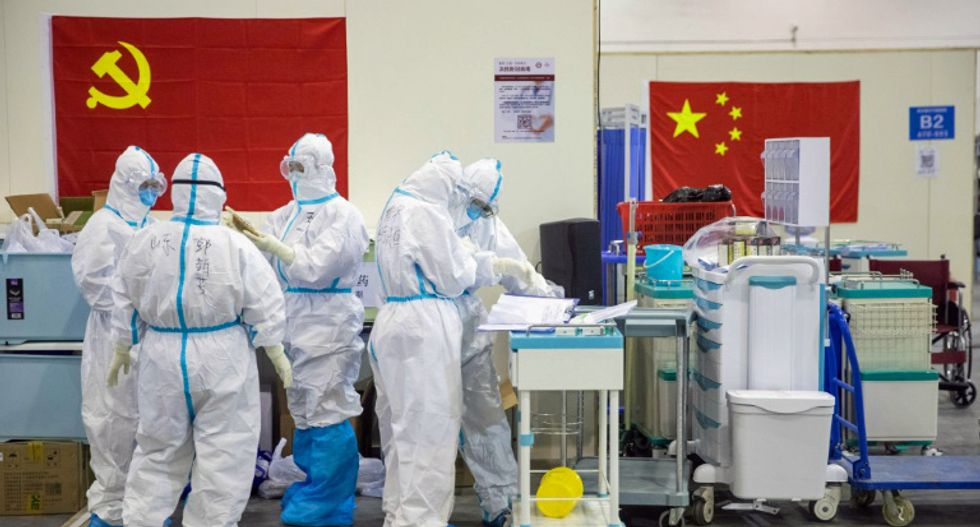 China has placed about 56 million people in hard-hit central Hubei under quarantine, virtually sealing off the province from the rest of the country. AFP / STR.

The death toll from the new coronavirus outbreak rose again on Tuesday but Chinese and international health officials sought to calm global nerves, citing a study showing most cases are mild and warning against excessive measures to contain the epidemic.

Nearly 1,900 people have now died and more than 72,000 others infected by the virus in China, with hundreds more cases in some 25 countries.

The situation remains dire at the epicentre, with the director of a hospital in the central city of Wuhan becoming the seventh medical worker to succumb to the COVID-19 illness.

But Chinese officials released a study showing most patients have mild cases of the illness, and World Health Organization officials said the mortality rate was relatively low.

The epidemic has triggered panic-buying in Singapore and Hong Kong, concerns about cruise-ship travel and the postponement of trade fairs, sports competitions and cultural events in China and abroad.

The outbreak is threatening to put a dent in the global economy, with China paralysed by vast quarantine measures and major firms such as iPhone maker Apple, mining giant BHP and Air Canada warning it could damage bottom lines.

Several countries have banned travellers from China and major airlines have suspended flights.

Russia on Tuesday said no Chinese citizens would be allowed to enter its territory from February 20.

Authorities have placed about 56 million people in hard-hit central Hubei and its capital Wuhan under an unprecedented lockdown.

The city was carrying out a "very good public health practice" with door-to-door and active surveillance, said Michael Ryan, head of WHO's health emergencies programme.

Other cities far from the epicentre have restricted the movements of residents, with a 14-day self-quarantine for people returning to Beijing.

The official death toll in China hit 1,868 Tuesday after another 98 people died -- most in Hubei and Wuhan, where the virus emerged in December.

Liu Zhiming, the director of Wuchang Hospital in Wuhan, became its latest victim, sparking an outpouring of grief online.

Earlier this month, the death of Wuhan doctor Li Wenliang -- who had been punished by authorities for sounding the alarm about the virus in late December -- triggered anger and calls for political reforms on social media.

Official figures, meanwhile, showed there were nearly 1,900 new COVID-19 cases. New infections have been falling in the rest of the country for the past two weeks.

WHO chief Tedros Adhanom Ghebreyesus cautioned that it was too early to tell if the decline would continue.

A study among 72,000 confirmed, suspected and clinically diagnosed cases showed that 81 percent of patients had only mild infections.

The study released by China's Centre for Disease Control and Prevention also showed the death rate stood at 2.3 percent, falling below one percent for people in their 30s and 40s.

But it is higher than the mortality rate for the seasonal flu, at around 0.1 percent in the United States.

Ryan said the outbreak was "very serious" and could grow, but stressed that outside Hubei the epidemic was "affecting a very, very tiny, tiny proportion of people".

There have been some 900 cases around the world, with five deaths in France, Japan, the Philippines, Taiwan and Hong Kong.

Another 88 people tested positive for the virus on the quarantined Diamond Prince cruise ship off Yokohama in Japan, raising the number of those infections to 542.

The US repatriated more than 300 American passengers on Monday and Britain became the latest country to offer its citizens a way off the boat after similar plans by Canada, Australia, Hong Kong and South Korea.

And around 500 passengers will leave the ship on Wednesday after testing negative for the virus.

Attention was also turning to the Westerdam, a cruise ship in Cambodia, where many of the 2,200 people aboard were allowed to disembark after all initially received a clean bill of health.

An 83-year-old American woman was later diagnosed with the virus in Malaysia, raising concerns that other passengers might have been infected before flying to other countries.

The WHO rejected the suggestion that all cruises should be halted after hundreds of passengers were infected on one vessel off Japan.

"Measures should be taken proportional to the situation. Blanket measures may not help," the WHO's Tedros said.