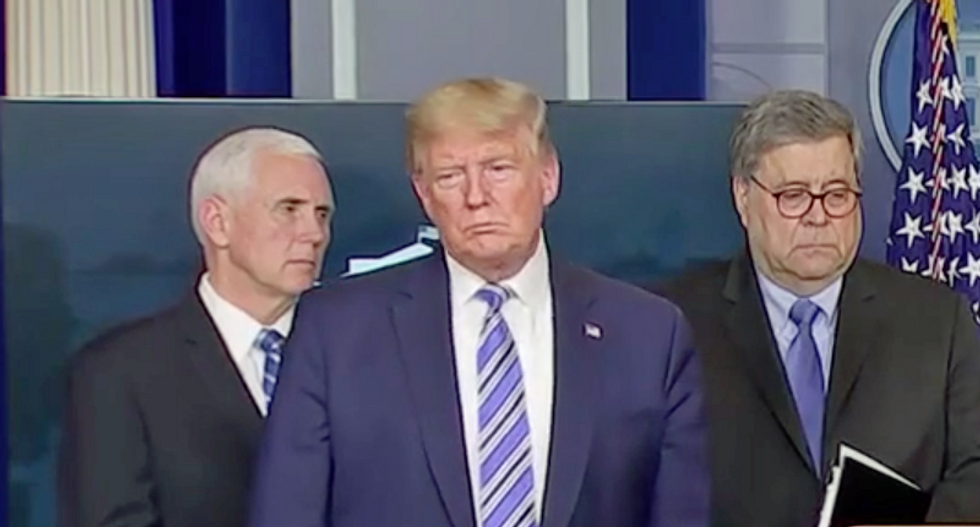 "Trump and allied Republicans fear that he will be hampered in his reelection with a bad economy. And that, in turn, matters more than anything else: science, hospitals, social cohesion and, now, human life."

Worried that the tumultuous stock market and soaring unemployment are imperiling his chances of reelection in November, President Donald Trump is defying the internal and public pleas of his administration's own health experts and moving toward lifting federal coronavirus prevention guidelines in an effort to jumpstart the flagging economy.

"If we let up now, we can be virtually certain that healthcare will be overwhelmed in many if not all parts of the country. This is the view of every well-informed infectious epidemiologist I know of."

That's according to the Washington Post, which reported Monday that Dr. Anthony Fauci—the nation's top infectious disease effort—is privately warning White House officials not to listen to growing calls from right-wing economists, Fox News pundits, business leaders, and Republican politicians to loosen federal guidelines aimed at slowing the spread of COVID-19, which as officially infected at least 43,000 people and killed more than 530 in the United States.

"Trump is fixated on the economy—alarmed by the effects of the coronavirus so far and concerned about the impact of long-term contraction and surging unemployment on his reelection chances in November," the Post reported, citing anonymous people familiar with the president's internal discussions.

"Though restrictions on restaurants and other business have been set by state governments," the Post noted, "the president could influence practices if he changed the federal government's guidelines about social distancing and business closures."

During a press briefing on Monday, Trump confirmed that he is leaning toward lifting federal guidelines urging people to stay at home as much as possible—while admitting that medical professionals within his administration have not endorsed the idea.

The president also repeated his claim—first made in an all-caps tweet Sunday night—that economic troubles caused by coronavirus prevention measures could outweigh the human costs of the virus itself.

"The doctors, if it was up to the doctors, they'd say 'let's shut down the entire world,'" Trump told reporters. Asked if Fauci, who did not attend Monday's briefing, agrees with his push to lift federal guidelines, Trump replied, "He doesn't not agree."

"We'll be back in business as a country pretty soon," Trump said. "You'll be hearing about that also pretty soon."

Trump's push to lift social distancing guidelines come as health experts, including the president's own Surgeon General, are warning that the coronavirus threat is intensifying, not subsiding. On Monday alone, the U.S. reported more than 100 coronavirus deaths nationwide.

"I want America to understand this week, it's going to get bad," Surgeon General Jerome Adams warned Monday morning. "Right now, there are not enough people out there who are taking this seriously... Everyone needs to act as if they have the virus right now. So, test or no test, we need you to understand you could be spreading it to someone else. Or you could be getting it from someone else. Stay at home."

"All signs point to the crisis getting worse—and the man in charge is putting his own political interests before the lives of Americans."

According to the Post, one option the Trump administration is considering is "a gradual scaling back of current restrictions, where people younger than 40 who are healthy go back to work on a certain date, followed by people ages 40 to 50."

Marc Lipsitch, an epidemiology professor at the Harvard T.H. Chan School of Public Health and director of Harvard's Center for Communicable Disease Dynamics, told the Post that lifting federal guidelines at this moment could have disastrous consequences for public health.

"Now is the time to tighten restrictions on contacts that could transmit the virus, not loosen them," Lipsitch said. "If we let up now, we can be virtually certain that healthcare will be overwhelmed in many if not all parts of the country. This is the view of every well-informed infectious epidemiologist I know of."

As Vox's Aaron Rupar wrote late Monday, "Trump's sudden swing from calling for a 15-day day crackdown, to doubting the science it's based on less than half-way through, is emblematic of his reckless approach to combating the coronavirus."

"All signs point to the crisis getting worse," Rupar added, "and the man in charge is putting his own political interests before the lives of Americans."