Allies back Putin as critics denounce 'president for life' plan 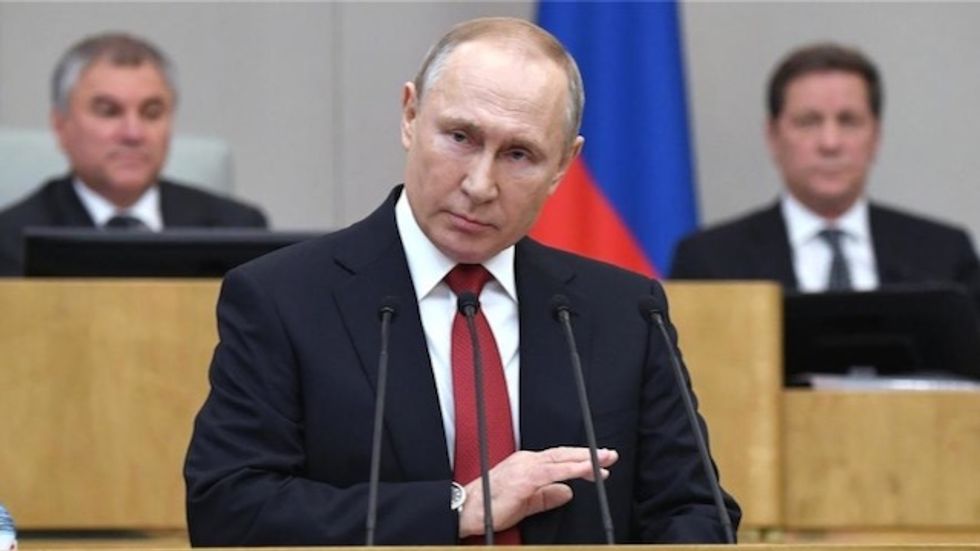 Supporters celebrated and critics called for protests on Wednesday as the prospect sunk in of Russian President Vladimir Putin staying in power until 2036.

Lawmakers in the lower house State Duma voted Wednesday to give final approval to a package of constitutional amendments introduced by Putin -- including a last-minute addition to "reset" his presidential terms.

The vote follows months of speculation about Putin's political future after he shocked the Russian establishment by announcing the reforms in January.

Kremlin allies lined up to praise the amendments, saying Putin was the kind of stabilizing figure that Russia needs.

"A president who is barred from being elected for another term cannot be a strong figure," said Moscow mayor Sergei Sobyanin, a loyal Putin ally.

Limiting his ability to run would be "a destabilizing factor for both domestic and foreign policies," he added.

State Duma speaker Vyacheslav Volodin said the constitutional changes would "strengthen our country" and pave the way for Russia's future.

The amendments must now be approved by the upper house Federation Council -- which like the Duma is packed with Putin loyalists -- and in a public vote planned for April 22.

Federation Council speaker Valentina Matviyenko pre-empted criticism, saying that if Putin does run in 2024, "only citizens will decide whether they support the president or not".

The package Putin announced in January includes a slew of political and social reforms. On Tuesday, an addition was made to restart the clock on Putin's time in the Kremlin once the amendments are adopted.

Putin, 67, backed the addition, though he said it would have to be approved by Russia's Constitutional Court.

"We have had enough of revolutions," Putin said in a rare address to the Duma on Tuesday.

This would allow him to run again in 2024 and 2030, potentially allowing Putin -- first elected in 2000 -- to rule longer than Soviet leader Joseph Stalin.

The proposal sparked a fierce backlash from critics, including opposition leader Alexei Navalny, who accused Putin of seeking to become "president for life".

Dozens of demonstrators assembled near the Kremlin after Tuesday's vote to voice their frustration.

"The person who brought Russia into chaos and disaster could remain in power for the rest of his life... what could be worse?" activist Alexei Minyailo told AFP at the protest.

"Putin until 2036, it's just unthinkable," said Ilya Azar, a journalist and activist who organised Tuesday's protest.

Russia's opposition has called for mass demonstrations against the proposals, including one in Moscow on Friday, despite a ban by local authorities on gatherings of more than 5,000 people over coronavirus fears.

Political analyst Alexei Makarkin said the proposals could trigger a wave of anti-government action, like in 2011-2012 when tens of thousands took to the streets against Putin's return to the Kremlin following four years as prime minister.

"We do not know when this trigger will be pulled," he said.