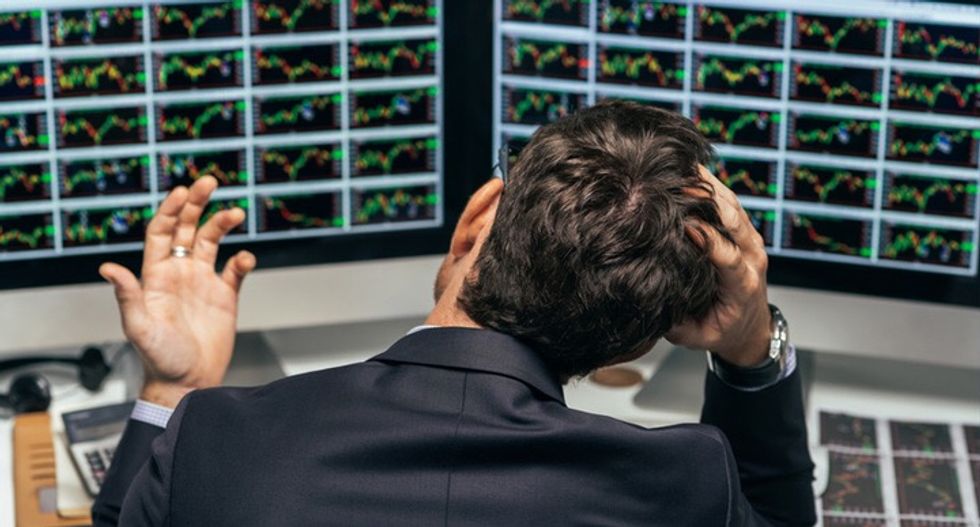 Most Asian markets rose for a second day Tuesday following a blockbuster surge on Wall Street fuelled by hopes for a concerted global response to the coronavirus.

Pledges of action from central banks around the world and a planned conference call between Group of Seven financial chiefs provided a much-needed boost to markets after last week's hammering.

The positive sentiment filtered through to oil markets, where dealers are betting on major producers cutting output to address tumbling demand.

However, earlier gains were pared as investors fret over the effectiveness of monetary policy in the face of the virus, which continues to spread, with the US death toll jumping and the World Health Organization warning the world was in "uncharted territory".

The disease has now killed more than 3,100 people and infected more than 91,000, though China -- where it started -- on Tuesday reported its lowest number of new cases in six weeks.

Shanghai and Sydney both rose 0.7 percent, while Seoul put on 0.6 percent.

Singapore and Mumbai edged up 0.3 percent, with Taipei and Manila gaining more than one percent, and Wellington, Bangkok and Jakarta more than two percent.

Tokyo, however, fell 1.2 percent, and Hong Kong was marginally lower.

In early trade, London and Paris each rose 1.5 percent, while Frankfurt added 1.4 percent.

"One feels... that the newly found optimism sweeping the markets has a fragile foundation," said Jeffrey Halley at OANDA. "We have not seen the end of 'peak gyration' in markets yet."

Traders were given a strong lead after Wall Street enjoyed its best day in more than a year as the Dow soared more than five percent, while the S&P 500 and Nasdaq piled on around 4.5 percent.

After last week's rout, investors returned to buying as central banks from the US, Japan and Europe said they were ready to provide support with monetary easing such as interest rate cuts and cash injections to financial markets.

The US Treasury also announced that Secretary Steven Mnuchin and Federal Reserve chief Jerome Powell will lead a conference call with their G7 counterparts later Tuesday on how to respond to the virus.

On Tuesday, Australia cut borrowing costs to a record low and indicated it is ready to provide more help, making it the first major economy to take such measures.

Donald Trump jumped on the cut, using it to attack the Federal Reserve and renew his call for a similar move at home, saying: "Jerome Powell led Federal Reserve has called it wrong from day one. Sad!"

AxiCorp's Stephen Innes said the conference call was a "good sign of potential action to come and should bring some stability to markets".

"And it would suggest we're moving beyond verbal intervention, as global policymakers want to get in front of the virus's economic carnage through the framework of policy action."

He added that central banks had the power to stop massive sell-offs such as last week's but "the policy shock and awe impulse needs to be delivered quickly to have the highest market impact".

Still, National Australia Bank analyst Ray Attrill warned about how far such action could help during this crisis.

"An impending round of fresh central bank easing is not going to make COVID-19 go away," he said.

"Indeed the more draconian and successful efforts at containing the spread of the virus are worldwide, the bigger will be the negative economic consequences. But this thought is playing second fiddle so far this week to the prospect of yet more central bank largesse."

The outbreak has already impacted economies, with an index of Chinese factory activity falling to a record low last month, while a US survey of manufacturers came in below forecast, with expectations of worse to come.

The OECD said global economic growth could come in at its slowest rate since the financial crisis.

However, with demand for crude tipped to take a battering -- particularly from crucial consumer China -- OPEC will hold an extraordinary meeting Thursday with other producers, led by Russia, to weigh its response.

Hopes for an output cut sent crude prices soaring Monday, and both contracts extended gains in Asia by rising more than one percent.