Can coronavirus spread through food? Can anti-inflammatories like ibuprofen make it worse? Coronavirus claims checked by experts 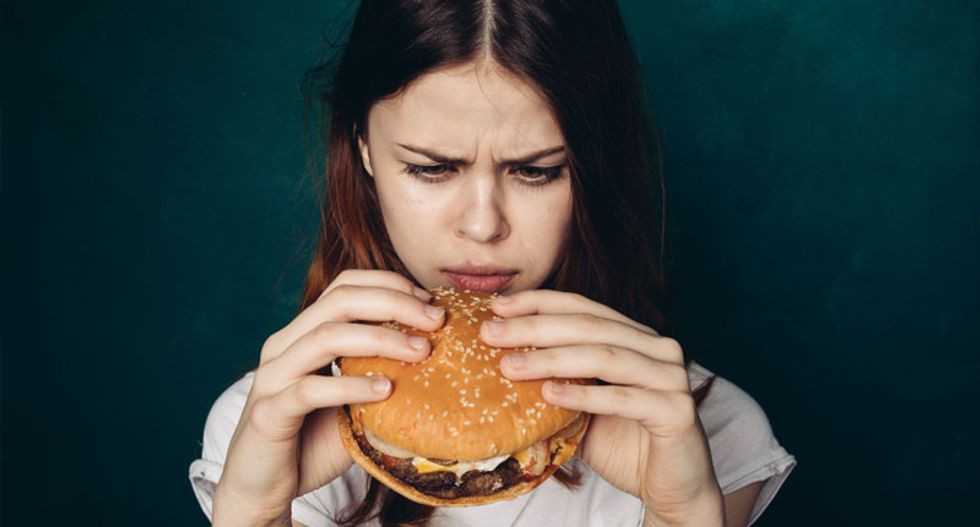 Editor’s note: Here are some of the top coronavirus and COVID-19 claims our readers said they’d like to see tested against the research evidence. We asked these public health and infectious disease experts to explain.

1. Is herd immunity a good strategy?

Herd immunity is not part of the Australian strategy for controlling the outbreak. On social media there are many people calling for stronger and faster government responses, including “shutting everything down.” There is a particular demand for school closures, which are not currently on the cards in Australia.

Some have claimed the Australian government has plans to rely on “herd immunity” to control the outbreak. That’s not the case.

The decision not to close schools is based on data from China, which show that there’s no sign of children and young people playing a role in “chains” of transmission. In addition, closing schools, without making similar arrangements for working parents, might lead to children being looked after by grandparents, who we need to protect at all costs from exposure to the virus. Also, this could have a major impact on the health workforce, many of whom have school-aged children.

The development of immunity is an important question for the longer term management of COVID-19, the coronavirus at the centre of the pandemic. Eventually, many people who contract the virus will become immune and this will help control its spread. This is not a part of the Australian government’s strategy, and the UK government has clarified that it is not its policy either.

Clinical experience suggests people with mild illness may develop immunity around seven to ten days after the onset of symptoms. Immunity is measured by monitoring the immune cells that fight the virus. As these cells showed up, the virus was no longer found in nasal swabs, suggesting immunity may also reduce infectiousness.

2. Can drinking a lot of water, gargling with warm water and salt or vinegar eliminate the virus? What about drinking lemon in hot water, or other home remedies?

Myth. Many people have asked what they can do to “boost their immune system” and there’s no shortage of quacks and scam artists happy to answer that question.

Hot drinks with lemon and honey, vitamin supplements, foods with garlic and ginger, apple cider vinegar, gargling with salt water… none of these things has any impact on your immune response and won’t eliminate the virus.

But if they make you feel calmer and healthier, they can’t hurt. (Except putting vinegar in your nose – that’s not a good time.)

Other myths include that the virus can’t survive above 27ºC (80.6ºF). We can tell this is wrong with a moment’s thought, since it can function in our bodies at 37.5ºC.

Some have claimed that drinking various beverages will help “flush out” the virus, but the virus does its work inside cells. Again, though, hot water with lemon will help you stay hydrated, so it won’t hurt. 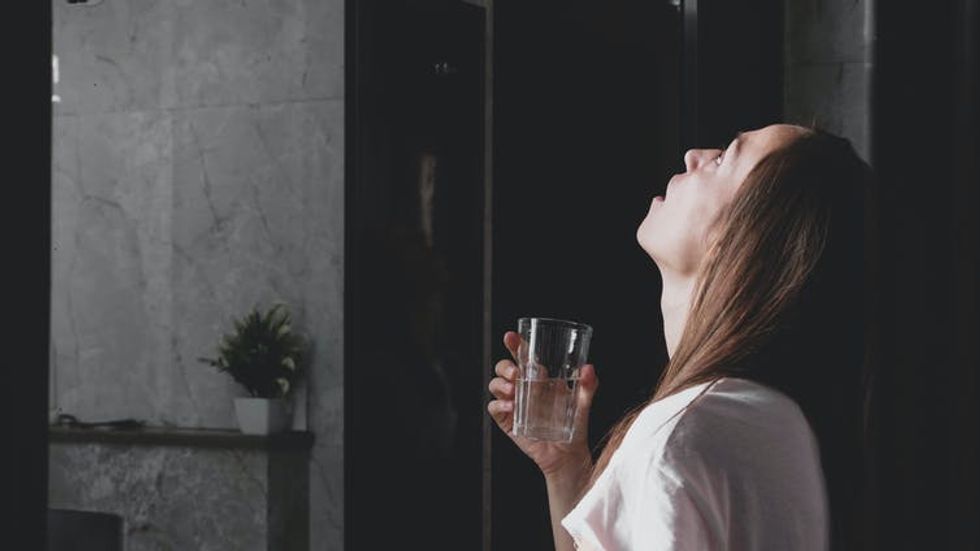 Myth. Nobody should stop taking any medication unless advised to by their doctor.

There was recent speculation that some blood pressure medications that target a protein called ACE2 might worsen the course of infection because the virus also targets that protein.

In response, the European Society of Cardiologists had issued a strongly worded statement saying there’s no evidence to support these concerns, and potential for serious harm if people stop taking their blood pressure medication.

The World Health Organisation has urged people who suspect they have COVID-19 to take paracetamol, not ibuprofen.

Non-steroidal anti-inflammatories (NSAIDS) such as ibuprofen also attach to this protein. In France, some doctors noted that a number of patients who were admitted to ICU had been taking these drugs. It is not clear whether these patients had other conditions which put them at higher risk of being admitted to ICU, or if the NSAIDs were the only risk factor.

This is hotly-debated and we can expect to hear more about it.

5. Can the virus stay living on surfaces for nine days?

We don’t have data on COVID-19, although research on this is likely already happening.

A review of studies looking at similar viruses like SARS and MERS found viral particles can last for some time on surfaces — potentially up to nine days. It depends on a number of factors, such as the type of material, the temperature and humidity, and perhaps even how much of the virus was deposited.

Alcohol-based products were found to be effective at removing virus from surfaces. Wiping down surfaces, washing your hands, and avoiding touching your face remain the best things you can do. 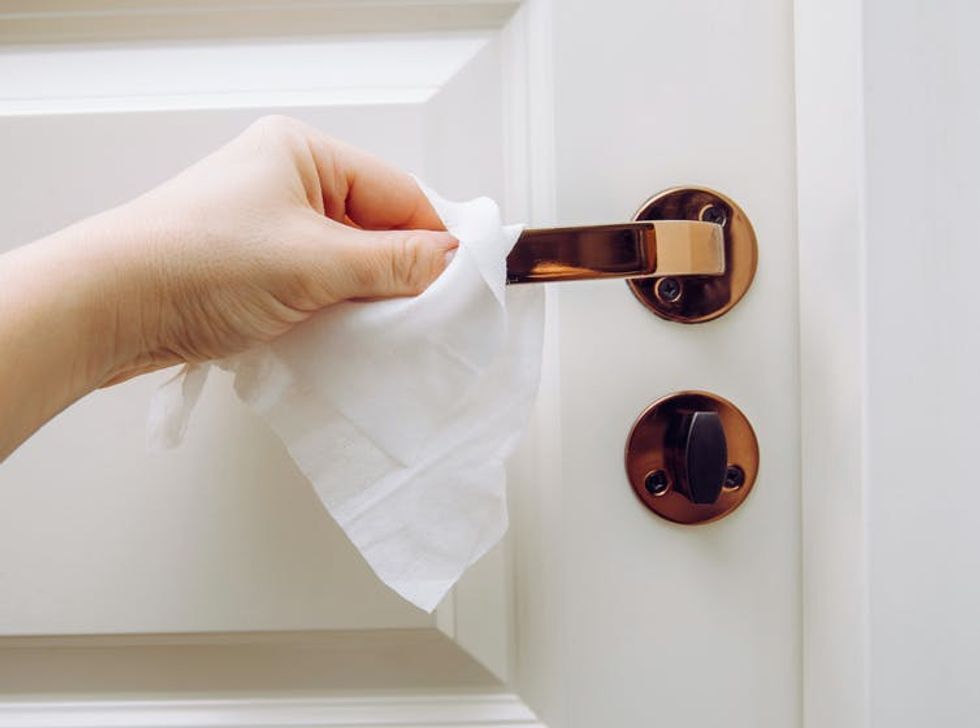 Wiping down surfaces is a good thing to do.

6. Is hand sanitiser not as effective as soap and water?

A science-y fun fact has been circulating on Twitter, saying soap is better than alcohol at disrupting the lipid layer that surrounds viral particles. 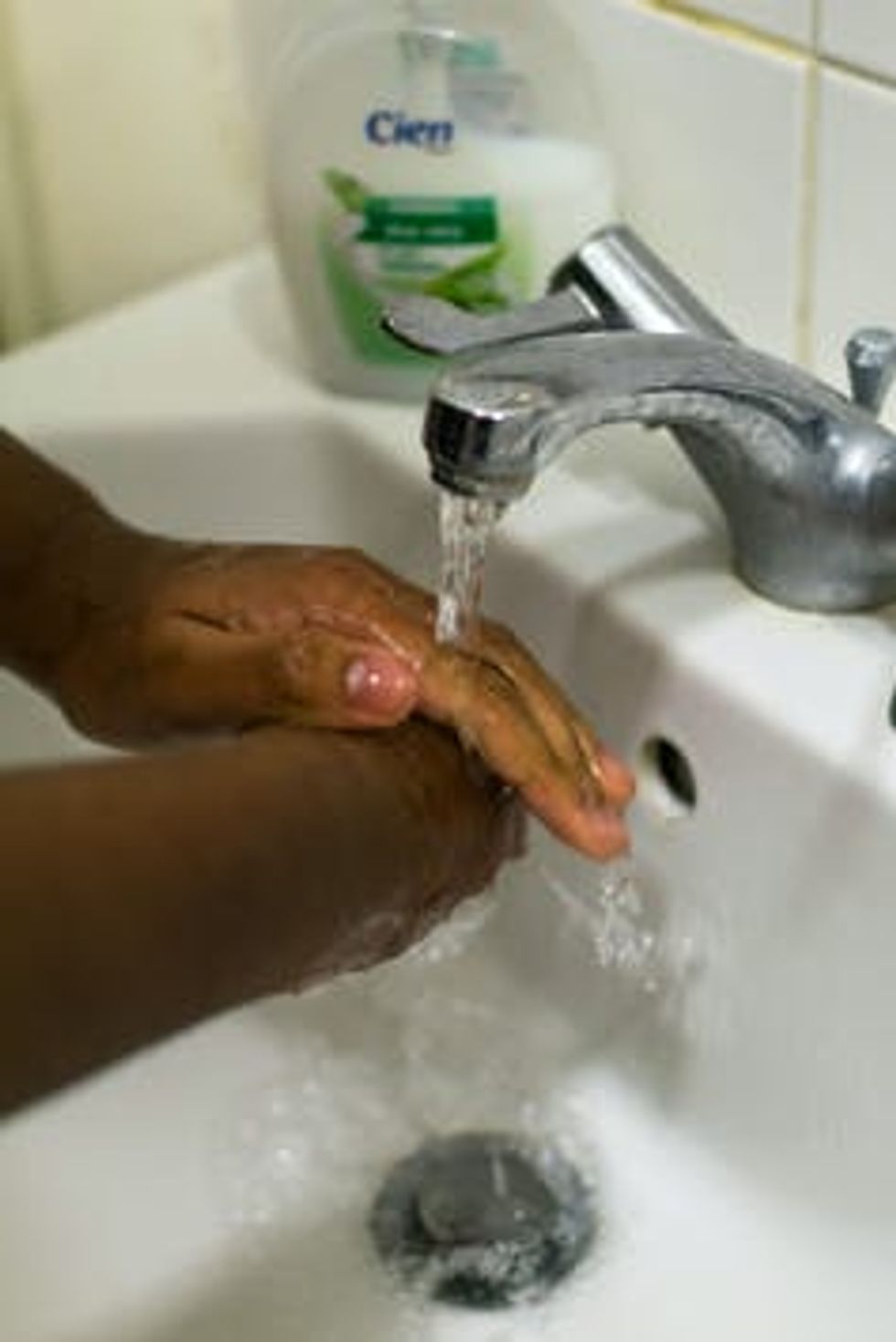 In fact, both soap and alcohol break virus particles apart, but in different ways.

In fact, both soap and alcohol break virus particles apart, but in different ways. Hand washing also works because it washes viral particles off our hands.

Whether you use alcohol or soap isn’t really important - making sure you wash your hand often and thoroughly definitely is.

7. Is Australia the next Italy?

Unlikely. Vivid stories have been circulating about the heartbreaking situation in parts of northern Italy.

However, the lack of testing in Italy makes it hard to know if their outbreak of COVID-19 will be comparable to our own. Australia introduced protective measures much earlier than Italy, including travel deferrals and quarantine for Australians exposed to the virus on cruise ships. It is vital for epidemic control to be based on the facts about our own epidemic.

There is no doubt the COVID-19 outbreak is going to stretch our health system to its limits — but we do not have good reason to fear it will be as bad as stories coming out of Italy.

8. Does COVID-19 only kill sick people and the elderly?

Nope. Based on the experience in China and Italy, experts have challenged the belief that severe illness and mortality only affect older people and people with other serious illnesses. Older people are at the highest risk of serious illness, but the risk to younger people is not zero. 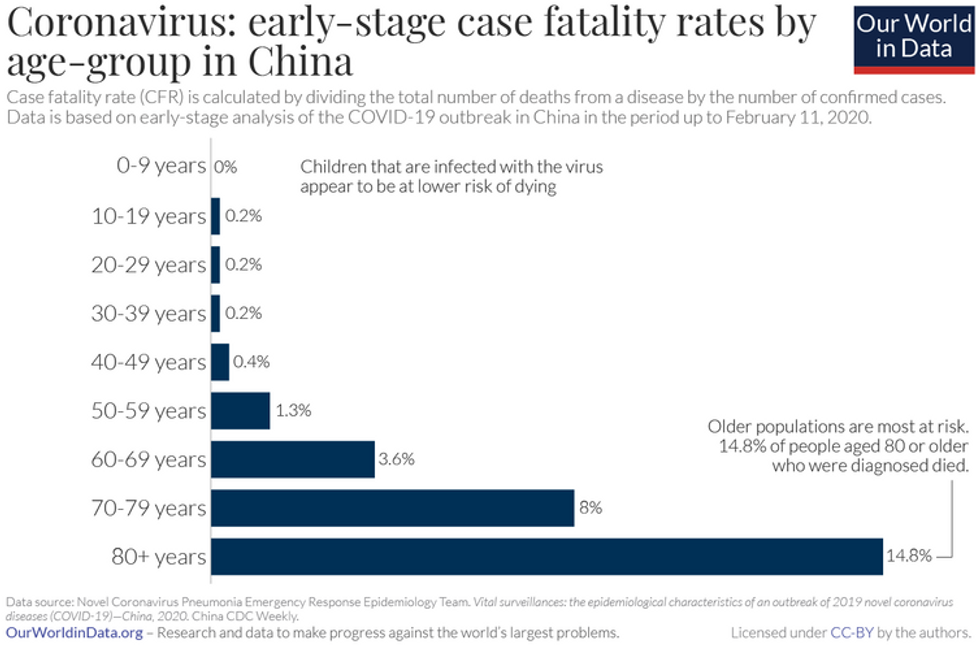 At any rate, people in older age groups are valued and very important members of our community, and nobody sees them as expendable. We can all protect them by following prevention advice and self-isolating if we have any reason to believe we may have been exposed. 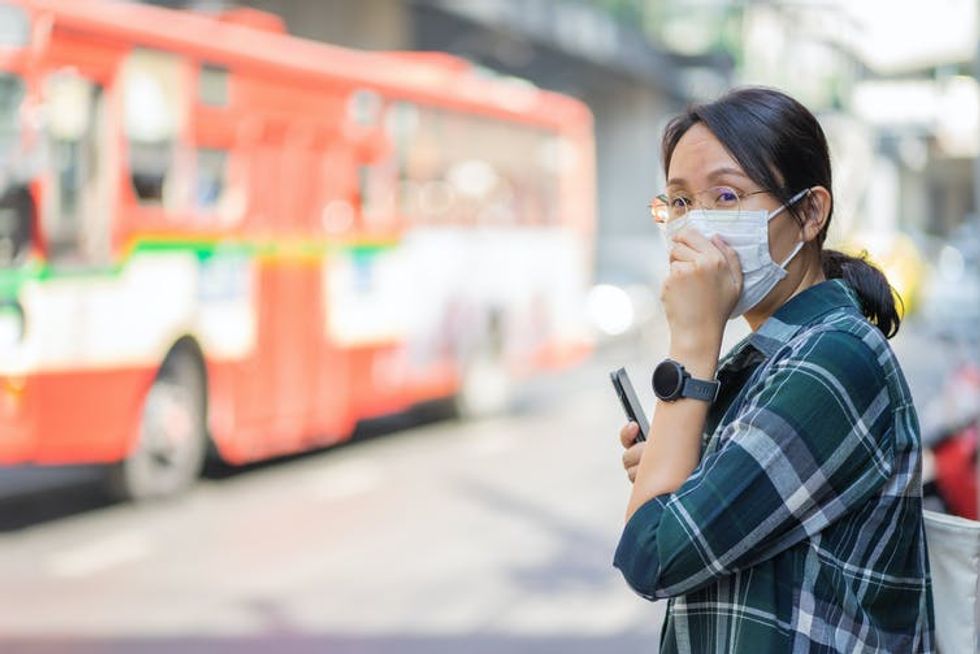 9. Can coronavirus spread through food?

That depends on if someone coughs on your food, or shares your spoon.

Coronavirus spreads via droplet transmission. When someone coughs or sneezes without a mask, droplets of saliva and mucus can fall within a metre or two of the sick person. Most transmission occurs when these droplets make their way into your mouth, nose, or eyes. That’s why hand hygiene and avoiding touching your face are so important.

If you are near someone with coronavirus and they cough over your food, it could potentially make you sick. Sharing cutlery or glasses with people with coronavirus could pass on the infection, as heard on ABC 7.30. However, you are unlikely to catch anything from the avocado you pick out of a basket at Woolies as a consolation prize after missing out on toilet paper.

Why are older people more at risk of coronavirus?

Ned Oliver, Virginia Mercury
A judge in Loudoun County interrupted the testimony of the alleged victim in a felony domestic violence trial last week to question her drug use, sentencing her to 10 days in jail for contempt of court after she said she had smoked marijuana earlier in the day.
She was then “physically removed from the witness stand by multiple deputies," according to a brief filed by the commonwealth's attorney's office, which supports the woman's motion to vacate the contempt charge lodged by Circuit Court Judge James P. Fisher.

The woman, who prosecutors say did not appear intoxicated, served two days in jail before she was released on $1,000 bond, according to court records. Meanwhile, the case against her alleged abuser, who was facing his third domestic violence charge, ended with Fisher declaring a mistrial.

“In the middle of a difficult (cross examination), she was detained, interrogated, arrested and removed from the courtroom," wrote Assistant Commonwealth's Attorney Elena Ventura, who argued the woman was “not treated with the respect, sensitivity or dignity required by law."

Jake Zuckerman, Ohio Capital Journal
New lines drawn by state GOP leaders ousted Sen. Mark Romanchuk, a Republican from Richland County, from the district that elected him to his seat in 2020.

Since the indictment of the former speaker of the House last summer and subsequent guilty pleas from four alleged co-conspirators, Romanchuk has led the charge among Ohio Republicans to repeal House Bill 6, the legislation at the center of the racketeering prosecution.

He has sponsored four substantive bills this legislative session, three of which are aimed to repeal different elements of HB 6 including forcing utility customers to guarantee revenue at 2018 levels for utility company FirstEnergy Corp. (which pleaded guilty to a lesser charge after admitting to its role in a bribery scheme), and another repealing utility customer-funded bailouts to the utility companies that own two coal plants in Ohio and Indiana.