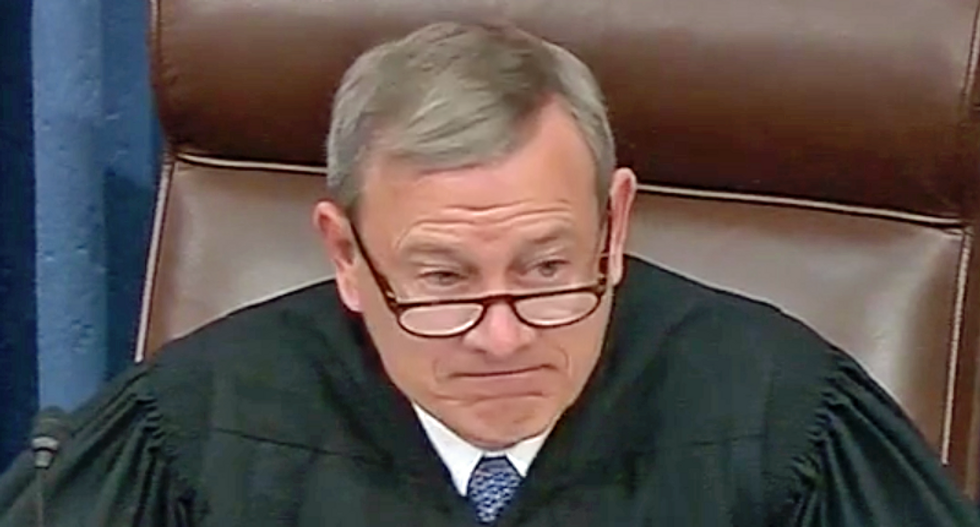 On Wednesday, as the Supreme Court heard oral arguments in an abortion rights case from Louisiana that could effectively render Roe v. Wade useless, Senate Minority Leader Chuck Schumer (D-NY) spoke on the steps, warning Trump-appointed Justices Neil Gorsuch and Brett Kavanaugh that "You have unleashed a whirlwind, and you will pay the price."

A reasonable person would interpret this to mean, they will face public criticism and an erosion of confidence in the judiciary if they move to strike down women's rights. But much of the right-wing commentariat chose to frame Schumer's comments as a "threat" against the justices — and so, apparently, did Chief Justice John Roberts, who issued a rare statement rebuking the Democratic Leader:

"Justices know that criticism comes with the territory, but threatening statements of this sort from the highest le… https://t.co/Wj6xcqFvva
— Lawrence Hurley (@Lawrence Hurley) 1583359099.0

Roberts, more than most of the members of the Supreme Court, is keen to keep up the facade that the court is an apolitical and nonpartisan body. But what makes his choice to single out Schumer particularly noteworthy is that he did no such thing when President Donald Trump chose to publicly single out Justices Ruth Bader Ginsburg and Sonia Sotomayor, and suggest they had no business reviewing his decisions in the first place.

"I just don't know how they can't recuse themselves for anything having to do with Trump or Trump-related," said Trump at a press conference in India, adding that Sotomayor's dissent from the conservative majority's ruling for Trump in an immigration case "was so inappropriate when you're a justice of the Supreme Court."

It is unclear why Roberts apparently has no problem with this statement, but considers Schumer's criticism to be "threatening." But the double standard was not lost on Schumer, who released a statement pointing it out: