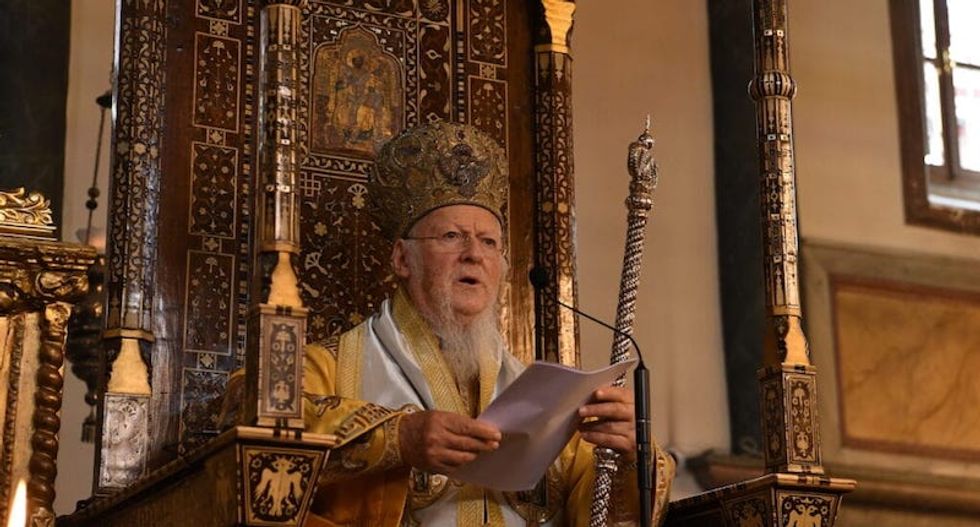 The Holy and Great Synod of the Ecumenical Patriarchate of Constantinople issued a public statement regarding the coronavirus.

If there’s one thing that irks me to no end about the atheist community, it’s the overrepresentation of vocal jerks—and let’s be frank, they’re usually white men—who exhibit smug superiority and a sort of fundamentalist and arguably (post-)Protestant ethos, in nearly all their interactions. While some of these “stable geniuses” style themselves progressives, others identify as libertarians or “classical liberals,” and at least the latter are more honest about what ultimately amounts to their alt-right adjacent, or even fully alt-right, views on matters of race, gender, and “identity politics.”

While I now regularly work with prominent atheists and in atheist spaces, there was a long period during which I refused to accept the label atheist for myself in part due to the toxicity that pervades so much of movement atheism. And part of that toxicity lies in the “rationaler-than-thou” attitude that leads many atheists to interject themselves into any and all discussions of religion that come their way, inserting ignorant cookie-cutter talking points and gleefully making asses of themselves in their ill-informed and indiscriminate religion bashing.

As mirror images of one another, fundamentalist believers and obnoxious atheists both insist that only the most toxic and absurd expressions of religion are “authentic.” Indeed, such atheism is awkwardly Christian-centric in the ways that its adherents ignore, for example, how religion scholars tend to define religion in terms of community rather than in terms of belief in the supernatural, and how, for example, it is entirely possible to be a practicing Jew—even an Orthodox Jew—and an atheist.

Personally, I am an outspoken advocate for the embrace of pluralism as essential to functional democratic politics, and for building coalitions among progressive non-believers and progressive believers around shared values. Anti-pluralist Christians are far more often the targets of my ire than anti-pluralist atheists, but the latter’s implacable insistence on the impossibility of progressive religion, and on the fundamental incompatibility of religion and science, is an endless annoyance and a hindrance to building broad progressive coalitions.

In response to the coronavirus outbreak, however, Christian fundamentalists have made a spectacular show of their rejection of modern science in their pigheaded refusal to adopt common sense public health measures. And even I have to admit that a news cycle like this makes it difficult to object to the common atheist assertion that religion and science are inevitably at odds.

Julie Zauzmer has documented Christians responding both responsibly and irresponsibly with respect to to the danger of the coronavirus pandemic in her reporting, but while even some evangelical churches are taking sensible measures, the defiance of Christian know-nothings has been so extravagant and astonishing that it’s hard to focus on anything else.

For example, as Daniel Schultz noted earlier this week, Right Wing Watch posted video of charismatic Pastor Rodney Howard-Browne encouraging members of his Tampa, Florida-based megachurch congregation to shake hands this last Sunday as he defiantly proclaimed that his church would remain open because the Lord would keep Christians safe there. He added, “This Bible school is open because we’re raising young revivalists, not pansies.”

Asked what factors into the behavior of Christians like Howard-Browne, Zauzmer commented on the decentralization of evangelical Protestant churches vs. more top-down denominations as an issue:

It's easier to close an entire Catholic or Episcopal diocese (or all the Mormon meetings, which was really striking), than to get nondenominational evangelical pastors on the same page, or a denomination like Southern Baptists who pride themselves on local church-level decision-making.

Pressed to comment on deeper motivations, Zauzmer added, “Politics definitely plays a role,” noting that some of President Trump’s false statements about coronavirus have encouraged conservative, mostly white evangelicals—Trump’s most loyal demographic—to rebel against the imposition of public health measures.

And then there are the Greek and Russian Orthodox Churches. To be sure, the Ecumenical Patriarchate at Constantinople, the see traditionally considered “first among equals” in the Eastern Orthodox world, issued a communique that reads in part:

“The Church has and continues to respect medical science. Thus, the Church recommends that all the faithful adhere to the official directives of both the World Health Organization and the pertinent pronouncements and legal regulations issued by the civil authorities of their respective countries.”

So far, so good. But then we get to the next point: “The Mother Church of Constantinople knows empirically from its two-thousand-year existence that Holy Communion is ‘the antidote to mortality’ and remains firm in its Orthodox teaching regarding the Holy Eucharist.” In addition to the awkward invocation of the rhetoric of science (i.e. “knows empirically”)  in its assertion of religious dogma, the Ecumenical Patriarchate’s statement essentially contradicts itself. For their parts, representatives of the Greek and Russian Churches are going so far as to dangerously proclaim that “coronavirus cannot be transmitted through communion.”

That American charismatic and evangelical Protestants are behaving similarly should not surprise us. I’ve been among those documenting not only the affinities between the U.S. Christian Right and prominent Russian Orthodox Christians in recent years, but also the direct ties and collaborative efforts they make to advance an anti-LGBTQ, anti-choice agenda on the global stage.

So, what are we to make of all this? Must we admit that religion, or at least Christianity, is inevitably in conflict with science and as such a threat to humanity’s survival? I turned to Orthodox Christian writer and RD contributor Katie Kelaidis for comments on the Orthodox situation, and to Professor Karl Giberson of Stonehill College, an advocate for the compatibility of Christianity with evolution (for which he was essentially forced to resign from his previous position at Eastern Nazarene College), to comment on the issues raised in this article more generally.

Noting that at least some Orthodox dioceses in the United States are canceling all church services, Kelaidis insists, seemingly contra Constantinople, that “It has never been the teaching of the Orthodox Church that communion is magic. The miracle of transubstantiation does not change the material properties of the bread and wine. That is the miracle.”

I asked Kelaidis what she thinks motivates the kind of irresponsible behavior we’re observing in Greece and Russia (where we have evidence that information about the spread of coronavirus has been suppressed). She referred to a “temptation to over-believe”; to insist on interpretations that defy logic. “Continuing to not take common sense measures against the transmission of a dangerous virus is, frankly, an example of the horrific effects of this over-belief.”

And what does Giberson make of this massive global Christian cluster? “Trump embodies the denial of reality—particularly science—that largely defines the worldview of today's Republican Party,” says Giberson, noting that, while many Christians are taking appropriate measures in response to coronavirus, Jerry Falwell, Jr.’s “pernicious” branch of evangelical Christianity “sold its soul to the Republican Party, which sold its soul to Donald Trump.” He went on:

Decades of ridiculing Darwinian evolution, the Big Bang Theory, climate change, the value of vaccination and so on has created a vast demographic only too willing to nod in agreement when Trump dismisses the coronavirus as a “hoax,” Rush Limbaugh says it’s just “the common cold,” or Falwell says it’s a plot to “get Trump.”

None of this means that all religion is incompatible with science, but if so many Christians are endangering the lives of themselves and others, that is a serious problem that needs to be addressed.

Is there any hope? Giberson muses that with respect to coronavirus, “Fortunately, Trump is finally making contact with reality, so hopefully his followers will do likewise.” Yet even if they do, the larger problem of fundamentalist Christianity as a danger to democracy, human rights, and public health will remain.