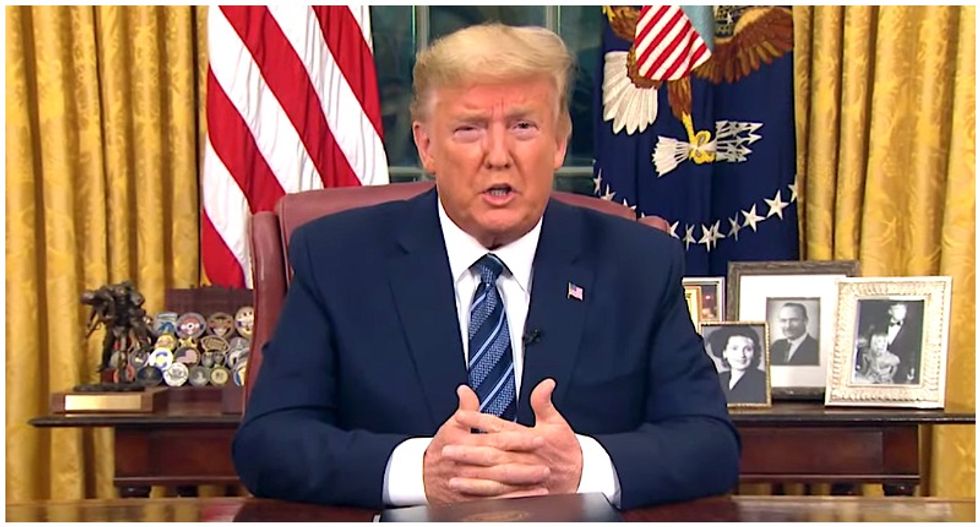 In an op-ed for the conservative outlet Commentary this Thursday, Noah Rothman discussed President Trump's Wednesday night television address where he sought to "convey calm and competence" in the midst of the growing coronavirus outbreak. But according to Rothman, Trump's address did nothing to soothe the fears of most Americans.

"When announcing the travel ban, Trump said that 'these prohibitions will not only apply to the tremendous amount of trade and cargo but various other things as we get approval. Anything coming from Europe to the United States is what we are discussing.'" Rothman writes. "But the White House soon clarified that travel restrictions would not apply to goods exchanged between the U.S. and its largest trading partner, the European Union. This was no small error. Rather than calm markets, as the president has tried so hard to do over the last few weeks, this misstatement sent stock market futures into a tailspin."

There were other misstatements as well in Trump's messaging, all developments that came after a televised speech that "was calibrated to please everyone and therefore likely reassured no one."

"In the hours that followed Trump’s speech, the White House, the Department of Homeland Security, and the State Department scrambled to clean up the mess left by the president," writes Rothman. "There is no excuse for that kind of carelessness in a prepared address to the nation, much less one given amid emergency circumstances."

Ultimately, according to Rothman, the nation was more confident before Trump spoke than after.

Read his full op-ed over at Commentary.