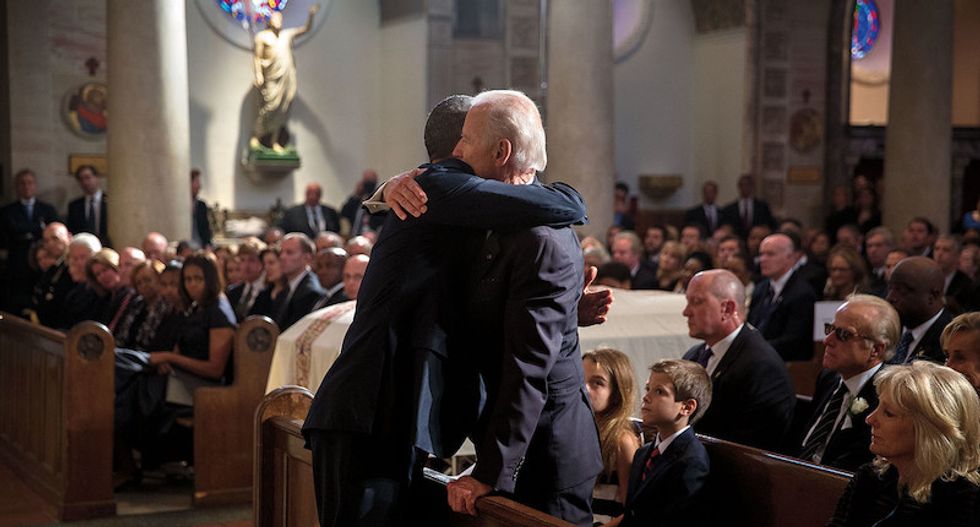 I would urge anyone reading this headline to take it with a large grain of salt: "Most Americans Don't See Democratic Candidates As Very Religious." Like many such stories, it's true enough: 56% of Americans polled by the Pew Research Center think that Joe Biden is very or somewhat religious. It goes downhill from there: 36% for Elizabeth Warren, Bernie Sanders 34%, Pete Buttigieg 32%.

As you might expect, Republicans are driving the results: only 37% see Biden as religious. The rest get just 22% apiece. This will surely get some people yelling about how Democrats need to talk more about faith if they want to win in conservative states! Some of those people might even be people who aren't consultants making their living off Democrats Talking About Faith.

But even a cursory second glance at the numbers tells a different story: 7% of poll respondents say they haven't heard enough about Biden to answer the question. It's 6% for Sanders. But it's 15% for Warren and 30% for Buttigieg (who's since dropped out). In other words, most people know who Biden is, and that he's a staunch Catholic. And most people know who Sanders is, and that he's...well, he turned out about religious as many other Jewish kids raised in Brooklyn who became socialists and moved to Vermont. Which is to say, his Jewishness doesn't map neatly onto what many Americans recognize as "religious."

But not as many are familiar with Warren or Buttigieg, even though both of them would happily talk your ear off about their faith. Here's a profile of Warren's pastor by Jack Jenkins, and a piece on Buttigieg's attempt to co-opt the banner of the religious left, also by Jack Jenkins. Their religious message doesn't seem to be getting through, because none of their messages are getting through. If you asked about Amy Klobuchar or Tom Steyer, you might get even higher "not religious" responses, despite Klobuchar being a member of the United Church of Christ and Tom Steyer an Episcopalian. Why? Because people don't know them.

So no, this isn't a good reason to wind up the church organs on the campaign trail. If Pew is right, when voters know about a candidate, they're generally able to identify that candidate's level of religious practice. For example, when Pew asked the same questions in 2016, their respondents accurately saw Barack Obama as religious, and Donald Trump as not. The big exception that year was that only about half thought Hillary Clinton religious, though as Pew pointed out, that was sharply higher than when she ran in 2008. Perhaps not coincidentally, 2016 was flooded with stories about how Hillary Clinton had a quiet kind of faith that she didn't like to talk about.

What all of this suggests is that faith messaging works to the extent that any messaging works. Friendly voters who pay attention to the candidates generally get it. Opponents won't, no matter what you do. (If you don't agree with this, go back and read the immediately preceding paragraph again, digesting the part about Hillary Clinton.) People can't or don't need to be persuaded that a candidate gets religion. They'll come to that conclusion on their own.

Likewise, it would be easy to interpret Biden's win in South Carolina as a ringing endorsement of faith outreach. After all, Biden announced back in December that he had been endorsed by over 100 pastors and other religious leaders in the Palmetto State, and he apparently reaped the reward, taking home 56% of primary voters who attend church once a week or more, and 46% of occasional attenders, both enough to win each category. Bernie Sanders, meanwhile, won those who never attend worship with 36%.

But without context, these numbers might be misleading. For one thing, as Jack Jenkins points out in yet another piece, the black churches aren't the unilateral power center they used to be in their communities. Black Americans are growing more secular, like whites, albeit at a slower pace. For another, it seems to have been a last minute—and pragmatically secular—endorsement by Rep. James Clyburn that saved Biden in South Carolina.

And if faith outreach were to be a deciding factor in South Carolina, it might be expected that the winner would clean up among conservative voters, and perhaps not so well among the liberals. In fact, while Biden did perform considerably better among "moderate-to-conservative" voters than among liberals, he actually cleaned his opponents' clocks across the political spectrum, just like he did by nearly every other way of slicing the electorate. Other than the non-religious, Sanders won with young voters and those who didn't like Biden. Other than that, the former vice-president romped, especially with Black voters, who made up 56% of the field.

None of this is to say that having a good ground game among the religious set isn't important. It is. Just like it's important to reach out to the Black community, and Asian communities, and women, and so on. But by the same token, religious outreach isn't more important than any of the others, and having a candidate who's widely recognized as a faithful person isn't a sure thing. If it were, Donald Trump would have been an also-ran to Ted Cruz and Ben Carson in 2016.

Nor is this an argument that faith-based messages are themselves positive or negative. Rather, it's a reminder that religion cannot be easily separated from the social, cultural, and political contexts in which it's found. Biden won among conservative voters who are also churchgoers who are also (many) Black, because he was endorsed by a Black politician who has a long history of supporting liberal expressions of faith. So did he win because he appealed to Black voters? To Christians? To conservatives? Well, yes and no, to each. This much is certain, however: if he wants to keep winning, he's going to have to get the message out to all those categories, and more.