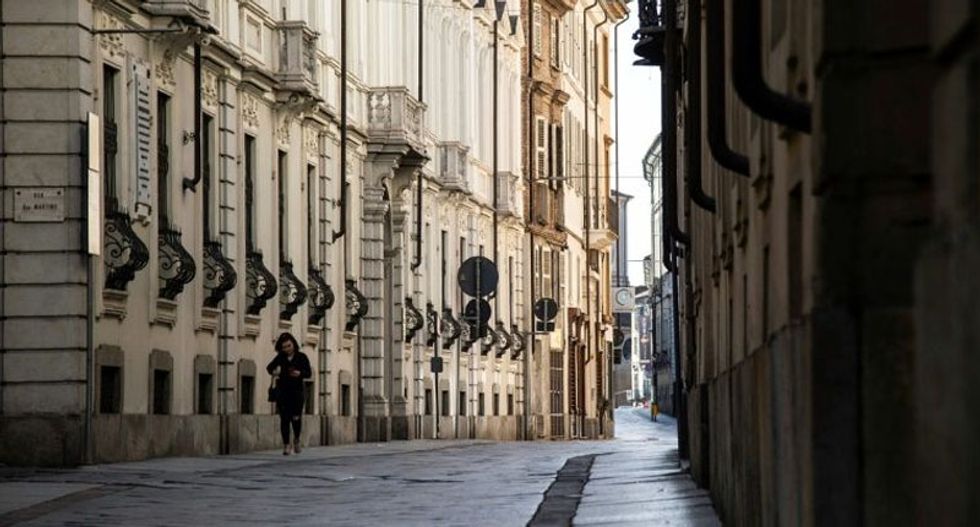 The sun shone on deserted squares in Milan and empty gondolas in Venice on Sunday as a quarter of Italy's population came to grips with being cut off from the rest of the country, under new rules strictly limiting movement in and out of the new red zone.

While some packed their bags and fled, most in northern Italy stayed to brave a lockdown imposed by the government on some 15 million people, as it ramps up the fight against the deadly coronavirus.

The country on Sunday recorded the second-highest coronavirus toll in the world, after reporting a sharp jump in deaths -- from 133 to 366 -- and overtaking South Korea on infections.

Italy's interior ministry said anyone flouting the lockdown risked at least three months in jail or a 206 euro ($233) fine.

Only people with a "serious" reason that cannot be postponed, such as urgent work or family issues, will be allowed in or out of the quarantine zones, which cover Lombardy and 14 provinces in four other regions.

Police will be setting up controls at train stations to check people's temperatures, and stopping all cars on main roads in and out to verify the reason for travel, the ministry said in a statement.

Cruise ships will be forbidden from docking in Venice, with only passengers who are residents of the Renaissance city allowed to disembark.

Alitalia suspended national and international flights to and from Milan Malpensa airport, and announced it was operating only domestic routes from Milan Linate.

The borders with Austria, Switzerland and Slovenia remain open.

Pina Antinucci, a psychoanalyst in her 60s who lives in Milan, told AFP she was suffering nightmares and felt the state was "bombarding us with anxieties, spreading paranoia".

"I'd like to know if I'm infected... it would be better to know if I have that unwanted guest who occupies our homes, minds and lives," she said.

With 366 fatalities, Italy has recorded the most deaths from the COVID-19 disease of any country outside China, where the outbreak began in December.

The new rules came shortly after the news that the number of people infected had jumped by over 1,200 in a 24-hour period.

The plan was leaked to the media on Saturday, infuriating Prime Minister Giuseppe Conte, who slammed it as "unacceptable", saying it had created "uncertainty, anxiety, (and) confusion".

Expert Massimo Galli, the head of a team of doctors from the Biomedical Research Institute in Milan who managed to identify the Italian strain last month, told AFP it had been a "disastrous communication error" and "absolute idiocracy".

"The draft of a very harsh decree is leaked, sparking panic and prompting people to try and flee the (then) theoretical red zone, carrying the virus with them," he said on social media.

Vincenzo Tosetti, a 34-year old actor and Venice resident, told AFP "many people I know have fled, mainly from Milan.

"This is going to test the Italians' ability to behave responsibly, and I have to say that up until now they've been failing. There's been an exodus".

Fellow Venetian Giancarlo, 49, who did not want to give his last name, said "you can feel the anxiety in the air".

The floating city was also virtually empty of tourists, which was "a big blow".

"First the city was hit by record floods, now this. Venice is very fragile right now," he said.

Italy has found itself at the forefront of the global fight against the virus, with more than 5,800 infections recorded in the past seven weeks.

The virus has now spread to all 22 Italian regions, and the first deaths are being recorded in Italy's less well medically equipped south.

The head of the Puglia region in southern Italy pleaded with anyone thinking of returning from Lombardy and the other 11 provinces in lockdown -- which include the cities of Parma and Rimini -- to "stop and turn around".

"Get off (the train) at the first station, don't get on the flights to Bari and Brindisi, turn your cars around, get off the bus at the next stop. Don't bring the epidemic to Puglia," he said on Facebook.

"You are carrying to the lungs of your brothers and sisters, grandparents, uncles, cousins and parents the virus that has severely strained the health system in northern Italy," he said.