From licking floors to praying for an inept government: America's churches react to the coronavirus 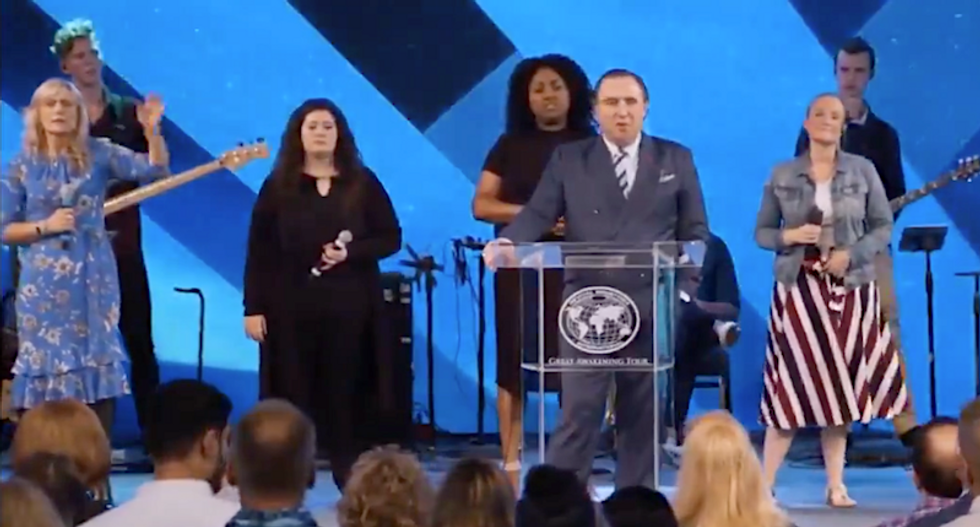 It's particularly important for churches that continue to meet during the COVID-19 pandemic to follow the guidelines laid out by health experts given that worship services are among the largest regular gatherings in modern society, among the most physically intimate, and likely include the greatest number of vulnerable people. Even single members of large congregations can have a dramatic effect on how coronavirus spreads or doesn't, as South Korea found out the hard way.

While many aren't meeting at all or are streaming services, some churches that do meet feel like they need to support those who need it, in worship or otherwise. My mother's congregation in Madison, Wisconsin elected to close for a week or two, but also voted to continue to allow Alcoholics Anonymous and other twelve-step programs to continue to meet in their building, at those groups' discretion.

And some have a message to deliver:

[The Rev. Graylan Hagler] preached a fiery sermon for the small congregation, denouncing the Trump administration for spending money on a border wall while cutting public health teams that might have otherwise been ready to respond to the pandemic.

Other Christians seem less pro-social, let us say. Pastor Rodney Howard-Browne, a Tampa Bay televangelist, equated changing habits in an effort to "flatten the course" with weakness, declaring that his congregation wouldn't adjust their behavior in worship because they weren't "pansies."

Others are willing to go some lengths to show they just don't believe in this whole coronavirus thing:

In Arkansas, the Rev. Josh King met with the pastors of five other churches on Thursday to decide whether to continue holding service. Their religious beliefs told them that meeting in person to worship each Sunday remained an essential part of their faith, and some of their members signed on to Trump’s claims that the media and Democrats were over-blowing the danger posed by the virus.

“One pastor said half of his church is ready to lick the floor, to prove there’s no actual virus,” said King, lead pastor at Second Baptist church in Conway, Ark.

“In your more politically conservative regions, closing is not interpreted as caring for you. It’s interpreted as liberalism, or buying into the hype,” said King, whose church draws about 1,100 worshipers on a typical Sunday.

I'm not sure what's daffier or more offensive: the notion that God's supposed demand for adherence to rigid gender roles outweighs protecting vulnerable members of the community, or the idea that coronavirus is just a conspiracy theory cooked up by liberals—never mind the insanity that it's Christians' duty to protect a president from political attacks. (On a separate note, floors aren't particularly known to be COVID-19 transmission agents. They might get plenty of other nasty bugs that way, though.)

Like the Trump administration's bumbling efforts, these local responses to the current situation relate back to conceptions of truth on some level. On the one hand, while there's a recognition of the coronavirus' power, there's a sense that it's more important to preach a message of comfort or a word of judgment against the White House.

On the other hand, there's a denial of the reality, and a desire to demonstrate a counter-power in butch demonstrations of faith in God, or the inscrutable gnosticism of believing it to be nothing more than a liberal plot against God and country—and God and country's designated representative, Donald Trump.

Religious types aren't the only offenders, either. Twitter was on fire over the weekend with sightings of young folks partying it up, apparently either in the belief that COVID-19 wouldn't affect them, or in simple defiance of health experts:

Killing Grandma to own the libs is a heck of a political stance, to be sure.

Continuing to participate in massive boozefests seems ill-advised at best, downright irresponsible at worst. So does prompting a large congregation essentially to flip public health measures the bird.

Yet I want to hold back at least a bit of judgment. For one thing, the nation has hardly been getting clear signals from the top on how to respond to coronavirus. Sure, there are all kinds of reminders about what to do; but then there's a president who mutes or undermines every single message his own administration puts out.

For another thing, this is a very abnormal time in what has been a very abnormal three years. The craving for some kind of ordinary life is readily apparent across all kinds of social boundaries. However unfortunate their methods, people will fight to maintain homeostasis. My own family went out for dinner on Friday night, and were pleased to do so knowing that in particular service workers will need the money in coming weeks. Tomorrow our son will go to school for one last day, and I'll keep a coffee date. Life goes on, one way or another.

At the same time, it seems spectacularly incompatible with the declared teachings of most religions to act so recklessly when so many lives are in the balance. So I'd like to propose a variation on Pascal's famous wager: if you act as though COVID-19 were a real menace and you turn out to be wrong, you've lost nothing more than a few handshakes in church. But, if you blow the threat off and it turns out to be much more dangerous than you thought, you're potentially responsible for the deaths of hundreds, if not thousands, of people. Pascal's countryman (and NBA star) Rudy Gobert learned this the hard way.

Wouldn't it be better in the eyes of your fellow citizens and whatever power you believe in to have erred on the side of caution? Or, you know, sure, don't be a pansy. Go ahead and put the vulnerable at risk to make America great again. Super idea. And to my fellow Christians: St. Peter will no doubt be a big fan of that one at the Pearly Gates.