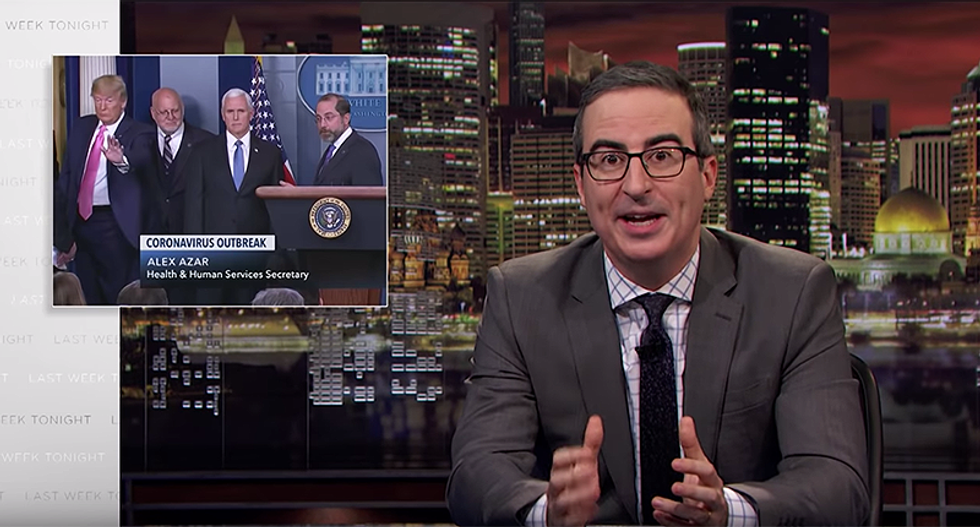 "Last Week Tonight" host John Oliver began his Sunday show by blasting President Donald Trump and his administration for the complete failure on the response to the coronavirus in the United States.

He began with the president's knack for making up facts about the coronavirus, only to be contradicted in the next breath by the experts he's with.

"It now seems that every Trump press conference has to come with an epilogue from an expert clarifying all the things he just got wrong," said Oliver.

"If I could just jump in here," Oliver said, pretending to be an expert refuting Trump. "The president just said we'll get a cure very quickly. It's more likely it will take at least a year. He also said that it's the 'meanest virus he's ever seen.' That's ridiculous. It's a virus. It has no intent. You also saw the president assure us that you can't catch the virus 'sucking on Ds.' I then mistakenly asked, 'Ds what?' To which he replied, 'Ds nuts,' and demanded a high-five. While I cannot believe I have to say this, depending on the nuts we cannot say for absolute certainty that you would not get the coronavirus from sucking on 'dose' on 'dose nuts.'"

He noted that it isn't always that the Trump administration is dolling out bad information; at times, they're refusing to answer at all.

Vice President Mike Pence gave a press conference Wednesday on the state of the virus, where he assured the nation that insurance would cover the testing for the coronavirus. It's a fact that has been questioned by health experts who've researched the way Pence said it would be funded. But as Pence exited the press room, a reporter was shouting, "what about people with no insurance?!" Pence aides were caught on camera shaming the reporter for shouting the question

"Screaming for the camera isn't going to get you anywhere," the aide said.

"Well, how about answering the question?" the reporter asked. "It's a valid question!"

Indeed, it's a concern that many Americans will face as the virus spreads throughout the country.

"Yeah, it is a valid question," agreed Oliver. "He's asking if nearly 30 million uninsured Americans will have access to a test for a deadly, contagious virus. That is relevant.

However, the worst moment came when Trump visited the Center for Disease Control in Atlanta on Friday, where he attacked the governor of Washington, asked if his town hall on Fox News got good ratings, and bragged about the doctors at the CDC thinking he was smart.

Trump then spent the rest of his time at the CDC promising that anyone who wants a test can have one, even though there aren't enough tests, and Pence already had to counter that not everyone gets a test, particularly, it seems, the uninsured.

Watch Oliver unleash on the administration below: